Reconomy partners with Balfour Beatty Living PLaces and HMP Foston Hall in Derby and recycles deconstructed lamps whilst giving inmates a wage and invaluable work experience, helping them into employment upon release. 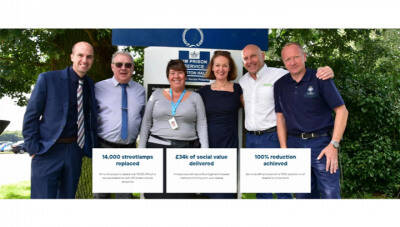 In 2017, discussions between Balfour Beatty Living Places and Reconomy took place regarding a major project to replace 14,293 decommissioned streetlamps in Derby, which were being upgraded to LED lanterns at an investment cost of £2.8m.

These discussions identified the potential to move this ‘difficult’ type of WEEE waste further up the waste hierarchy, reducing both the environmental impact and the energy consumption required for disposal. The goal was to do something more than simply divert the lamps away from landfill. Already aware of potential social value opportunities in the area, Balfour Beatty Living Places’ Supply Chain Manager approached HMP Foston Hall in Derby about giving women in custody at the prison the opportunity to ‘earn and learn’ by receiving training on how to deconstruct the streetlamps.

This would allow the deconstructed lamps to be fully recycled, as well as give inmates a wage and invaluable work experience to help them into employment upon release.

Reconomy’s role was to manage all logistical requirements via its network of supply partners, including transportation of the lamps to Foston Hall and setting-up the prison’s on-site segregation system. Reconomy also negotiated with one of its preferred suppliers, Ward Recycling, to pay the labour costs of prisoners working on the project. To provide a full audit trail for Balfour Beatty, Reconomy also collated all waste data and waste transfer notes. Once dismantled, the mixed streetlamp elements in need of recycling were plastics, polycarbonate glass, aluminium, copper, light iron and steel. These were sent for reuse across the automotive, rail and aerospace industries, reducing the need for virgin materials. Plastics were also turned into 1,100 litre wheelie bins for use within the clinical and medical industries. Typically, a team of 10-12 inmates worked on the project at any one time, with involvement considered to be a privilege, helping to encourage good behaviour. The prison also established a team of ‘waste champions’ (typically offenders serving long sentences), who then gave training to newer members of the team.

One of the project’s biggest concerns was bringing materials into the prison that had the potential to be weaponised. For this reason, the lamps were first sent into a fixed Balfour Beatty Living Places depot, where all glass fragments and bulbs were removed for separate recycling. To safeguard against the theft of tools, a ‘shadow board’ was installed in the prison’s workshop, making it immediately apparent if any tools were missing at the end of each working shift.

Due to Foston Hall being classified as a ‘closed’ facility, simply getting the lamps in and out of the prison required meticulous planning. Fortunately, the partnership was able to rely on the expertise of Ward Recycling, which already held a contract with Foston Hall for general waste disposal, and so was able to give suitable guidance. Strict guidelines were put in place for deliveries and collections, which all required pre-booking. Vehicles also had to remain a certain distance from perimeter fencing and were subjected to impromptu checks.

The initial project ran from August 2017 until December 2018, with 14,293 streetlamps replaced and 113.43 tonnes of waste processed, requiring a total of 158 waste movements. Through the project’s innovative working practices, 100% recycling was achieved with no landfill requirements. The project is estimated to have saved £50,000 in procurement and waste disposal costs, while the newly installed LED lamps also created a significant saving for Derby City Council, reducing energy consumption by 80% and saving £307,000 a year. The direct benefits to both the prisoners, and wider society, have also been considerable. In addition to receiving a financial wage and new skills, inmates have become more familiar with the disciplines of a working environment, increasing their chances of finding and staying in work upon release, reducing the likelihood of reoffending. To date, 65 women prisoners have taken part in the project.

Due to the project’s success, the partnership between Balfour Beatty Living Places, Reconomy, Ward Recycling and HMP Foston Hall has continued. Foston Hall’s workshop remains in regular use, and a pipeline of recycling work has been established from other Balfour Beatty projects. The prison has now committed to recycling an additional 35,000 decommissioned streetlamps from Sunderland and South Tyneside. As a result of this long-term commitment, Foston Hall is now able to deliver formal training to inmates, including NVQs and BTEC qualifications. To ensure the partnership offers real employment outcomes for ex-offenders, Reconomy has established a system with HMP Foston Hall to identify offenders who have gained waste management skills and experience and, upon release, would be interested in a role in the waste management industry. Reconomy has also recently facilitated the employment of an ex-offender directly with Ward Recycling.