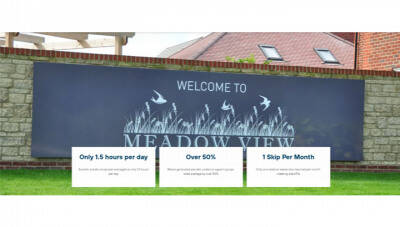 Meadow View is a flagship housing development of Barratt Homes, that will deliver a total of 133 new 2, 3, 4 and 5 bedroom homes. Situated in Watchfield, near to Swindon; construction work on Meadow View began in February 2015, with a completion date set for autumn 2018.

From the outset, Barratt Homes set a number of on-site waste reduction KPIs that were agreed with Reconomy, Barratt Homes’ principle waste management service provider. These KPIs included: undercutting Barratt Homes’ group-wide average of generating 6.63 tonnes of waste per build plot, and utilising a maximum of only one skip per month to dispose of residual (light mixed) waste. To achieve this an innovative approach was called for.

Historically, the disposal of residual (light mixed) waste in skips has delivered poor return on investment for housebuilders. Bulky materials such as polystyrene and insulation can quickly fill a skip, increasing the regularity of exchanges despite their minimal weight.

In September 2015, Meadow View became one of the first housebuilding projects in Barratt Homes’ Bristol division to implement Sustain-a-bale following a successful trial at their Horsehill Meadows project in Shepton Mallet.

For Sustain-a-bale to reach its full potential, a disciplined approach to on-site waste minimisation is required. To achieve this, attitudes towards waste segregation were carefully managed at Meadow View from the outset, with its importance regularly communicated down from the Site Manager. All site personnel also received training on segregation practices from Reconomy’s Site Liaison Officers.

To manage waste segregation at source, the decision was taken to collect and deliver light mixed waste to the baling area in one tonne dumpy bags. This has provided several unique advantages, with the bags being easy to distinguish from the mini-tippers used to segregate other waste. Because the dumpy bags are often moved around site by hand, it has also made identifying cross-contamination far easier, with a bag’s weight alone indicating good or bad segregation.

Bale collections have also been regularly scrutinised, with the schedule being reviewed as frequently as every month. At times of heavy waste build-up, collections have been swiftly changed from monthly to fortnightly services, and then switched back once any backlog has been cleared.

12 months on from the installation of Sustain-a-bale, a further seven housebuilding sites within Barratt Homes’ Bristol division are now using the system, however Meadow View remains the model for best practice.

Meadow View is now operating for up to nine weeks without a skip exchange for supplementary residual waste, exceeding the site’s KPI. Meadow View has also significantly undercut Barratt Homes’ group-wide average of generating 6.63 tonnes of waste per build plot, currently operating at an impressive 2.8 tonnes per plot. Critical to the success achieved at Meadow View has been the regular engagement between Reconomy and Barratt Homes at Construction and Commercial Director level. This has led to positive attitudes towards waste minimisation being adopted at site-level.

Examining the daily manpower needed tooperate Sustain-a-bale provides an excellent example of the difference this attitude can make. Labourers that had previously worked on sites where waste segregation was not as disciplined were heard to comment that Sustain-a-bale had become an “all-day process”. This was because so much additional time was needed to separate contaminated waste when it arrived at the baling area. In contrast, the efficiency of segregation at Meadow View meant that Sustain-a-bale operations were only taking an average of 1.5 hours per day to complete.