Anticipation is sky high as COP26 UN climate draws closer to date. The COP26 summit will bring parties from over 190 countries together to acknowledge and discuss the global climate crisis. 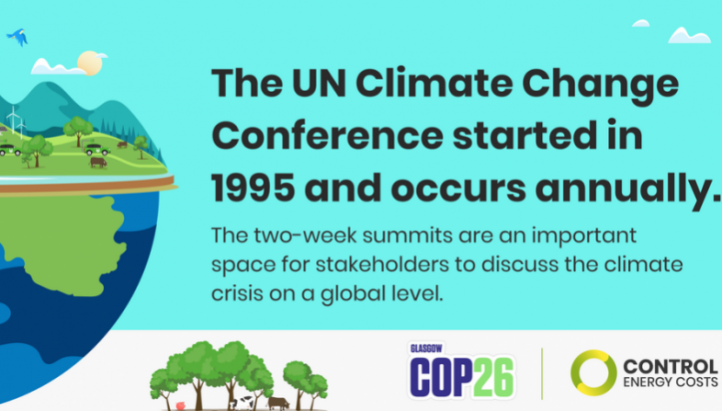 Representatives from all over the world including world leaders and negotiators are expected to attend. The UN’s climate summit was delayed by a year due to Covid-19 but now has the go ahead to proceed during the first two weeks of November.

The two week event is co-organised by the UK and Italy, which describe it as “the world’s best last chance to get runaway climate change under control.”

This year’s COP26 that will be held in Glasgow has been predicted to be a “tsunami of ambition” by Claire O’Neill, managing director of climate and energy (WBCSD). The UK will be working with all countries involved to take the necessary actions to fight climate change and global warming. There will also be discussions and debates over countries’ targets for this cause and submissions of “nationally determined contributions” (NDCs), pledges that explain how countries plan to go green and reduce emissions.

UK Prime Minister released a statement ahead of COP26:

“Securing a brighter future for our children and future generations requires countries to take urgent action at home and abroad to turn the tide on climate change. It is with ambition, courage and collaboration as we approach the crucial COP26 summit in the UK that we can seize this moment together, so we can recover cleaner, rebuild greener and restore our planet.” – Boris Johnson

The goals of COP26

The main objective of COP26 is for the world to achieve net zero or ‘carbon neutrality’ by year 2050, a target set at COP21 in 2015 when the Paris Agreement was reached. The Paris Agreement is a legally binding international treaty on climate change with a goal to limit global warming to well below 2 degrees Celsius.

COP26 will require all countries to outline how they plan to lower their greenhouse-gas emissions. A legally binding treaty, it has nearly 200 countries signed on to reduction targets.

There are specific goals that need to be achieved at COP26. But what are they?

These goals are certainly attainable but seem complex due to the alarming rates of energy consumption and carbon emissions in the atmosphere. To reach these targets, countries will need to implement new strategies such as switching all vehicles to electric, phase-out coal consumption, invest in renewable’s and much more. Critics have said the 2015 targets will not achieve zero emissions in time and experts say more substantial country commitments are needed.

The summit will be used to encourage countries to protect and restore their ecosystems. It’s important for all to build a strong and resilient infrastructure and agriculture to avoid loss of homes and lives. COP26 is the world’s last best hope to limit global warming with the summit’s tagline being “make a plan for our future”.

Funding for the cause

When talking about finance, it’s crucial that the more well developed countries aim to mobilize at least $100billion in climate finance per year. We need international financial institutions to participate in this scheme too to help poorer countries provide funding towards net zero. Reports have shown that some countries have not stuck to their $100billion target, and the USA pulled out whilst Donald Trump was in presidency. Now that Joe Biden is in power he has re-invested $11billion back into the cause and has promise to provide more funding.

In a statement, a COP26 spokesperson said “We are committed to hosting an inclusive summit in two weeks’ time, which showcases innovative work from a range of businesses and civil society groups who are committed to tackling climate change together.”

The conference outcome could determine whether the world can meaningfully limit global warming.