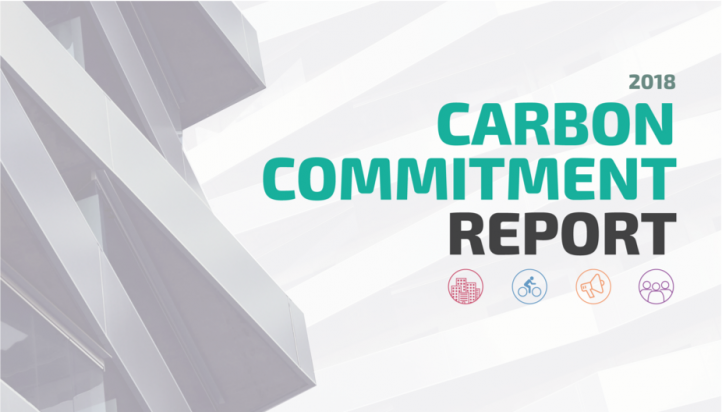 A independently commissioned report has found a real lack of commitment amongst UK businesses to drive sustainable change, with only 10% having set a carbon reduction target – while just under half of companies (49%) use even the most basic sustainability measures, such as recycling bins for office waste.

The findings follow the recent and most comprehensive study to date into climate change by the Intergovernmental Panel on Climate Change (IPCC), which made headlines worldwide. The IPCC report was the most extensive warning yet on the risks of rising global temperatures, with leading international scientists saying it was the final call to save the world from climate catastrophe.

‘The Carbon Commitment report’ from energy performance and carbon management experts, Carbon Intelligence, found that out of the 1,000 heads of sustainability and business owners questioned, none had set science-based targets. Science-based targets demonstrate a company’s commitment to a low carbon future and reflect the level of action needed globally to help the world align with the Paris Agreement – the pledge by nearly 200 countries on tackling climate change and a commitment to keep global warming below 2°C.

A further 1,000 junior managers and below were also questioned and more than half (57%) said their employers aren’t doing enough to involve them in cutting their carbon footprint at work.

While many organisations’ lack of transparency and engagement means that 74% of employees have no idea what their organisation’s carbon reduction targets are and 57% of those questioned said they don’t, or don’t always trust UK organisations to deliver on their sustainability claims.

Just 14% of large businesses with over 250 employees have set staff personal goals and targets to cut their own workplace carbon footprint, only 9% incentivise staff to save energy at work, and a mere 7% regularly communicate internally the energy savings made and the benefits of any savings to their business and environment.

Only 4% of employees said their organisation links staff bonuses to cut carbon emissions and to save energy at work (despite 66% of employees saying they’d support such a scheme), and only a few offered other incentives to reduce employees’ individual carbon footprint such as increased annual leave, or financial benefits for cycling to work. In fact, just 13% said they have an official company ‘car share’ policy and 12% have a ‘cycle to work’ scheme.

71% of employees have resorted to taking their own action to cut their carbon footprint at work in the last six months, but not necessarily in the right areas.

Shockingly, when asked for their most innovative ideas for cutting workplace energy use the main ideas comprised, banning personal mobile devices (3%), or old-fashioned suggestions such as foil to cover walls (3%) or foil to cover wall spaces near heaters/radiators (2%) and mandatory screen savers and sleep mode on all laptops, tablets & phones (1%).

Sixty per cent of respondents, including heads and managers of sustainability, environment and energy, said that a lack of leadership support, insufficient funding and competing inter-departmental budgets and resources were the biggest challenges preventing organisations from rolling out successful sustainability programmes.

A third of employees questioned said their organisation had acted to improve the sustainability of their procurement processes, but 16% said that engaging with suppliers on reducing emissions is also a major barrier to sustainable progress.

Paul Lewis, former CEO at Carbon Intelligence, commented on the findings: “Our report has shown that staff are engaged and willing to help organisations to be more carbon efficient, but that they aren’t being given the incentives, tools and sometimes the support to do this.

“46% of companies are rightly inviting staff to put forward sustainable ideas but it appears that few are engaging with employees to drive them through. Getting leadership buy in and the budgets to implement these energy saving innovations remains a challenge for many environmental and sustainability professionals.

Paul continued: “For there to be any chance in meeting the IPCC warming recommendations and to make a real dent in the side of climate change then organisations must play their part by having clearly defined environmentally sustainable policies in place that are centred around ambitious emission reduction targets. These targets should be science-based to give an organisation a well-defined pathway to reduce its greenhouse gas emissions in line with the level of decarbonisation required to keep global temperature increase to 2°C or below.

“57% of the employees we interviewed said they don’t trust organisations to always deliver on their sustainability claims. Setting targets not only sends out a clear message on the organisations’ commitment to climate change but reduces energy spend; which benefits the planet, your people, your business reputation, and your bottom line.”

About ‘The Carbon Commitment report’

‘The Carbon Commitment report’ is an independently commissioned research report from energy performance and carbon management experts, Carbon Intelligence. 1,000 heads and managers of sustainability, environment and energy, and facilities managers or business owners / directors and CFOs of companies without a Head of Sustainability / FM, completed the research. Respondents were from large corporations with over 250 employees. 1,000 employees at or below Junior Management level from Companies with 250+ employees also answered further questions.