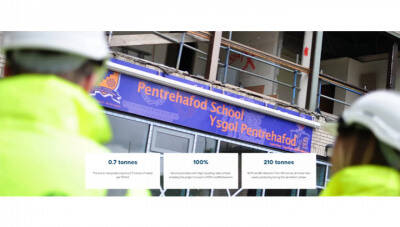 With over 1,000 students, Pentrehafod Comprehensive School in Swansea has been an established part of its local community for over 40 years. Due to many of the school’s buildings having reached the end of their lifespan, in February 2015 The City and County of Swansea Council submitted plans to the Welsh Government outlining significant remodelling and refurbishment works at the school. Following a two-tiered tender process, leading construction and regeneration company, Morgan Sindall, was appointed to manage the project in January 2016.

Costing £15.1m, the plans include; the removal of all demountable units, a two-storey extension to link previously separated buildings, a new car park and main entrance, and upgrades to building fabrics, roofing and windows. The project is set for completion in November 2018. Due to the scale of the renovation works, the project has attracted much attention from within the construction industry. As the industry seeks to move away from its traditional linear model of “make, use, dispose”, there is a growing desire to explore the long-term efficiencies and financial viability of large-scale renovations compared with demolishing pre-existing structures and rebuilding.

As the project’s appointed waste management partner, Reconomy has influenced waste-related decision making from day one. Before any construction work began, a comprehensive Site Waste Management Plan (SWMP) was agreed between Morgan Sindall and Reconomy to maximise material usage and minimise wastage. The decision to renovate rather than rebuild aided the project’s waste minimisation goals from the outset, allowing each school building to be evaluated during the planning phase. For example, a 2012 extension to one building was assessed as being in excellent condition, meaning it will require only minor cosmetic updates later in the project, creating virtually no waste.

With construction now underway, and with the wider industry watching on, Morgan Sindall and Reconomy have received added collaborative input from Constructing Excellence in Wales. The government-funded organisation, which runs an initiative called “Enabling Zero Waste”, has provided an additional focus on circular economy principles by encouraging construction methods that readily consider future reuse and recycling. As examples of this thinking, a transparent ceiling system is being installed at the school to allow for materials stored above, such as cabling, to remain identifiable, making it easier to recycle when the time comes. Vinyl flooring that requires no adhesive is also being used, allowing for more straightforward recycling. The project has received further support from David Cheshire, author of Building Revolutions: Applying the Circular Economy to the Built Environment, who has repeatedly visited the site and met with designers to again reinforce circular economy thinking.

To achieve the highest possible landfill diversion percentage, Reconomy has recommended the segregation of as many on-site waste streams as possible. It has also carefully selected each service provider used on the project, with only those maintaining an exceptionally high recycling rate – typically 99% or more – being considered. A range of initiatives have also been established to eliminate waste altogether. For example, all ‘brick and block’ waste created during the project’s demolition phase was crushed, processed and resupplied to the school for use as aggregate in the new car park. Over 600 windows and doors have also been separated into metal and glass by site personal to make them easier to recycle. Elsewhere, internal wooden doors are being recycled for use on other projects, while packaging takeback schemes have been agreed with many suppliers to reduce light mixed waste.

As of September 2017, Pentrehafod Comprehensive School is proudly maintaining a 100% landfill diversion rate. This includes the reuse and recycling of over 210 tonnes of mixed inert waste produced during the demolition phase and over 100 tonnes of waste produced to date during the build phase, including timber, metals and light mixed waste. The site is currently producing only 0.7 tonnes of waste per 100m2, equal to BREEAM ‘exemplary’ standard.