Plans to create a new urban sky park for Manchester to bring more green space and nature to the Castlefield area of the city are a step closer to reality with work now underway. 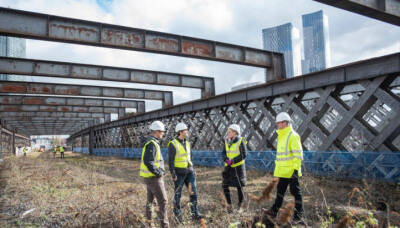 Plans to create a new urban sky park for Manchester to bring more green space and nature to the Castlefield area of the city are a step closer to reality with work about to get underway.

Due to open in July, the National Trust is aiming to turn the imposing 330 metre steel viaduct built in 1892 into a temporary park in the sky and create a meeting place to benefit people and nature that celebrates the industrial heritage of Castlefield.

Originally built to carry heavy rail traffic in and out of the Great Northern Warehouse, the station closed in 1969. Since then, it has stood unused with National Highways undertaking essential repairs and regular maintenance to keep it safe.

The pilot phase of this project will see a green space created to stretch halfway across the elevation of the viaduct. Trees, flowers, and shrubs will be planted to soften the hulking, grey steel work of the industrial structure to help attract wildlife.

Made possible thanks to working in collaboration with National Highways Historical Railways Estate Team, supported by Manchester City Council, Greater Manchester Combined Authority, Transport for Greater Manchester, the local community, businesses, and supporters the project will be open for 12 months.

During this time visitors will have the opportunity to not only explore part of the structure, but to find out more about the viaduct’s heritage, the city’s long relationship with plants and trees and can learn some urban gardening tips.

A section of the viaduct will be left untouched to provide a sense of how nature has reclaimed the space since the site was closed to the late 1960s. It will also have several new features including installations, a community space to hold events and other native planting.

The charity also aims to capture visitors’ opinions when they visit to help determine the longer-term future of the Grade II listed structure.

Hilary McGrady, Director-General of the National Trust says: “This is a hugely significant moment in our plans for creating a unique green space to benefit the surrounding community and to bring more nature to people’s doorsteps. The project is also a fantastic way to celebrate our industrial heritage, bringing it to life for the 21st Century.

“The pandemic showed us the importance of our local parks and gardens, but it also highlighted significant inequalities in access to green space in urban areas like Manchester.

“By working with others, we aim to increase access to parks and green spaces in, around, and near urban areas, so eventually everyone is in easy reach of quiet places for reflection with wide open skies.

“We hope that ‘greening’ the viaduct will become a stepping-stone to other Manchester green spaces and nearby attractions, adding to the city’s vibrant, cultural offer.”

Costing £1.8 million, the pilot has been made possible thanks to funding raised by players of People’s Postcode Lottery, as well as public donations which will cover two-thirds of the build costs.

Read more about this story via Greener Greater Manchester