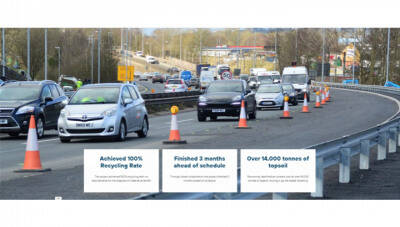 In February 2019, work began to widen a section of the A500 between the A5271 (Porthill) and A527 (Wolstanton) junctions around Stoke-on-Trent. This was a Highways England project to reduce congestion along a section of road which was suffering from long delays, closely spaced junctions and a high number of collisions due to irregular traffic merges.

In addition to widening both carriageways from two to three lanes, the project would also see the installation of new drainage, safety fencing, signs and lighting. A new shared pedestrian and cycle path beside the northbound carriageway was also included in the construction plans. The contract was awarded to leading construction and solutions provider, Osborne, part of the Geoffrey Osborne Group.

The waste management contract was ultimately awarded to Reconomy thanks to a combination of competitive pricing and innovative thinking. Visual inspection of the project area identified a large verge that needed clearing to make way for the extended carriageway, which was partially covered in high-quality topsoil. Reconomy quickly identified the potential for the topsoil to be utilised elsewhere, thereby moving it up the waste hierarchy. Using our extensive supplier network, Reconomy investigated all avenues for the topsoil that would reduce disposal costs for Osborne and provide an onward reuse option. During these investigations Reconomy identified a landfill site that was closing to any new waste disposal and therefore in need of topsoil to act as a capping material. Not only did this lessen the overall environmental impact of the A500 project it also reduced muckaway disposal costs for this waste by 27%.

The removal of all 14,120 tonnes of topsoil was achieved as part of the project’s initial phase. Once completed, the remainder of the excavation work began at pace, involving the full removal of the roadside verge to allow for the carriageway widening. With no hazardous waste identified at the site, all remaining material could be removed as inert waste. A total of 14,380 tonnes was collected and sent for recycling as part of this process. In addition to the muckaway element of the project, Reconomy also set up a waste compound and established segregation procedures for various other types of construction waste including wood, brick and block, general waste, plastics and hazardous waste. Approximately 20 tonnes of these materials were collected during the project, and with the exception of any waste mandated to go to landfill, 100% diversion was achieved.

The A500 carriageway widening project has been the largest muckaway job contracted to Reconomy by Osborne. Not only has it demonstrated Reconomy’s levels of efficiency, it has also underlined our commitment to delivering cost savings that provide additional environmental and sustainability-led benefits. No other company that tendered for the waste management contract on this project was able to offer this. In total, Reconomy managed the removal of 29,636 tonnes of waste, achieving 100% reuse or recycling, with no requirements for the disposal of waste at landfill. By thinking innovatively and utilising methods beyond standard disposal routes, Reconomy was able to deliver a considerable cost saving for Osborne whilst also helping to fulfil the project’s sustainability ambitions.