Reconomy minimised the amount of waste sent to landfill by Travelodge whilst providing the British Heart Foundation (BHF) with an invaluable additional revenue stream worth up to £160,000, contributing vital funds towards life-saving heart disease research. 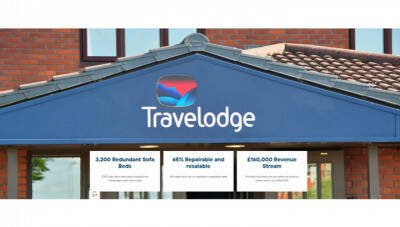 When hotel chain, Travelodge, unveiled plans for a major upgrade of guest room interiors within many of its hotels throughout the UK, a total of 3,200 sofa beds were identified as requiring disposal. Though many were still in a usable condition, they were deemed to be surplus to requirements given the overhaul of the Travelodge brand. Reconomy was appointed to oversee the disposal of the sofas as part of its contract with Travelodge, which involved the management of all textiles and furniture waste generated during the upgrade process. Though recycling the sofas was initially considered, this option was rejected for being cost-prohibitive. Under normal circumstances this decision would have resulted in them all being sent to landfill.

Though many traditional waste management companies will dispose of a client’s redundant assets, no questions asked, Reconomy sought a more forward-thinking solution. Eager to find an environmentally friendly outcome, Reconomy decided to try and find a way to reuse the sofa beds. In support of circular economy principles, the objective was to find an outlet for the sofas that would allow them to retain an inherent value within the wider marketplace, thereby extending their lifespan. To achieve this, a cross-sector approach was needed that would seek to forge mutually beneficial working relationships between organisations from entirely unrelated sectors.

Following initial discussions with the Furniture Reuse Network, a direct partnership was established between Reconomy, Travelodge and the British Heart Foundation (BHF). Having assessed the quality of several sample sofa beds, the charity was confident that they could be sold in their Furniture and Electrical high street stores. An agreement was made for Travelodge to donate all 3,200 sofas to the British Heart Foundation, subject to individual quality checks. To coordinate this process, Reconomy arranged for all the sofas to be collected from Travelodge hotels across the UK and directly shipped to nearby BHF Furniture and Electrical stores.

Upon arrival each sofa bed was subjected to a thorough inspection. All those that met the required standard and retained their fire-resistant health and safety sticker were taken into stock. Those with minimal damage were also retained by BHF so they could be reworked using materials from other damaged sofas to bring them up to the required resale standard. The remaining sofa beds that could not be resold or reworked were rejected and ultimately sent to landfill.

Though the partnership did not provide any direct cost benefits to Travelodge, as the cost of supply to BHF was comparable to other methods of direct disposal, the environmental benefits were considerable. It also enabled Travelodge to meet its own Corporate Social Responsibility (CSR) and sustainability objectives. Of the 3,200 sofa beds supplied to BHF, approximately 65% were deemed suitable for resale following inspection or reworking. This successfully minimised the amount of waste sent to landfill by Travelodge. The partnership also provided BHF with an invaluable additional revenue stream worth up to £160,000, contributing vital funds towards life-saving heart disease research.