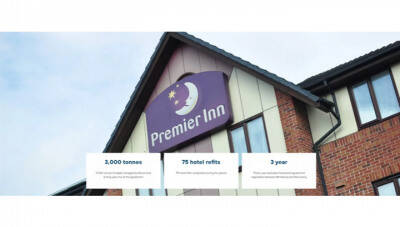 Whitbread PLC is the UK’s largest hospitality company and owns brands such as Costa Coffee, Premier Inn and Beefeater Grill. In March 2016, Whitbread entered an exclusive three-year framework agreement with Reconomy to manage waste produced on-site during a nationwide refurbishment programme of Premier Inn hotels. Running until March 2019 and encompassing over 300 hotels, the programme includes full refits of approximately 44,000 bedrooms and bathrooms, along with corridors and reception areas.

Depending on the size of the hotel, each refurb is scheduled to last between three weeks and five months. These timescales include a week-long mobilisation window, during which all waste management services need to be arranged, requiring a swift response from Reconomy. To speed up this process, a rate card was created by Reconomy at the start of the framework agreement, providing a 12-month fixed cost for all waste services. This has given price stability for Whitbread PLC, allowing for better budgeting, and removed the cost variations frequently experienced within inner-city locations.

A common challenge across many Premier Inn refurbishment sites has been a severe restriction on space, sometimes making it difficult to establish waste segregation compounds. If not correctly managed, this lack of space can result in trades adopting a care-free attitude to waste – a major concern given the volumes of hazardous waste typically generated on refurbishment projects. To overcome this, Reconomy personnel are carrying out regular site visits to deliver toolbox talks on waste management best practices. High visibility signage is also being placed on each site to minimise incorrect segregation and cross-contamination.

Reconomy’s approach to waste management is to base its service offering around the unique circumstances of each site. This methodology has been consistently implemented during each refurbishment to date, producing positive results. During the refurbishment of the Guildford Central hotel, costs were successfully reduced by over £8,000 against forecast by changing the waste service to Reconomy’s ‘optimised refurbishment’ specification. With the site predominantly generating light mixed waste materials, such as packaging, insulation and shrink wrapping, a 20yard roll-on, roll-off (RoRo) was placed on-site to allow for simple disposal. Reconomy then negotiated with its service providers to have the minimum collection tonnage for the RoRo reduced, making it the most cost-effective option for the project.

During the strip-out phase of each refurbishment project, a considerable amount of waste is created containing valuable metals such as iron, steel, brass and copper. With rises in metal theft currently impacting the entire construction industry, both Whitbread and Reconomy were eager to minimise the risk of any site thefts. To manage this, all metals are being separated into their component parts and stored separately to other waste streams, so that a rebate can then be claimed against their value. Regular site reports are also produced containing the expected weight of metal per refurbished room, which was identified at the start of the framework agreement. This allows metal volumes to be audited for each site, should any thefts be suspected.

At the end of the framework agreement’s first year, the refurbishment programme remains on schedule, with 75 hotel refits completed during this period. Independently audited statistics have shown that Reconomy managed over 3,000 tonnes of waste on behalf of Whitbread PLC in 2016, diverting 94.6% away from landfill. To ensure the programme’s performance remains on track, Reconomy is supplying regular reports to Whitbread’s project management team containing all skip and container costs, waste volumes, and the fate of all waste streams – with all opportunities for recycling and reuse being explored. Analysis of this data has enabled an ‘average waste cost per refurbished room’ to be established, which will be used to ensure cost efficiencies and maintain cost control as the project moves into its second year.