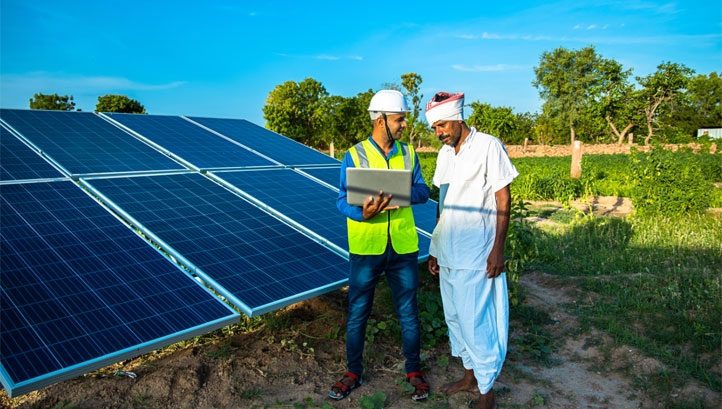 Pictured: Solar panels being installed on a farm in India

Published today (14 July), the ‘Reach for the Sun’ report is co-authored by financial thinktank Carbon Tracker and India’s Council on Energy, Environment and Water (CEEW).

It outlines how emerging markets “have no need to build up huge electricity infrastructure based on fossil fuels”, given that renewables are the cheapest source of new electricity in 90% of the world. As such, many key nations are “leapfrogging” gas as a transition fuel, as well as low-carbon options like nuclear and biomass, in favour of solar and wind. Success stories to date include Chile, Thailand, Turkey and India.

India, which accounts for 9% of emerging market electricity demand and 20% of expected demand growth, now hosts 142W of renewable capacity and is targeting 450GW by 2030. Demand for fossil-fuelled electricity generation reached a plateau in 2018, and fell in 2019 and 2020.

According to the report, the demand for fossil electricity generation has already peaked in nations representing 63% of the total electricity demand from the developing world. China is the largest single outlier.

Nonetheless, the report foresees a “leapfrog” for China in the near future. In 2019, it states, 87% of the growth in electricity supply globally came from non-fossil sources. In China, the proportion was 66%, and the nation’s solar sector is deemed the fastest-growing in the world.

The report does note that developing nations continue to face numerous key barriers to decarbonising their energy mix. Challenges include national policy gaps, under-investment – as recently highlighted by the International Energy Agency (IEA) – and what the report calls the “vested interests of some coal and gas exporters and fragile states”. This is described as the “key impediment to change”.

However, the conclusion is that all barriers are “soluble” and that laggards will soon have too small an influence to stop the global energy transition.

Drivers will include technology improvements, a desire from developing nations to bring electricity access to those without and a desire from developed nations – many of which now have net-zero targets – to align their international financial flows with these commitments.

“Competition between China and the US favours a rapid dissemination of renewable technologies, and capital markets are increasing the cost of fossil capital relative to renewables capital,” the report states. “Expect more global technical, financial and policy support, a key prerequisite of a successful COP26.”

A further driver will be a desire to avoid financial risks and stranded assets – particularly in this era of economic recovery from the Covid-19 pandemic. According to the report, China could face more than $16bn in stranded assets by 2030 if coal plant expansions and new plant builds progress as planned. Europe, it notes, has recorded $150bn in losses due to stranded assets and transition risk crystallising in fossil-fired electricity since 2007.

The publication of the new report comes shortly after the IEA compelled developed nations to do more to scale up investment in renewable energy in developing markets, stating that the transition to net-zero globally was dependent on this.

According to the Agency, annual investments in both clean and fossil-based energies have fallen by one-fifth for developing nations and emerging economies since 2016, on average.

While Covid-19 did dampen investor appetites, the IEA claims, there are other “persistent challenges”, including a lack of supporting policy frameworks. Between 2016 and 2020, these nations accounted for just one-fifth of global energy investment.

These persistent challenges will need to be tackled to align the world with the IEA’s roadmap to a net-zero energy system by mid-century. That roadmap is set to be a key tool for informing negotiations at COP26, taking place in Glasgow this November.