Royal Mail is adding 29 biogas-powered trucks to its fleet in a bid to reduce emissions while saving costs on fuel, while it has been confirmed that the world's largest biofuel station is set to open in Bristol this year. 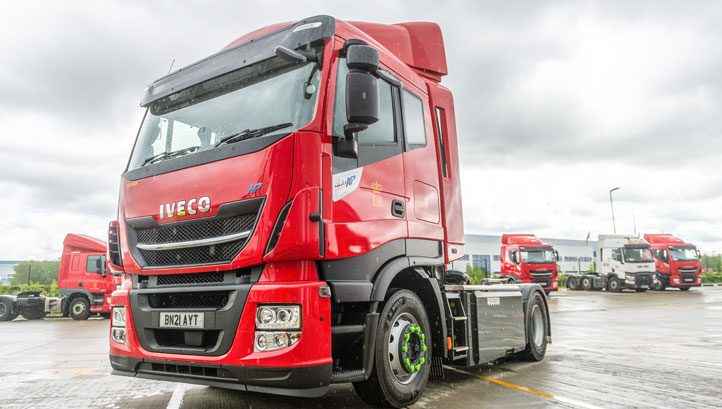 The 40-tonne vehicles can travel up to 400 miles at a time and Royal Mail states the trucks will also be quieter and offer cheaper refueling.

The vehicles will be added to the fleet following trials back in 2017 that saw two trucks added on a permanent basis in 2019. Royal Mail estimated that these two trucks alone have saved the company 107 tonnes of CO2e annually.

HGVs account for 4.2% of UK carbon emissions, meaning that the vehicles will need to be decarbonised if the UK is to meet net-zero emissions by 2050.

Royal Mail’s chief engineer and fleet director James Baker said: “As a Company, we are committed to making changes to our operations that reduce our environmental impact. Bio-CNG is a significantly more cost-effective and lower carbon alternative fuel to diesel for HGVs. These vehicles enable us to deliver large payloads of parcels in the most environmentally-friendly way possible.”

Earlier this year, the company announced plans to install technology systems designed to improve efficiency and reduce emissions across the majority of its fleet. The company has fitted telemetry technology across 11,000 small Royal Mail vans by the end of March. These systems monitor routes taken, braking, turning and acceleration. Such data is then used to produce regular reports on the actions drivers can take to improve efficiency and reduce fuel consumption – which, in turn, reduces emissions.

Royal Mail has already installed telemetry systems across 13,000 large vehicles. The firm attributes this move to 177,000 litres of fuel savings and 459 tonnes of CO2e savings since the start of 2019.

Royal Mail is also a member of The Climate Group’s EV100 initiative, which aims to make electric vehicles (EVs) “the new normal” by 2030. The initiative’s latest annual progress report, published this week, revealed that it now has 101 business members. Collectively, these businesses have rolled out more than 169,000 EVs to date, with 89,000 having been rolled out in 2020 alone.

In related news, CNF Fuels has today (14 May) confirmed that the world’s largest public access biomethane refuelling station for HGVs will open by the end of the year near Bristol.

Construction has begun on the Avonmouth station and once complete will have the capacity to refuel HGVs an hour. It will follow on from the six existing refuelling stations already operational across the UK.

CNG Fuels notes that 100% of the biofuel supplied will be renewable and approved under the Department for Transport’s Renewable Transport Fuel Obligation (RTFO) scheme.

CNG Fuels expects to open a further 14 stations by the end of 2022. The company recently confirmed that Scotland’s first renewable biomethane refuelling station will open this year. The refuelling station is based at the Eurocentral Industrial Estate off the M8.

CNG Fuels claims that the station will be able to serve up to 450 heavy goods vehicles (HGVs) once complete. Biomethane dispensed at the facility will be produced using food waste – a feedstock which CNG Fuels claims results in an 85% reduction in life-cycle greenhouse gas emissions compared to traditional, fossil-based fuels. CNG is also exploring biomethane from manure, which it claims is carbon neutral, and is planning to roll the fuel out from 2022.

CNG Fuels’ chief executive Philip Fjeld said: “Avonmouth is a key site for CNG Fuels’ expansion across the UK. The site will allow companies to use low-carbon fuel for regular routes between London, the Midlands, South Wales, Cornwall and Devon. Such a strategically crucial location requires our biggest refuelling station yet. This station will enable even more fleet operators and hauliers to reduce their carbon emissions and save money.”

Other big businesses planning to scale up the use of biomethane-powered HGVs in the coming years include Asda, Kuehne & Nagel and John Lewis Partnership (JLP). JLP is a long-standing partner of CNG Fuels and is contributing to the development of a biomethane refuelling station in Bracknell, along with Air Liquide.