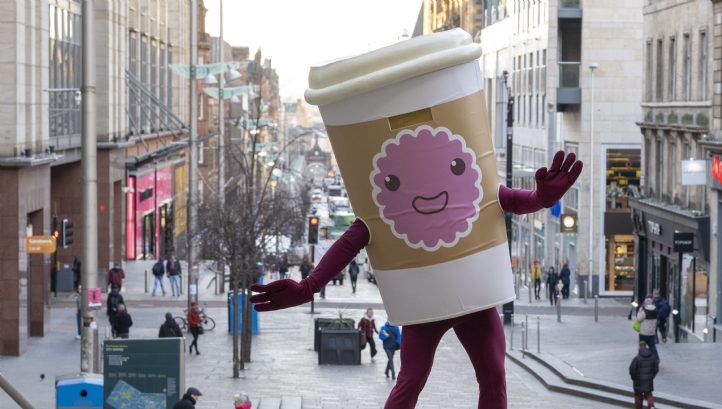 The scheme, which is called the Cup Movement and is being co-run by the Paper Cup Recovery and Recycling Group (PCRRG), will take a two-fold approach in tackling the city’s coffee cup waste problem, lobbying for recycling infrastructure improvements while encouraging the public to change behaviours.

Specifically, Keep Scotland Beautiful will work with retailers, local authorities and other key organisations to install coffee cup collection points across the greater Glasgow area. It will also run an educational communications scheme, aimed at encouraging coffee drinkers to switch to reusable cups, or to recycle their disposable ones.

The PCRRG, meanwhile, will call for waste management firms to improve their recycling infrastructure for paper coffee cups. Such cups are commonly sealed with a plastic lining to make them waterproof. Although both materials are recyclable, the lining cannot be handled by most recycling facilities, while the paper is subjected to contamination issues.

Additionally, PCRRG members such as Costa, Greggs, McDonalds UK, Pret A Manger and Starbucks UK will install cup collection points in their stores and display educational posters about the campaign.

“The Cup Movement in Glasgow is a truly collaborative initiative that has been 18 months in the planning,” Keep Scotland Beautiful’s chief executive Derek Robertson said.

“By bringing together businesses, institutions and people, we will be working hard to reach each and every cup before it becomes litter or landfill. Whether it be through recycling or switching to a reusable cup, we want people to realise they have an opportunity to be part of a positive movement for change.”

The scheme is being jointly funded by Keep Scotland Beautiful, the PCRRG, the Scottish Government and Glasgow City Council. It has additionally received support from recycling organisation Simply Cups, which is working to stimulate the market for recycled coffee cups across the UK and Australia.

A storm in a coffee cup

The launch of The Cup Movement comes after an audit of waste items from Glasgow’s food and drink sector found that almost half (48%) of the city’s drinks waste was accounted for by coffee cups in 2018.

Similarly, the Environmental Audit Committee (EAC) estimates that just one in every 400 coffee cups distributed within the UK is collected for recycling, with more than 500,000 cups littered every day. Indeed, more than 100,000 trees are believed to be logged each year in order to produce single-use coffee cups for use within the UK, with Brits spending £7.9bn annually on takeaway hot drinks.

The Cup Movement’s progress in turning these trends around will be tracked throughout 2019, with Keep Scotland Beautiful and the PCRRE hoping to create a model that can be replicated in other cities across Europe.

Since the EAC’s research into coffee cups was published in 2017, most of the UK’s major coffee outlets have taken moves to reduce the number of disposable cups they distribute.

The likes of Costa, Starbucks UK and Pret A Manger now offer discounts to those using reusable cups, for example, with the latter having doubled its discount to 50p last year. Caffe Nero, meanwhile, incentivises reuse by offering customers two stamps on their loyalty card – compared to the usual one – when they bring their own cup.

As for recycling, Costa and Starbucks have both launched recycling schemes in all stores to ensure that as many as possible of their own takeaway cups – and those from competitors – are recycled. The former is now working to recycle the equivalent of its entire annual sales of takeaway cups – at a financial cost to the business – by 2020.

However, the EAC has warned that retailer action is unlikely to be unified without the launch of a UK-wide ‘latte levy’ on disposable cups. The 25p charge was ruled out by the Chancellor at last year’s Autumn Budget.