The UK Government has outlined plans to stop ships from running their engines or using diesel generators while berthed, replacing this practice with new infrastructure that will connect them to onshore electricity. 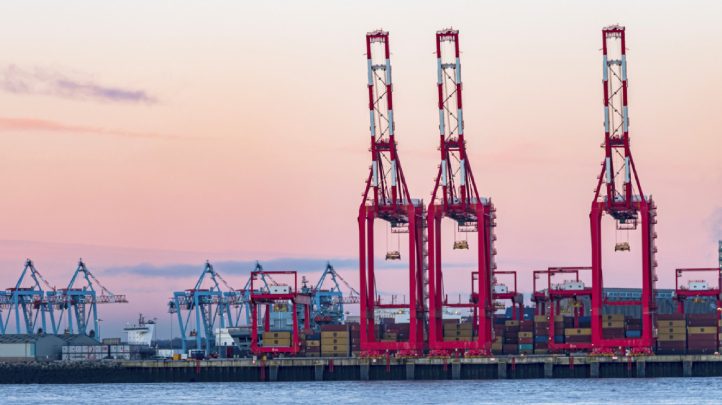 Pictured: Vessels and shipping containers at the Port of Liverpool

During an event at the UK Chamber of Shipping on Monday evening (7 February), Maritime Minister Robert Courts announced a call for evidence on the shift to so-called shore power for vessels needing to power lighting, air conditioning and other processes while they are berthed.

This transition should reduce carbon emissions as well as local noise and air pollution.

The consultation will run until Friday 25 April. The Department for Transport (Dft) is seeking information on the likely emissions reductions that will result from a shift to shore power, as well as data on likely costs and the practicalities of rolling out this infrastructure. With regards to these topics, Courts has admitted that there are currently “gaps in understanding” in the DfT.

While acknowledging the costs, the Government has emphasized that the transition to shore power would create jobs and unlock private investment in coastal regions.

“Shore power has the potential to play a positive part in the future of zero-emission maritime, although it is an area that currently faces some significant challenges,” said the UK Major Ports Group’s chief executive Tim Morris.

“The call for evidence is, therefore, an important step in finding the right, viable ways that industry, government and networks can work together to support the wider deployment of shore power where it is an appropriate solution.”

Last March, the DfT launched the Clean Maritime Demonstration Competition – an initiative aiming to find and fund innovations in the field of zero-emission maritime vessels. Successful applicants were announced last September and collectively allocated £23m from the Government and the private sector. They included hydrogen-fuelled ferries, automation systems for efficiency, ammonia for fuel and shore power trials.

Then, as part of the Transport Decarbonisation Plan, the UK Government pledged to develop emissions targets for the maritime sector beginning in 2030 and to set a net-zero deadline “as early as is feasible”. These targets could come in the Clean Maritime Plan, expected later this year. Transport Secretary Grant Shapps has been pushing for an “absolute zero” target for the sector, to ensure it is decarbonising in a science-based fashion, without over-reliance on offsetting.

Also last year, the UK was one of more than a dozen nations signing a new declaration on the creation of zero-emission shipping routes between ports at COP26. The so-called ‘Clydebank Declaration’ is aiming to establish at least six corridors by the mid-2020s, which are likely to be shorter routes, and to add “many more routes”, including long-haul routes, by 2030.

In related news, the Oil and Gas Climate Initiative (OGCI) has this week published a new report outlining pathways to the delivery of the International Maritime Organisation’s (IMO) long-term target to halve greenhouse gas emissions from the sector by 2050, against a 2008 baseline.

Produced by consultancy Ricardo, the report outlines three technology pathways for delivering this emissions reduction. The first involves at-scale and early-stage uptake of green hydrogen and sustainable ammonia as fuels; the second replaces fossil fuels with biofuels and the third sees ships maximising energy efficiency and using onboard carbon capture to deal with residual emissions.

While the second pathway would not require engine replacements, the study ultimately concludes that it would be the most expensive.

“Unlocking zero-carbon fuel pathways will avoid higher-emission pathways becoming locked in,” said Ricardo’s associate director Tim Scarbrough. “At the same time, the deployment of energy efficiency technologies and operational measures is also vital in the short-term to reduce the consumption of fossil fuels prior to that transition.”

Scarbrough added: “A tightening of the IMO’s decarbonisation targets would help underline the need for these near-term choices.”

The IMO is due to revise its long-term strategy including its emissions targets for the sector in 2023. At the IMO’s meeting in November 2021, members voted in favour of amending measures designed to limit the carbon intensity of ships. While proponents say the measures will make each ship more efficient, the general consensus is that the rule will leave loopholes for the sector as a whole to increase emissions through to 2030.