Starbucks has launched a new scheme whereby customers in London and Geneva can borrow reusable cups for a £1 fee, and is hoping to scale it across thousands of stores. 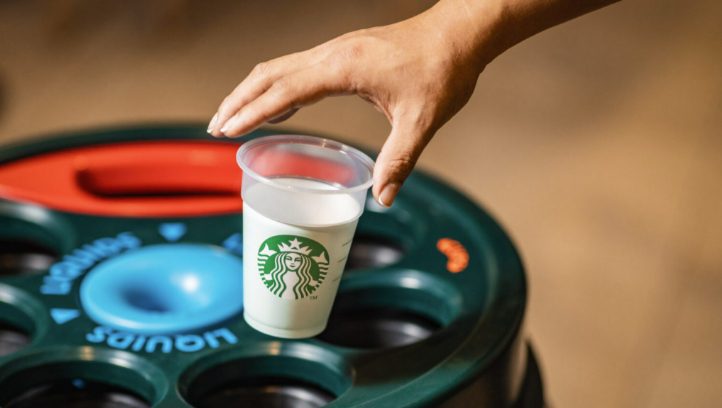 The scheme launched today (21 February) on a trial basis and is being made available at all Starbucks stores in Geneva, plus the Starbucks in London’s Canary Wharf, in the first instance.

It will enable customers to request a reusable cup at the till for a £1 deposit fee, which customers will be reimbursed when the cup is returned to a Starbucks store. This means customers do not need to remember to bring their own reusable cup from home. Starbucks said in a statement that it has formulated the system after work with Hubbub, the environmental charity whose own research found that 36% of UK coffee drinkers don’t use a reusable cup every time they buy a drink on the go because they forget their cups at home.

Each cup has an identifying number, meaning that Starbucks staff can scan them and return the fee to the customer once they are finished.Cups returned will be sanitised in-store ready for reuse.

The trials in Canary Wharf and Geneva will last for two months. Their launch comes after a similar system was trialled at Gatwick Airport’s South Terminal in 2019 but was ultimately halted due to the Covid-19 pandemic.

Starbucks’ overarching target to reduce cup waste in the Europe, Middle East and Africa (EMEA) region is to ensure that all stores have implemented a reusable solution – beyond just enabling customers to bring their own cups – by 2025. The coffee chain operates more than 4,000 stores across the region. This target was first announced last summer.

Globally, Starbucks is aiming to halve waste by 2030 against a 2019 baseline.

Commenting on the launch of the trial, Starbucks’ corporate social impact and sustainability specialist for the EMEA region, Luke Ervine, posted on LinkedIn: “When I first joined Starbucks EMEA, I did so with one ambition; I wanted to make using reusable cups easier for our customers without putting too much burden on our store Partners in an effort to encourage reuse.

“This morning, I am immensely proud of the returnable cup project team and particularly Gemma Coate who has worked so hard to make this a possibility.”

Coate is also a corporate social impact and sustainability for Starbucks, based in the EMEA region.

Other food-to-go brands updating their approach to reusable cups post-lockdown include McDonald’s UK, which will shortly be launching a cup reuse scheme with TerraCycle’s Loop platform, and JustEat, which is working with reusable packaging service CLUBZERO to trial a reuse system in partnership with six of its partner restaurants in London.

Elsewhere, The Coca-Cola Company this month pledged to ensure that 25% of its drinks are sold in refillable or returnable packaging by 2030, following shareholder proposals filed by green groups.