The UN plastics treaty: Everything you need to know

The UN has today (2 March) concluded its latest Environment Assembly conference in Nairobi, with the agreement of terms for a global treaty to stop plastic pollution making headlines. Here, edie rounds up what - precisely - the treaty entails. 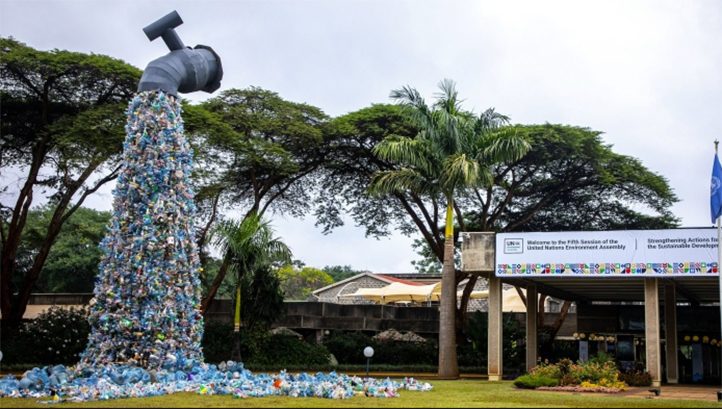 The fifth UN Environment Assembly, known as UNEA 5.2, began in Nairobi late last week and has concluded today. A key focus area for attendees has been the development of broad terms for a global agreement to slow and ultimately halt plastic pollution and the formation of an intergovernmental negotiating committee (INC) to finalise the treaty.

Two main resolutions had been put forward ahead of the meeting. One, supported by more than 70 nations, including 27 EU member states, included a requirement to reduce plastic production. The other, tabled by Japan and supported by the likes of the US, China, Sri Lanka, Cambodia and Palau, did not include this requirement, placing instead a greater focus on scaling recycling and energy-from-waste.

More than 90 businesses – including some of the world’s largest plastic packaging producers like Coca Cola and PepsiCo– as well as 300 scientists, had been urging UN delegates to back the former resolution and to “accept nothing less” than a strong requirement to curb plastic pollution at the very start of the value chain.

Ultimately, attendees from 175 nations agreed on a text which covers the full lifecycle of plastic, from production to waste management. It also covers plastics of all types and sizes, from large pieces of abandoned fishing gear, to nurdles and microplastics.

The UN Environment Programme’s (UNEP) director Inger Anderson has stated that the final treaty could be the most important multilateral pact for the environment, globally, since the Paris Agreement was ratified in 2015, committing the world to work towards temperature pathways of 2C and – if possible – 1.5C.

Here, edie answers some FAQ about the treaty, including why it was created, when it will be finalised and what it will mean for governments and businesses.

What is the global state of play regarding plastic pollution?

An often-quoted statistic from the Ellen MacArthur Foundation is the fact that, by 2050, there will be more plastics than fish in the sea if more action to tackle the crisis is not taken.

Similarly, WWF is expecting a quadrupling in ocean plastic pollution by 2050, against 2020 levels. WWF has also predicted that the amount of plastics produced, littered and incinerated globally will increase “dramatically” this decade – and that, in this timeframe, lifecycle emissions from plastics will increase by 50%. Another prediction from the NGO is that the annual societal cost of plastic produced will surpass $7.1trn in 2040.

So, the picture is bleak in terms of waste, ecosystems, human health, ecology and the economy.

Perhaps one of the most in-depth stocktakes of the global plastic challenge was published last month by the OECD. The OECD’s Global Plastics Outlook revealed that global plastics production levels have doubled between 2000 and 2019, with 2019 levels of production standing at 460 million tonnes.

Should current waste management trends continue, we can expect just 9% of this plastic to be recycled. 50% will be sent to landfill, around 20% will be incinerated and the majority of the remainder likely ending up as pollution.

The OECD has emphasised that the main contributors to the problem are not applications in which plastics remain in use for many years, like in furniture and building materials. Instead, two-thirds of plastic waste is accounted for by products used for five years or less. Key culprits include packaging, textiles and consumer products.

What parts of the plastic lifecycle are covered by the treaty?

Environmental and human rights groups had been concerned that attendees might ultimately opt for a treaty that would not require nations to act on the production side of the plastics lifecycle. This did not come to pass. The UNEA has stated that all nations will need to act on all parts of the plastics lifecycle, including design, production, manufacturing, logistics, use, reuse and end-of-life management.

There are not, at present, targets to cap or reduce plastic production on a global scale. Indeed, time-bound numerical targets of any nature are not in the text at this stage.

There is a recognition that all products and materials should be able to be “reused, remanufactured or recycled and therefore retained in the economy for as long as possible”.

However, the final text emphasises the fact that, ultimately, each nation will be able to make its own decisions based on the local context. Every UN member state will be asked to develop national action plans, but the text recognises that each plan will depend, to a different extent, on measures to reduce production and measures to improve waste management.

When can we expect the final treaty?

The UN is aiming to complete a finalised treaty by 2024. The UNEP’s secretary-general Inger Anderson has stated that the organisation is “not granting any stakeholder a two-year pause” and that it expects to convene an intergovernmental negotiating committee for the first time in the second half of 2022. She has also stated that UN member states should “continue and step up” voluntary work to reduce plastic pollution.

When the final treaty comes, we can expect specific targets; requirements for nations to report; measures for national and local government collaborations; measures for engaging the private sector and targets for scaling finance.

Committee members have been urged to make these decisions on the “best available science” and with input from the most-affected communities.

Is the treaty legally binding?

As mentioned, the treaty is not finalised at this stage, with UN officials foreseeing at least another 18 months of work.

Once it is finalised, certain provisions may be legally binding, but this is up to the UN to decide, following discussions with nations. The Paris Agreement, after which the plastics treaty is modelled, does contain certain legally binding parts. For example, nations committed to Paris must produce Nationally Determined Contributions and update them as required. However, other requirements are more flexible.

It may be the case that once the treaty is completed, some national governments implement laws to keep their nations aligned with the treaty which are binding. This has been the case with the UK’s 2050 net-zero climate target, for example.

The UNEA has stated that its intention is to work towards a treaty that is legally binding.

An increasing number of developed nations have begun backing efforts to reduce plastic production at the source in recent years, due to repeated warnings that recycling rates are stagnating; ever-more plastic spills; pressure from citizens and better scientific research on the impacts of plastic on human and ecosystem health.

With the net-zero movement now covering more than 80% of GDP, there has also been an improvement in scientific research into the emissions impact of the plastics lifecycle. And many nations with net-zero targets, including the UK and EU member states, also have long-term commitments to end the sale and distribution of single-use plastics.

However, major plastic-producing nations have proven keen to defend the sector, plumping for the resolution which did not include a requirement to cap plastic production. A combination of industry lobbying and the need to deliver an economic recovery from Covid-19 are two major pressures here.

Japan, which tabled the resolution without a cap on production, has sought to scale up its recycling capacity in recent years, after China banned the import of most used plastics in 2017. For domestic recycling rates, the country boasts an impressive 85%, and its national government continues to frame recycling as a growth industry.

In short – some of the countries with the most to lose in the short-term from reduced plastic production, or the most to gain from the plastic recycling sector’s expansion, have stood against capping production.

How have businesses and trade bodies attempted to intervene?

More than 70 of the world’s largest plastic packaging manufacturers and users signed an open letter in January, calling on negotiators at the UNEA to adopt a strong agreement that covered the whole lifecycle of plastics and set specific targets for reducing production.

By the end of February, the number of signatories had surpassed 90.

Nonetheless, not all businesses and trade bodies have been so progressive. The American Chemistry Council industry group, which represents more than 190 member businesses, reportedly pushed back against the inclusion of measures to reduce plastic production globally. Member businesses include 3M, Dow, DuPont, Honeywell and the American chemical arms of energy managers TotalEnergies, Chevron, ExxonMobil. This pressure clearly proved at least somewhat successful in influencing the US’s delegation at the UNEA.

According to Reuters, trade body Plastics Europe had also been pushing for the weaker of the two agreements. Plastics Europe members include Borealis, BASF, Braskem and Ineos.

Anderson commented: “The scope of industry and private sector entities involved in this topic are vast, with wide business interests. While positions are varied, a general recognition is growing for the need for global, collective actions. Across the board, industries contributing to plastic pollution need to do better, and we are seeing evidence that this is happening – however, it is not happening fast enough to reverse or halt the plastics pollution crisis.

“UNEP has been having discussions with different stakeholders to understand their priorities, challenges, and what would be needed to foster a new plastics circular economy that works for industry, for the economy and meets environmental and social objectives.”

What has the reaction to the treaty been like?

Click here to read edie’s roundup of reactions to the announcement.