Time, innovation and partnerships: How Unilever is moving away from single-use plastics

EXCLUSIVE: Unilever's chief R&D officer Richard Slater tells edie how a focus on better, less and no plastic is enabling the consumer goods giant to reduce its plastics footprint globally while improving the recyclability of packaging. 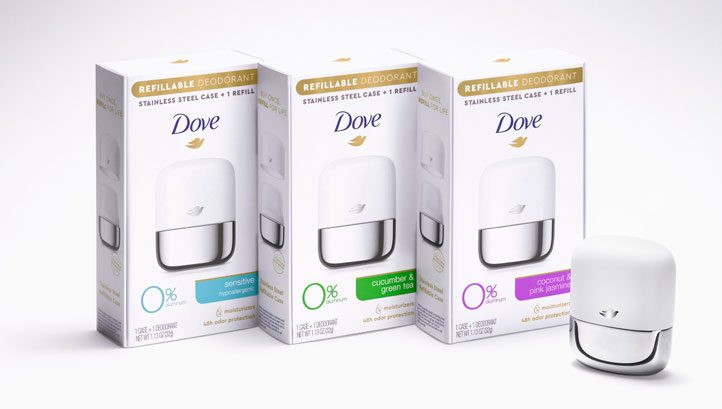 In 2019, Unilever, which owns iconic brands such as Dove, Cif and Magnum, set a target to halve its use of virgin plastic by 2025 by reducing plastic packaging by more than 100,000 tonnes, increasing the amount of recycled plastics it uses and collecting and processing more plastic packaging than it sells.

While corporate efforts to reduce plastics are now commonplace, Unilever’s targets will span multiple countries, all of which have unique regulations and infrastructure regarding the disposal and collection of plastics packaging.

Speaking exclusively to edie, Unilever’s head of R&D Richard Slater claims that a multi-pronged approach on “less plastic, better, and no plastic” is helping to drive innovation that is rethinking business models while accounting for consumer demands.

“It’s right that [citizens] have a sense of urgency to deal with plastic pollution and we feel that as well,” Slater says. “Doing the big things that will really make a difference at scale takes innovation, time and getting consumers used to new ways and models. But that shouldn’t mean with have any less sense of urgency to go after these projects.

“We should be, and are, getting into pilot mode very fast and learning from what we do to be able to apply change at scale. There is a balance, of course, but we’ve got to get on with this urgently.”

Slater hints at a balancing act that all corporates must face when attempting to phase out single-use plastics. New research commissioned this week by WWF has found that there has been a recorded 71% increase in search for “sustainable” consumer goods over the last four years, with many shoppers looking for items that benefit the planet and packaging that is easily recyclable.

But while consumer demand for sustainable goods grows at breakneck speed, corporate efforts to innovate packaging require detailed planning and time to ensure replacement materials and alternative business models don’t lead to unintended consequences that either create more waste or lead to a rise in carbon emissions.

“Sustainability is interwoven,” Slater adds, “We have to look carefully at the lifecycle analysis. We’re not going to move from plastics to another material if it’s net-worse from an overall environmental point of view.

“We have to make sure the overall lifecycle analysis makes sense and while we recognise the need to reduce, plastics does have its place, but we need to keep it out of the waste stream and ensure it is recyclable and recycled.”

Items badged as compostable or biodegradable can often be misleading and Slater notes that it is the duty of businesses to ensure the packaging they place into markets can be handled by the relevant waste authorities.

This week, for example, Unilever revealed that it is introducing recyclable toothpaste tubes across two of its biggest markets, France and India. As part of a four-year innovation process for the development of the tubes, Unilever worked with packaging manufacturers including EPL, Amcor, Huhtamaki and Dai Nippon Indonesia (DNPI) and global recycling organisations to ensure the value chain was aligned in the creation, collection and recycling processing of the product.

Unilever is making tubes from High-Density Polyethylene (HDPE), which is one of the most widely recyclable plastics globally. It is also lightweighting the plastic, making it the thinnest plastic used in toothpaste production, to reduce the volumes required for production. Post-consumer recycled plastic (PCR) will also be incorporated into products at a later date.

More broadly, Unilever has increased its use of PCR to around 75,000 tonnes, which accounts for 10% of the company’s total plastic footprint. Unilever is aiming to use at least 25% PCR by 2025 and expects to double the amount it uses over the next 12 months.

Unilever has also trialled new innovations and packaging in an attempt to progress against its targets. The firm’s Magnum brand introduced plastic tubs consisting of recycled plastic across all its markets, a move that saw an estimated 160,000kg of certified recycled material used by the end of 2020 across Europe.

The company is also part of a joint project hoping to scale up chemical recycling for hard-to-recycle plastics waste, involving synthetic fuel giant Neste, which has received a £3.1m grant from UK Research and Innovation (UKRI). Unilever will also use the findings of the joint project to inform the ways in which it is redesigning its plastics packaging in line with its sustainability targets.

These innovations all slot into various parts of Unilever’s strategic approach to plastics.

Unilever’s broader Five Point Plastics Plan’, launched as a follow up to its previous three-pronged approach, is centred around reducing plastic; switching to recyclable materials and recycled content; seeking alternatives to plastics and working in collaboration with partners across the value chain.

The five-point plan aims to increase the amount of recycled content used in packaging, reduce the company’s plastics footprint, seek alternatives to plastic, work collaboratively with partners and support behaviour change amongst consumers and employees.

Slater notes that consumer behaviours can often be the hardest part of any new trial or pilot aimed at reducing plastics waste.

Sachets, for example, are a prime example of the plastics conundrum. They enable low-income consumers to purchase smaller amounts of a product they otherwise would be unable to afford. However, recycling infrastructure in developing countries – where a lot of these consumers are often based – is largely ill-equipped to collect and treat the packaging.

As well as considering these quality-of-life implications, Slater notes that any resource efficiency innovation has to have a “value perception” for the consumer so that cost and ease of use aren’t traded-off for sustainability.

“We had to learn about creating a value perception for the people you’re serving and to make them comfortable buying new products that work in slightly different ways,” Slater says, alluding to reuse and refill models rolled out in the likes of the US through the Dove refillable deodorant.

“People rightly don’t want to compromise on the performance and the value of what they’re using. Our innovation challenge is taking sustainability and making it into something that is easy for people to use and love.”

An example of this value perception can be found in Brazil with Unilever’s OMO laundry detergent brand. A new dilute-at-home laundry detergent has been introduced that can be poured into a standard 3-litre OMO bottle to dilute with water at home. As well as containing 72% plastic, the new innovation saves consumers 20-25% of costs per wash. To date, Unilever has shifted one-third of its Brazilian consumer base to the refill format.

Despite the plethora of packaging solutions rolled out across numerous brands, Unilever – and others – realise that reaching its target will require more disruption and sector-wide change.

Last summer, a survey of 50 of the largest consumer-facing goods firms, including Unilever, PepsiCo, Kraft Heinz and Kellogg, has found that companies are generally failing to take ambitious action on plastic pollution, despite lofty pledges to do so.

Unilever received the highest overall grade of the cohort. Nonetheless, As You Sow said it would not describe Unilever as a “leadership company”.

Slater argues that leadership won’t be confined to single companies, but rather a sector-wide shift to sustainable products and services. Unilever has just started trialling new technology to create the first paper-based bottle, for example, as part of the Pulpex consortium with Diageo, PepsiCo, GSK and BP.

“The more people and brands that commit to this movement the better,” Slate added. “It’s about fantastic products that are needed every day being moved across to a sustainable future. This is where partnerships, including those that are cross-industry, will be needed.

“By default, we want to share innovation that helps move the whole industry across.”