With less than two months to go until COP26, the UK and Indian governments have agreed upon a new $1.2bn (£900,000) package of funding designed to accelerate the low-carbon transition. 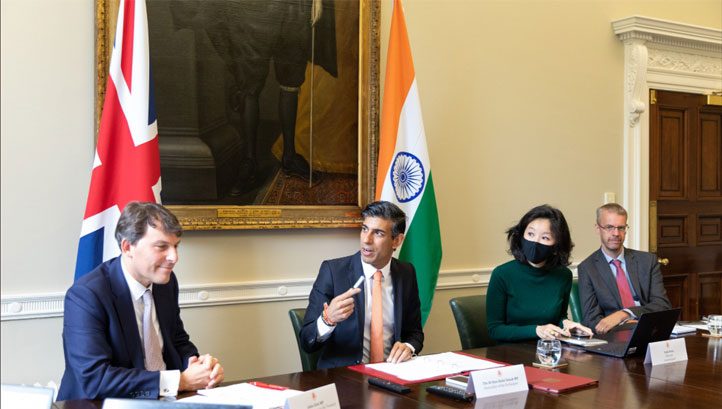 The package was agreed upon today (2 September) at the 11th Economic and Financial Dialogue between the two nations, hosted over video call and attended by UK Chancellor Rishi Sunak and Indian finance minister Nirmala Sitharaman.

Called the Climate Finance Leadership Initiative (CFLI) India partnership, the package consists of both public funding from the two national governments, and commitments to mobilise investment from the private sector. $1bn will come from the UK’s development finance institution, CDC Group, and will be allocated across the fields of low-carbon energy, infrastructure and technologies.

The remaining $200m will come from private and multilateral investment into a Green Growth Equity Fund which invests in India’s renewable energy sector. India notably has an ambitious target to host 175GW of renewable electricity generation by 2022, up from 94.5GW as of February 2021.

The timeline for raising and allocating the $1.2bn has not yet been confirmed. However, the UK Government has stated that the CFLI India partnership will build on the existing CFLI group, which convenes financial organisations with more than $6.2trn of assets under management collectively. Michael Bloomberg, the UN’s Special Envoy on Climate Ambition and Solutions, leads the existing CFLI.

“The UK and India already have strong ties, and today we’ve made important new agreements to boost our relationship and deliver for both our countries,” Sunak said.

“Supporting India’s green growth is a shared priority so I’m pleased that we’ve announced a $1.2bn investment package, and launched the new CFLI India partnership, to boost investment in sustainable projects in India as the UK gears up to host COP26.”

The launch of the investment package follows on from a visit to India by COP26 President Alok Sharma last month.

It also comes after the G7 nations reaffirmed a past commitment – which has not yet been fulfilled – to provide at least $100bn of climate finance to poorer nations each year. These nations are now facing growing pressure to ensure that the talks in Glasgow this November resolve with more information about how and when this finance will be raised and allocated. The UK is under particular scrutiny, after MPs voted to prolong a cut to the overseas development aid budget – from 0.7% to 0.5% of gross national income – intended to be temporary during Covid-19.

As well as COP26, a UK-India trade deal is on the near horizon, with negotiations due to begin before the end of the year. Sunak and Sitharaman stated during today’s meeting that they would be “ambitious” when considering services when negotiating. Services account for 71% of UK GDP and 54% of GDP in India. The UK-India 2030 Roadmap, published earlier this summer, targets a doubling in trade between the two nations this decade.