UK and New Zealand tout environmental credentials of new trade deal, but not everyone is impressed

The UK and New Zealand have signed their post-Brexit trade deal, which is the first in New Zealand's history with a specific article on climate change. 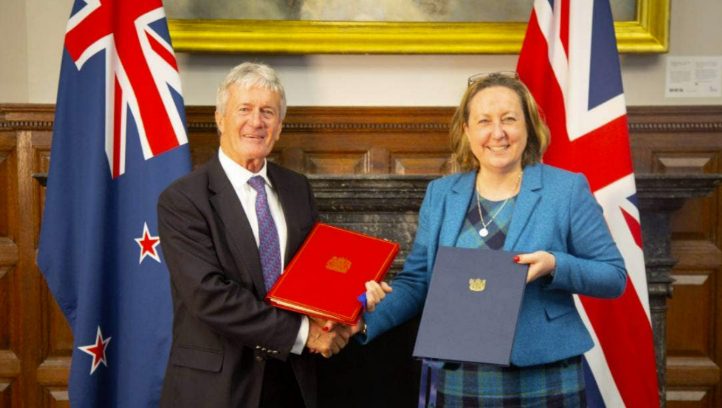 The UK’s Department for International Trade confirmed the signing of the deal late on Monday (28 February), following a meeting between the UK’s International Trade Secretary Anne-Marie Trevelyan and New Zealand Minister for Trade and Export Growth Damien O’Connor. The basic principles of the deal were agreed upon last October.

The UK is touting a 60% increase in bilateral trade and an economic boost of £800m for the British economy within ten years. Critics, however, have said benefits are likely to be far smaller and, ultimately, “economically marginal”.

In environmental terms, the Department for International Trade has called the agreement “one of its greenest ever”, as it specifically mentions commitments to the Paris Agreement and to 2050 net-zero targets from the UK and New Zealand.

Both nations have stated that they intend to boost trade and investment in low-carbon services and cleantech under the deal, including electric vehicle and wind turbine parts. Also reiterated are commitments made at COP26 to phase out ‘inefficient subsidies’ for all fossil fuels.

From New Zealand’s standpoint specifically, the agreement also includes a commitment to creating a platform for cooperation on issues important to the Māori. The importance of indigenous peoples in environmental conservation was also a key discussion point at COP26, particularly in the new Glasgow Leaders’ Declaration on Forests and Land Use.

However, not all green groups and trade bodies are satisfied with the FTA’s environmental provisions. WWF’s executive director of advocacy and campaigns Katie White said: “Despite efforts to consider environmental impact, the UK New Zealand trade deal agreed today follows the same blueprint as the UK-Australia deal in lowering tariffs to zero in key agricultural sectors.

“This opens the door to food produced in ways that harm nature and fuel the climate crisis, undermining the UK’s own transition to more sustainable farming.”

“The Government is now asking British farmers to go toe-to-toe with some of the most export-oriented farmers in the world, without the serious, long-term and properly funded investment in UK agriculture that can enable us to do so; the sort of strategic investment in farming and exports that the New Zealand government has made in recent decades.”

WWF has long been calling – as many other trade bodies, green groups and even MPs have – for the UK Government to adopt a set of core standards on the environment to be used in all FTAs. It argues that this is particularly important given that much of the UK’s overall environmental footprint is generated overseas. Moreover, the UK has committed to net-zero by 2050, with interim carbon budgets, and has also supported the UN’s commitment for nations to safeguard at least 30% of habitats by size by 2030.

Writing to MPs on the Environmental Audit Committee last month, the Department for International Trade promised that environmental sustainability will become a “key” factor in the development of future FTAs. edie has reached out to the Department to ask whether the measures detailed in that response will have applied to the UK-New Zealand deal.

“Our deal with New Zealand is one of our greenest yet, containing a substantive environment chapter and confirming commitments to the Paris agreement and net-zero that have been welcomed by the Chair of the Environment Audit Committee.

“Our independently scrutinised impact assessment estimates that overall greenhouse gas emissions associated with UK-based production will be largely unchanged from the agreement.”