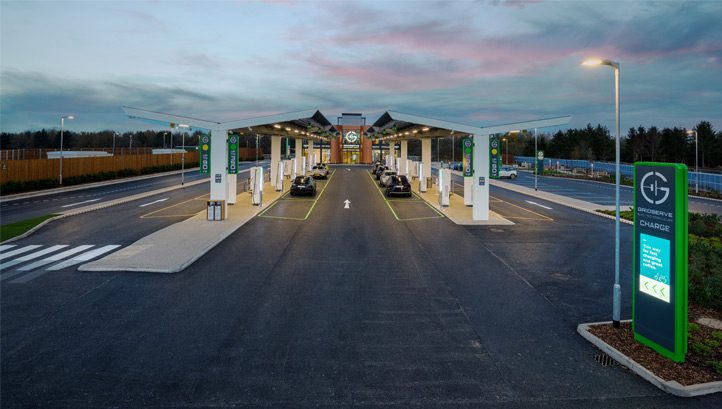 Developer Gridserve announced today (7 December) that the facility, near Braintree, is now open for business, following Covid-19 related delays. It was originally slated for opening this summer, with the date later pushed to November-December in light of lockdown restrictions.

Retailers including WHSmith, Costa Coffee, Booths and the Post Office have opened new stores at the forecourt, which has the ability to charge up to 36 EVs at once.

Gridserve claims that its chargers are “among the fastest available commercially in the UK”, with speeds of up to 350kW. Some pure EV models can add up to 200 miles of range in 20 minutes using this setting.  Drivers will be charged 24p per kWh of energy.

Aside from the retail partners, Gridserve has worked with Hitachi Capital, Innovate UK and the Government’s Office for Zero-Emission Vehicles (OZEV) to finance the facility. It also has a partnership with energy developer Anesco and the National Grid to source 100% renewable electricity from the Clay Hill solar farm in Bedfordshire. The solar farm, slated as the UK’s first subsidy-free array of its kind, consists of 0MW of solar PV and 6MW of energy storage.

Gridserve unveiled a £1bn programme in March 2019 to construct more than 100 “Electric Forecourts” across the UK. It believes it can deliver on this vision by 2026 and Hitachi Capital is providing support for the broader rollout.

The firm’s founder and chief executive Toddington Harper said his motivation for the project is to make EV charging  “simple and free of anxiety” and “less expensive than a petrol and diesel alternative”. To the latter point, the average EV can receive an 80% charge for less than £10.

The announcement from Gridserve comes shortly after Prime Minister Boris Johnson brought the deadline for the UK’s ban on new petrol and diesel car sales forward to 2035.

Under Theresa May, the UK Government had initially introduced the ban on new petrol and diesel car sales with a 2040 deadline. Following criticism from green groups, including its own Committee on Climate Change, over the policy’s alignment with the UK’s 2050 net-zero target, Johnson moved in February to alter the deadline to 2035. 2035 is the date cited by the CCC in its initial recommendations framework on legislating for net-zero by mid-century.

The 2030 date had been backed by green groups and businesses operating some of the UK’s largest private-sector fleets, including Royal Mail.