Why hydrogen is essential in the global journey towards net-zero

In the third article of this series, Panasonic shares how it is working towards a net-zero future with an emphasis on hydrogen and fuel cells. 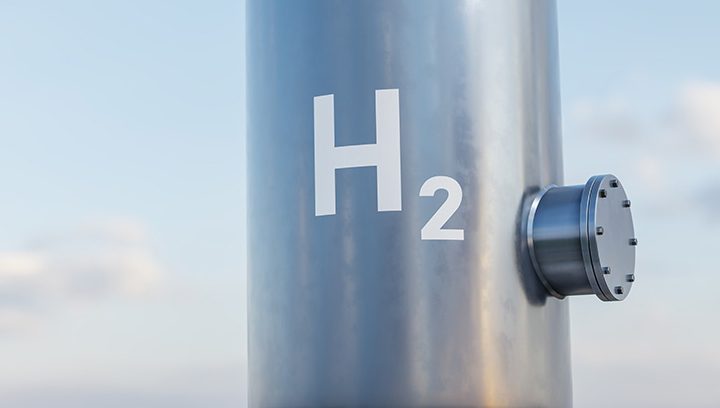 According to the International Energy Agency (IEA), hydrogen has a vast potential to become a critical part of a more sustainable and secure energy future. These findings are increasingly being turned into ambitions. For example, the ‘EU Hydrogen Strategy’ will see the EU prioritise green hydrogen, produced using wind and photovoltaic electricity, to transform its energy system in the race to be climate neutral by 2050.

The role of hydrogen fuel cells in decarbonisation

Whilst it still may be in the relatively early stages of adoption, hydrogen-powered fuel cell systems are a proven technology. Panasonic has been researching hydrogen energy technology for more than 20 years. In 2009 we made household fuel cells – a technology that uses hydrogen extracted from natural gas to produce electricity and heat – commercially available in the Japanese market. Today, nearly 400,000 hydrogen systems have been built into homes in Japan, of which Panasonic has installed roughly half of.

Fuel cells can produce the highest proportion of electricity of any combined heat and power (CHP) technology. It reduces dependence on centrally-generated power, while saving carbon emissions and potential electricity costs. Today, a residential fuel cell system – running on hydrogen extracted from natural gas – can achieve a saving of 1.4 tonnes of CO2 in a year compared to a regular gas boiler. 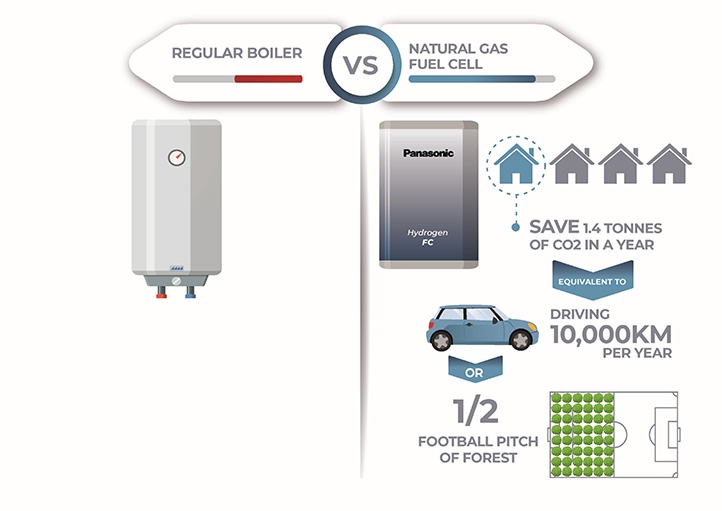 When the hydrogen is generated from renewable surplus energy such as PV (photovoltaic) panels during the day or by windmills during strong winds, to split water (H2O) into Hydrogen (H2) and Oxygen (O), the created hydrogen can then be stored and used to generate electricity at times when no sunlight or wind is available. Using a pure hydrogen fuel cell system makes it a 100% renewable energy solution.

Each year, Japan experiences several natural disasters such as typhoons and earthquakes which cuts off residential households and business off from the grid. To diversify and strengthen its energy infrastructure, the country aims to use fuel cells as a power source for transportation as well as stationary applications. This is of great importance during an emergency when dependency on a single source of energy wouldn’t be sufficient. Fuel cell technology works well here as it can be used as an emergency power supply during a blackout situation. In Japan many of the electricity grids are wired above the ground and therefore more susceptible to damage by typhoons as opposed to gas pipelines which are underground.

The roadmap for Japan foresees 5.3 million residential fuel cells systems being installed by 2030 equivalent to 25% of all households.

In Europe, Panasonic has been selling its natural gas fuel cell systems to the residential market since 2014, commencing in Germany. Sales have since expanded to the UK, Austria, France, Luxemburg, and Belgium.

For example, in collaboration with Japanese industrial company Tokuyama, Panasonic is currently testing ways to utilise hydrogen as a by-product from the chemical industry (caustic soda).

To drive the evolution towards net-zero forward, test sites and full operations of pure hydrogen fuel cells are required. Therefore, Panasonic is proud to be one of the first collaborating companies to realise these around the world. For example, in Japan, the Olympic athlete village in Tokyo will be turned into a city complex, a smart quarter if you like, of residential apartments, called HARUMI FLAG.

It is set within a beautiful area overlooking the bay and will accommodate approximately 12,000 residents by 2024. It will be powered by Hydrogen, realised with the provision of a hydrogen pipeline grid by Tokyo Gas, offering a pure hydrogen grid and directory. To this, we will install total 120kW Panasonic pure hydrogen fuel cells (5kW x 6 units in 4 district areas) to supply power for lighting and air-conditioning in common places of the condominium complexes.

Part of Panasonic’s development roadmap is that pure hydrogen fuel cells will be ready to launch in Europe before 2025. Timing will depend on the availability of the required infrastructure, but the CO2 savings will be immense for the residential as well as commercial and industrial market.

Analysts from the European Commission estimate that clean hydrogen could meet 24% of world energy demand by 2050, with annual sales in the range of €630 billion, but it will take a lot of work from all areas to meet such ambitious targets in a relatively short space of time. To transform hydrogen’s potential for the decarbonisation of industry, transport, and buildings into reality, investments, regulation, market creation, and research and innovation are required.

On 1st October 2021, Panasonic announced the launch of the first Panasonic pure hydrogen fuel cell generator – ‘H2 KIBOU’. KIBOU in English is ‘hope’ and expresses the desire to realise a hydrogen society.

Panasonic is currently building up its own pilot case for carbon-free manufacturing, an RE100 (renewable energy 100%) production solution, using locally produced hydrogen and its own pure hydrogen fuel cells. 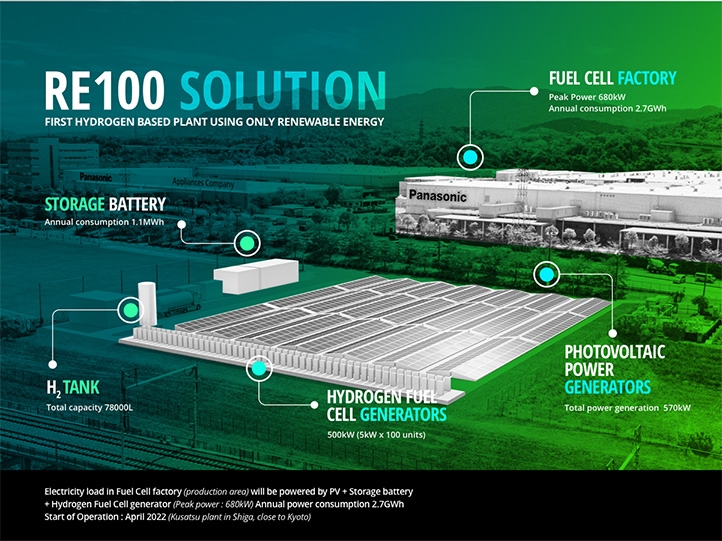 Construction began in October 2021 and demonstration will start around February 2022 and power supply provided from April 2022. This is the demonstration phase of a plan to offer an RE100 solution to B2B customers (factories, offices and other commercial customers) in 2023 and starting a full-scale business in 2024.

In the fourth blog article of this series, we will explore how hydrogen can and does power the commercial sector.

Also, read our previous articles in this series, on Net-zero: Collaboration or bust and Net-zero by 2050: What does it take to make this a reality?

Striving against climate change together – COP26 and beyond

The 26th UN Climate Change Conference of the Parties (COP26) will be taking place in Glasgow from 31 October – 12 November 2021. It is one of many important platforms that facilitate opportunities for discussion and identifying synergies for strategic partnerships. This year, Panasonic will be part of the Japan Pavilion and we would welcome the opportunity to meet with existing and potential partners to work together and contribute to an impactful global change.

Has this inspired you to work with us? For more information about our hydrogen fuel cells and wider solutions and commitments to sustainability, please head over to our Edie profile page where you can read more about our progress or simply contact us for more information.