Why sustainable business leadership must become the new normal post-IPCC

EXCLUSIVE: As businesses strive to bolster their sustainability commitments in the face of ever-growing climate challenges, policymakers must do more to make 1.5C targets the norm rather than the exception. 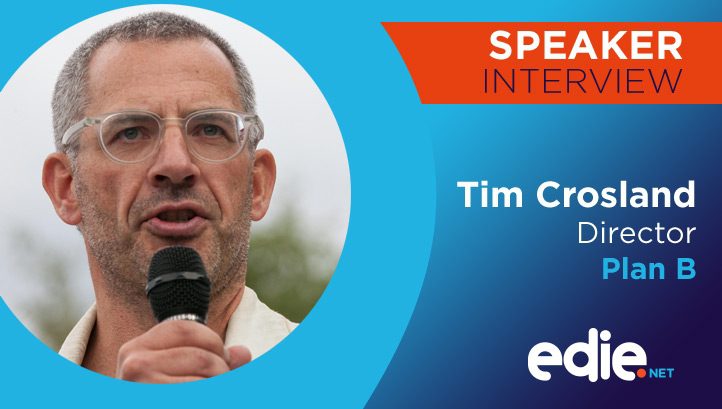 Tim Crosland is urging the UK Government to implement policies that will align all business actions with a 1.5C trajectory

That is according to Plan B’s director Tim Crosland, a former governmental lawyer who was instrumental in producing the 2015 Paris Agreement.

After assisting with the negotiations that culminated with the publication of the Paris Agreement at COP21 almost four years ago, Crosland, who is trained as a barrister, set up Plan B as a non-profit with a singular aim – to support strategic legal action against key drivers of climate change.

Since then, the organisation has launched a crowd-funded legal campaign against the proposed expansion of Heathrow Airport, lobbied for a 1.5C goal to be enshrined in UK law and called for laws which protect young people from picking up the “climate costs” left by their ancestors, to name a few of its high-profile cases.

Speaking exclusively to edie ahead of his appearance at the Sustainability Leaders Forum next week (scroll down for details), Crosland explained that the findings of International Panel on Climate Change’s (IPCC) recent landmark report on global warming – compounded by heatwaves, wildfires and prominent scientific research – could soon spur governments to pass legislation ensuring all businesses operate within a 1.5C trajectory.

“It doesn’t make much sense for thousands of different businesses to be interpreting this challenge and this complex science in different ways – but this is what we will end up with, without a strong steer from governments,” he said.

“The conversation has changed, but it’s quite difficult for businesses to know what to do with that and difficult to say when talk will transform into action. People are waiting to see what the Committee on Climate Change (CCC) recommends and what the UK Government does with it before acting.”

The CCC is currently working to provide the Government with options for the date by which the UK should set a net-zero carbon or net-zero greenhouse gas target by March 2019. The Government began exploring the need for carbon neutrality after the IPCC report revealed that limiting warming to 1.5C would require global carbon pollution to be cut by 45% by 2030 and come down to zero by 2050.

Its advice is due to be published in March, at which point, according to Crosland, the Government is likely to explore new carbon regulations for corporates. However, he added that Brexit may slow this process down.

“The general political uncertainty that we are all talking about at the moment will read into the pace of change, because any unified change needs a strong government to implement it,” he explained. “Naturally, the business community is a little sceptical as to whether that’s what they will get.”

While criticising the UK Government for failing to lay out a “holistic and progressive” decarbonisation framework for businesses, Crosland praised corporates such as BT and green campaign groups like Extinction Rebellion for “changing the conversation” around climate action.

Specifically, he argued that actions by such organisations – which have positioned themselves as leaders in the fight to tackle rising emissions – served to alter the approach taken by big-name media outlets and prove to policymakers that a sea-change is possible.

“I expect we will continue to see strong ambition from the public and businesses in the absence of strong government action,” Crosland explained. “We can all play our part in creating that collaborative, national response, however, and we shouldn’t hold our breath waiting for the government to create it.”

However, he also urged companies which have already adopted ambitious sustainability strategies to take further action outside of their own operations.

“If people over-emphasise the impact which a couple of examples of good practice can have, it will distract us from the basic problem of needed to tackle global challenges holistically and comprehensively,” Crosland added.

“I would urge businesses not only to get into a position where they can pat themselves on the back, but to examine their long-term approaches and see that their own business interests should lie in the avoidance of any trajectory above 1.5C.”

According to the IPCC, the difference between a 1.5C world and a 2C trajectory could be substantial in terms of both social and environmental sustainability. A 2C world would result in 10 million more homes being lost to rising sea levels and twice as many people experiencing water scarcity, its report claims, making it an environment in which current business models may struggle to thrive.

When asked how, precisely, corporates could start driving community-wide action on climate change, Crosland highlighted the reach which brands could have by running sustainability-related advertising campaigns.

As consumer trust in big-name brand depletes amid concerns around transparency, ethical issues and greenwashing, companies could benefit from “going for something hard-hitting” and being “honest about the fact that we are facing an emergency”, according to Crosland.

“This might sound a little far-fetched, but I would love to see businesses using their advertising to get the message across that everyone needs to pull together against rising carbon emissions,” he argued.

“This would serve an incredibly beneficial collective purpose while also creating a wonderful branding opportunity. I believe that any company doing this would make itself very attractive, particularly to young people.”

Crosland’s talk came off the back of several pieces of research which revealed that millennials want to buy from companies that have a purpose beyond their products and operations.

Communications agency FleishmanHillard Fishburn (FHF), for example, found that 93% of the millennial generation want to buy from companies that have social sustainability and environmental stewardship built into their ethos. The findings echo those of Deloitte, which revealed in 2016 that 56% of millennials will exclude companies that are not operating sustainably from their shopping lists.

Plan B director Tim Crosland will be appearing on Day Two of edie’s Sustainability Leaders Forum, to discuss what the future of sustainable business leadership will look like and how leading organisations can shift towards this new paradigm, today.

He will appear alongside representatives from the Woodland Trust, Kellogg, Whitbread and Engie, who will debate how best sustainability professionals can embed CSR within their organisation’s core operations.