The first flight of a hydrogen-powered, commercial-grade aircraft has been successfully completed in Bedford, while UK ministers face fresh calls to help scale up the domestic market for hydrogen produced using renewables. 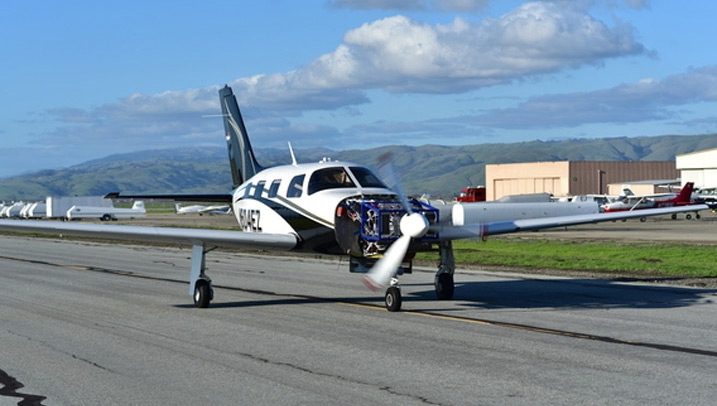 Inside the Piper M-class plane, compressed hydrogen gas is fed into hydrogen fuel cells, where it is combined with oxygen from the air in a process that produces water as well as electricity. The hydrogen is supplied by green gas producer EMEC Hydrogen.

The successful test flight brings the model one step closer to commercial viability for short-haul journeys such as London to Edinburgh. Zero Avia will now seek to complete a 250-mile flight from its base in Cranfield to Orkney, Scotland, by the end of the year.

“It shows that technologies to clean up air travel are now at our fingertips – with enormous potential to build back better and drive clean economic growth in the UK,” Zahawi said.

The Government is notably convening a ‘Jet Zero Council’ of Ministers, businesses, trade bodies and environmental groups on a collaborative mission to align the aviation sector with the 2050 net-zero target. In its short-term stimulus measures to combat the economic impacts of Covid-19, the Department for Transport has allocated £200m to projects developing sustainable aviation fuel (SAF), energy-efficient electric aircraft components, high-performance engines and wing designs intended to minimise fuel consumption.  This commitment is matched by £200m from the private sector.

Flight of fancy or time for action?

The announcement from Zero Avia comes in the same week that Airbus revealed three futuristic concept designs for zero-emission aircraft with hydrogen as the primary power source, claiming that they could operate commercial flights by 2035.

Two of the planes are suitable for long-haul flights and carrying more than 120 passengers, while a smaller aircraft capable of transporting up to 100 passengers on short-haul trips of 1,000 nautical miles or less has also been developed in concept.

Hydrogen is not, however, a silver bullet for aviation. Most experts see the fuel source playing a role alongside electric aircraft, SAF and simply reducing the demand for flights, given that hydrogen is not yet a mature technology and that 99% of the hydrogen produced globally each year.

On this latter point, RenewableUK this week published a study outlining the benefits of scaling up the UK’s ‘green’ hydrogen economy and the changes needed from policy and business to bring these benefits to fruition.

The study recommends that the Department for Business, Energy and Industrial Strategy (BEIS) adopts a cost reduction target of £2 per kilogram of green hydrogen by 2030 – a target that could be realised by bringing 5GW of renewable electrolyser capacity online within the same timeframe. At this reduce price, green hydrogen would be cost-competitive with hydrogen produced using fossil fuels.

BEIS should also commit to helping an additional 5GW of renewable electrolyser capacity online between 2030 and 2035, to provide longer-term certainty to investors, RenewableUK recommends.

“Renewable hydrogen is the next big global industry in the decades ahead [and] the UK is well-placed to lead this new industry, with plentiful renewable resources and world-leading hydrogen companies,” RenewableUK’s director of future electricity systems Barnaby Wharton said.

On Wharton’s points, the report makes reference to the ‘Gigastack’ green hydrogen project in the Humber estuary, which is being delivered by Equinor as part of the region’s net-zero industrial cluster. Other hydrogen hubs are taking shape in the North West and the Isle of Wight, where major projects have been granted planning permission.

Large-scale hydrogen projects with renewables could soon be included in the UK’s Contracts for Difference (CfD) auctions, after a recent government report identified the mechanism as a favoured option for scaling up ‘green’ hydrogen technologies.