Circular economy for smart devices: Opportunities in the US, UK and India 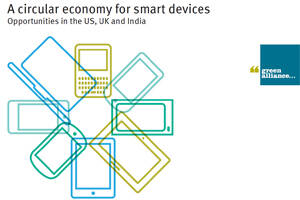 Smartphones, tablets and laptops have moved from the fringe of computing to the mainstream in just five years. Sales of these smart devices exploded as consumers saw the benefits of seamless connectivity, and were drawn to the simplicity. of new user interfaces.

In many cases, the environment benefited too, as energy efficient devices displaced older computers, and new mobile-enabled cloud systems became platforms for efficiency across the economy.

Unfortunately, this isn’t the whole story. Smart devices are smart, but the physical systems they end up in are not: 89 per cent of mobile devices in the US were thrown into landfill in 2010, even though the resources they contain mean it is economically sensible to recycle them.

Many millions of usable devices are left forgotten in drawers once their owners upgrade, despite a robust second-hand market. This wastes perfectly good devices, frustrates consumers and harms the environment.