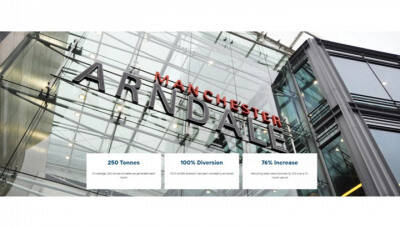 Located in the heart of Manchester city centre, Manchester Arndale Shopping Centre is one of busiest and most widely visited retail destinations in the UK. Reconomy has provided waste management services to the centre since 2014, helping establish numerous best practices to fulfil its sustainability target of achieving 100% landfill diversion.

By late 2015, Manchester Arndale had been consistently maintaining 100% landfill diversion for over 12 months. It was therefore agreed between the centre’s management team and Reconomy that the time was right to focus on further sustainability targets. In addition to ensuring landfill diversion, focus switched to look at the centre’s recycling rates, which had remained static at around 30% throughout 2015. Looking at ways to improve this would not only help reduce the centre’s waste costs, it would also allow it to exceed its own Corporate Social Responsibility targets for environmental best practice.

In January 2016 Reconomy and the centre’s management team worked together to carry out a comprehensive review of the existing waste management strategy. This identified several key changes to waste practices that were needed to boost levels of recycling. To bring about a cultural change in attitudes towards waste, it was immediately apparent that increased opportunities for efficient waste segregation were needed. This would help to minimise the volume of materials being disposed of as ‘general waste’, which cannot be easily recycled due to the number of ‘crosscontaminated’ waste streams typically found within it – particularly food waste.

Reconomy swiftly arranged for the change of use of a general waste compactor at the centre, which instead started collecting dry mixed waste. This allowed for the recycling of light mixed waste streams including plastic bottles, aluminium cans, cardboard and paper. Separate bins for food were also placed nearby at the source of the waste, allowing it to be separated from recyclables and efficiently disposed of. To manage the recycling of wood waste, a repatriation scheme was established for all unbroken wood pallets, allowing for them to be collected at no cost and reused elsewhere. This also helped ensure they weren’t disposed of amongst the centre’s other waste, helping to minimise volumes and reduce unnecessary costs.

A 20-yard roll-on, roll-off (RoRo) used to collect timber was also removed after high-levels of cross-contamination were reported. This was replaced with a 12- yard enclosed wood skip, making it far more difficult for cross-contamination to occur. This also helped with utilisation rates by encouraging the more efficient loading of wood into the smaller skip, thereby minimising wasted space.

Throughout the transition of waste strategy from landfill diversion to recycling, both the centre’s management team and Reconomy were acutely aware of the importance of receiving full buyin from everyone based at the centre. This meant collaborating closely with office tenants, retailers and clients. A comprehensive re-education plan was established in February 2016, involving the delivery of regular toolbox talks by Reconomy’s Contract Managers and the centre’s management team. These talks, which were accompanied by the distribution of waste segregation literature, were offered to all centre personnel, underlining the importance of their role in the new waste strategy. Updated signage and recycling posters were also widely displayed as part of the high-visibility campaign. Data from the centre’s various waste collection areas was also carefully scrutinised. This meant that any office tenants, retailers or other personnel based within the vicinity of poorly performing areas could be swiftly targeted and offered more training to help achieve the targets.

Between November 2015 and November 2016, recycling rates at Manchester Arndale rose from 30.91% to 54.51% – representing a 76% improvement. This equated to an additional 450 tonnes of waste being recycled through the year, saving the centre a potential £30k (circa) in waste disposal costs. A new target of reaching a 70% recycling rate by the end of 2017 has now been set at the centre. Reconomy is also being consulted about plans to expand the centre’s existing food court to help ensure a best practice approach to waste minimisation is maintained. In April 2017, the waste management advances made by Manchester Arndale with the ongoing support of Reconomy were formally acknowledged, with the centre picking up the Best Sustainability Initiative Award at the 2017 M&G Real Estate Shopping Centre Forum Awards.