7 things you need to know from Science, Innovation and Gender Day at COP26

The presidency programme for the second and final Tuesday (9 November) here at COP26 was dedicated to innovation for a low-carbon and climate-resilient world, and also to the importance of gender equality in tackling the climate crisis. Here, edie rounds up seven talking points from the day. 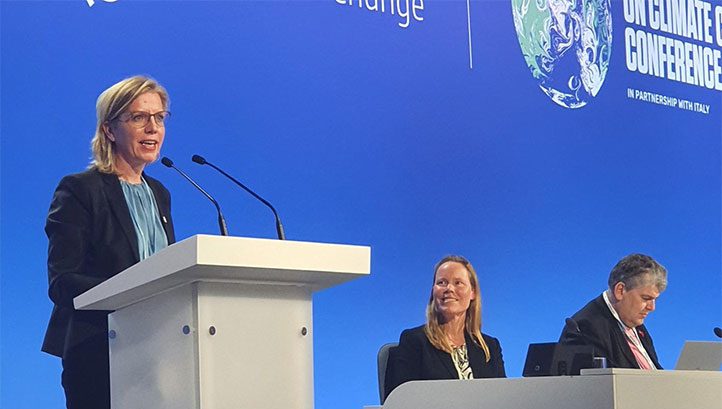 After Monday’s (8 November) Adaptation, Loss and Damage-related events packed out the Scottish Events Campus, it was another busy day on-site today, with negotiations continuing on the final outcomes and pavilions, cafes and the media centre all full.

Today’s focus areas were science and innovation, and the importance of gender equality in tackling the climate crisis. There were also several big announcements on adaptation, following a disappointing and slow day yesterday – plus confirmation that a draft version of the final outcomes will be published overnight.

Here, edie rounds up seven of the day’s headlines.

1) Confirmation that a draft negotiations document will come overnight

COP26 President Alok Sharma confirmed in his press conference today that, following the publication of a so-called non-paper summary of possible inclusions in the final negotiated agreements over the weekend, the first draft paper will come overnight.

Green groups have expressed disappointment that the non-paper made no mention of scaling back fossil fuel production. Sharma said that “all of the key issues raised with us so far” were in the non-paper.

Sharma also confirmed that the new document will enable negotiators and delegates on the ground to communicate with colleagues and their national leaders remotely ahead of Friday (12 November), when the final document is meant to be agreed upon before 6pm. Most COPs overrun, however, and the to-do list this time is the longest yet.

Climate Action Tracker (CAT) today published a new analysis of the temperature pathway of commitments made at COP26, stating that they are likely to result in 2.4C of warming. The International Energy Agency (IEA) had put the pathway at 1.8C but CAT has pointed out that most long-term net-zero plans from nations do not have credible delivery plans, which the IEA has not fully factored in.

China, India, the UK, US and EU are among a cohort of 23 governments that announced new plans to catalyse cleantech investment today, under the ‘Mission Innovation’ platform first convened at COP21 in Paris. Participating nations collectively accounted for 90% of global public investment in low-carbon energy innovations made last year.

Mission Innovation claims that the plans are consistent with an agreement signed by more than 40 world leaders on scaling cleantech and renewable energy solutions last week, called the ‘Breakthrough Agenda’.

Separately, an independent body of experts from the International Energy Agency (IEA), International Renewable Energy Agency (IRENA) and UN High-Level Climate Action Champions was appointed to hold nations participating in the Breakthrough Agenda to account. The body is responsible for what is called the ‘Global Checkpoint Process’ – ensuring that nations report annually, and advising them on how to move faster if needed.

Announcements on Adaptation finance from nations were scarce yesterday, despite Alok Sharma promising a statement in the afternoon.

This morning, some of this information has finally been forthcoming. An Adaptation Research Alliance (ARA) has been launched, convening 90 governments, research institutions, community groups and academics in a drive to increase the resilience of communities most affected by climate change.

The ARA’s first major programme is called CLARE and is jointly funded by the UK and Canada, to the tune of £110m. The scheme will support the development and rollout of solutions to benefit at least five million people, predominantly in Africa.

Separately, 47 countries that represent more than one-third of the world’s healthcare emissions have committed to transforming healthcare systems so that they are climate-resilient and low-carbon. Participants in this pledge include Malawi, Spain, Morocco and the US.

The Fund was created in 2001 to enable the world’s most climate-vulnerable countries. It has, to date, provided $1.7bn in grants for projects supporting climate adaptation.

A report from the World Business Council for Sustainable Development (WBCSD) this summer revealed that less than 1% of building projects currently account for lifecycle carbon impacts. Most commonly excluded from accounting is information on carbon embodied in projects through building materials.

It is welcome, then, that an Industrial Deep Decarbonisation Initiative (IDDI) launched today, whereby nations have committed to disclose the embodied carbon in major public construction projects by 2025 at the latest. This will provide a baseline for developing a 2030 reduction target for embodies carbon, on the road to net-zero by 2050. The governments of the UK, the United Arab Emirates (UAE), India, Germany and Canada are participating.

In related news, High-Level Climate Champion Nigel Topping stated that 15 large businesses in the concrete value chain are preparing to launch a ConcreteZero buyers club, which will signal demand for net-zero concrete to producers. The initiative will be modelled on SteelZero from The Climate Group, which convenes steel buyers in committing to ensuring that 50% or more of the steel they buy from 2030 is certified as net-zero.

A group of 28 global companies spanning the mining, manufacturing and financial sectors has pledged to grow both the demand and supply of green hydrogen. Hydrogen produces zero emissions at the point of use, but the carbon footprint of supply chains varies vastly based on how it is produced, and more than 90% of the world’s production is currently ‘grey’ – fossil-fuelled.

The new commitment is orchestrated by the World Business Council for Sustainable Development (WBCSD) and the Sustainable Markets Initiative (SMI), which estimate that it will create a demand of 1.6 million tons per annum (mtpa) of “lower-carbon intensity” hydrogen. Click here for edie’s full story.

Career guidance technology firm SkillLab today opened its Just Skills Hub, which will support policymakers and businesses to develop and implement the skills plans needed to enable the low-carbon transition in high-emitting sectors, in a manner that protects worker livelihoods and communities.

The hub will also provide practical information to workers. The EU’s Joint Research Centre and the UN High-Level Champions will support SkillLab in scaling the initiative.

By the International Labour Organisation’s estimates, up to six million jobs in high-carbon sectors including fossil fuels are likely to be lost by 2030. But a well-managed transition could create 18 million jobs in the same timeframe.

The launch comes shortly after UK Chancellor Rishi Sunak confirmed that large UK firms in high-emitting sectors will be mandated to publish net-zero transition plans by 2023, with a new verification standard under development.

The Global Partnership on Artificial Intelligence (AI), which comprises 18 national governments and the EU, has today published a report outlining how governments can support AI in delivering their net-zero transitions. It contains 48 policy and business recommendations and includes case studies of environmental AI initiatives already underway. You can read the paper in full here.

You can also listen to today’s episode of the COP26 Covered podcast for a more in-depth dive. This episode features exclusive interviews with Project X Global, Polestar and entrepreneur Dhruv Boruah.