Climate campaigners have expressed relief after an application to turn more than 250 acres of greenbelt land near Newcastle into an opencast coal mine was blocked. 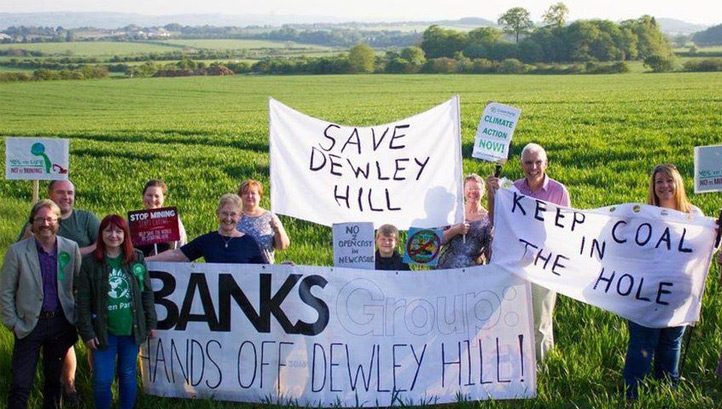 The application for the Dewley Hill project was submitted earlier this year by Banks Mining, which argued that the project would provide essential fuel to the UK’s steel and cement sector. Its plans were built around extracting up to 800,000 tonnes of coal and 400,000 tonnes of fireclay each year.

Banks Mining also pointed to the job creation potential of the project amid the backdrop of Covid-19. It argued that the mine would create 200 full-time equivalent roles for the local area.

Newcastle City Council, however, concluded that the project was not compatible with the UK’s climate targets or its own commitment to net-zero by 2030 and the UN’s Sustainable Development Goals (SDGs).

Moreover, the UK Government has enshrined in law a commitment to stop the use of thermal coal power plants by 2024 – a deadline recently brought forward from 2025. The ban does not apply to the materials sectors Banks Mining was intending to supply, but there is the risk that legislation will become tighter in the near future. Citing this legislation, Ministers recently confirmed plans to call Cumbria council in on its controversial decision to approve West Cumbria Mining’s deep coal mine near Whitehaven.

“Coal is our history, not our future,” Newcastle City Council’s leader Nick Forbes said. “Newcastle was built on coal, and it is hugely symbolic that we have committed ourselves to renewable and sustainable energy sources in future. This is real leadership on climate change.”

“There is no return to business as usual. We must now draw on our city-wide, world-leading expertise and resources to be the example of a post-industrial city that has mitigated its own emissions, adapted to climate change, prepared for a rapidly changing economy and deliver our net-zero vision for the city.”

The council’s decision on Dewley Hill, compounded by controversies in Cumbria and the fact that Durham County Council recently blocked Banks Mining’s application to extend the lifetime of another coal mine, points to a positive trend for climate campaigners. Groups including Greenpeace, Friends of the Earth and Coal Action Network had been opposing the project.

Friends of the Earth campaigner for the northeast, Simon Bowens, said Newcastle City Council’s decision “will hopefully bring down the curtain on opencast coal mining in England”.

Banks Mining is now considering whether to appeal the decision.

In related news, non-profit the Good Law Project and Ecotricity founder Dale Vince have announced that they will support Plan B Earth and Friends of the Earth in their legal challenge against Heathrow Airport’s third runway.

The Supreme Court decided to allow the Heathrow Airport expansion earlier this month, despite the fact that the Court of Appeal ruled it unlawful on climate grounds earlier this year. Campaigners said at the time that this was “no easy green light” for the project, as further legal challenges are being planned.

Vince and the Good Law Project co-published an open letter over the weekend, stating that they are urging Ministers to change the UK’s Airports National Policy Statement (NPS). The Government has repeatedly argued that the NPS was created in alignment with the Paris Agreement, but critics argue that loopholes remain and that stricter requirements are needed to update the framework in line with net-zero.

If the NPS is not changed, the letter states, a further legal challenge will be launched.

“As things stand, Heathrow Airport could seek permission to expand under the lax planning regime created before the government set its ‘world-leading net-zero target’,” the statement reads.

“We think that’s unlawful. We think the government needs to revise the airports NPS to take account of the net-zero commitment in section one of the Climate Change Act 2008.”

The Good Law Project told media representatives that any future challenge would “have a strong chance of succeeding”.

A third runway would see Heathrow Airport go from overseeing 480,000 takeoffs and landings each year to around 740,000. It would not be completed until 2030.

While the initial drive to expand the Airport was led by the Government, Ministers have since backed down. It is now the corporate operator of the airport which is leading the legal case for the development.