The UK Government wanted COP26 to keep the 1.5C trajectory of the Paris Agreement "alive" and the verdict is that it has, but just barely. But with some nations set to renegade on mechanisms included in COP26's Glasgow Climate Pact, it is clear that businesses need to become a unified driver of the net-zero movement. 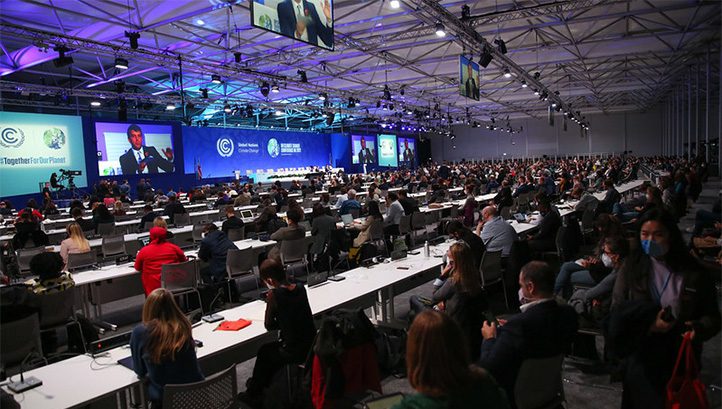 Businesses had a key role at COP26

The BBC is today (16 November) reporting that the furniture used for delegates in the Blue Zone at COP26 could sit in the car park tents “for months”. COP26 is done, after all, a new global climate pact agreed, so the clean-up can wait while the dust settles.

The results of COP26 and the Glasgow Climate Pact are divisive. The deal stretches nations on topics like coal and finance more than they’ve ever been before – even when considering the last-minute intervention from India to weaken the text on coal from phase-out to phase down. Yet, in the eyes of the protestors that passionately marched across the streets of Glasgow during COP26, the mechanisms agreed at the two-week summit aren’t sufficient to combat the most severe climate-related risks.

Both of those statements are correct. The Glasgow Climate Pact is historic in that it marks a truly uncomfortable transition for a lot of climate laggards, and yet research suggests that the 1.5C ambition of the Paris Agreement is alive, but just barely.

1.5C alive but not thriving

Experts at Carbon Brief took a deep dive into whether the Glasgow Climate Pact is sufficient in keeping 1.5C alive. It found that current policies will “lead to a best-estimate of around 2.6C to 2.7C warming by 2100”, but this can be reduced to 2.4C if countries meet their nationally determined contributions (NDCs). If national net-zero pledges are met, however, average warming could be reduced to 1.8C by 2100. 1.5C is in touching distance, but nations aren’t dragging themselves over that threshold.

There’s also the issue that just because something has been cleaned up, doesn’t mean it will stay clean for long.

Just days after the gavel came down on the Glasgow Climate Pact, Australia, the second-biggest coal exporter and fifth-biggest producer, has already suggested that it won’t work on a new national climate target in 2022, despite that being one of the key instruments included in the Pact. The US is another high-emitting nation hinting the same.

The climate crisis is urgent, but the timeframes attached to the means to combat it are long-term. The political will to tackle something with a 2030 deadline – like new climate action plans – is lessened by the fact that governmental regimes can be short-lived. We’re asking politicians who may not even be in power in five years’ time to set up policies that will shape markets for the next three decades. This is compounded even further by the economic crash caused by the coronavirus pandemic. To a lot of politicians, the economy is urgent and the climate crisis can wait.

The role of business is to highlight that the economy depends on climate action.

Will business foot the bill?

Even with the Glasgow Climate Pact agreed, 1.5C is on life support and many are looking to the private sector to provide it with an injection boost.

In a speech to the CBI earlier in the year, Kerry told an audience that trillions were needed to combat the climate crisis and to support low-income nations. Developed nations failed to meet the $100bn finance target, which has now been renegotiated to be delivered through to 2025, and there is no guarantee that this target won’t be missed again.

It is clear that policymakers and negotiators are looking to the private sector to transform the net-zero movement.

GFANZ members are required to transition their portfolios in line with the Paris Agreement and are being pushed to work towards 1.5C rather than 2C temperature pathways. The Alliance now accounts for 40% of the world’s total financial assets, up from $90trn at the start of October. These assets are managed by 450 firms across 45 nations, from all parts of the financial industry.

The Alliance isn’t without its issues. Reclaim Finance is highlighting the fact that only one-third of the Alliance’s collective assets are being aligned with a net-zero by 2050 roadmap, and that this roadmap came from the Alliance itself.

But with the finance sector angling trillions into low-carbon projects and portfolios it is here that businesses can have the biggest influence on the net-zero movement.

Net-zero pledges are driving markets in the private sector. Almost two-thirds of FTSE100 companies have signed up to the UN’s Race to Zero campaign, for example, designed to accelerate the adoption of credible net-zero targets at, during, and beyond COP26.

Now, large UK firms participating in Race to Zero collectively represent a total market capital of £1trn and a combined annual turnover of £700bn. This is before smaller businesses, non-listed firms and businesses covered by industry collaborations, like Water UK’s net-zero by 2030 roadmap, are accounted for.

These collective pledges from the private sector can help make notable dents in the mission to reach 1.5C. The same analysis from Carbon Brief noted that big pledges made at COP26, such as the methane pledge, coal phase-outs and the Race to Zero campaign, have likely “shaved an additional 0.1C warming off what was implied under commitments out to 2030”.

Businesses can act as the driving force to unleash innovation across low-carbon markets.

At COP26, Boeing, Amazon and Volvo Group were named among the members of a new coalition of businesses pledging to support the development of low-carbon technologies for hard-to-abate sectors like aviation and heavy industry.

Called the First Movers Coalition, the initiative is being led by the World Economic Forum (WEF) and the John Kerry. The Coalition has garnered the support of 29 founding member corporates across sectors including aviation, shipping, trucking, steel, cement, chemicals and aluminium.

Also represented is the direct air capture sector. Globally, the collective capacity of all operational CCS and carbon capture and usage (CCU) plants, including direct air capture, is estimated to be 38.5 million metric tonnes. These arrays are addressing less than one-thousandth of global emissions annually, which now exceed 50 billion tonnes. Proponents of CCS and CCU claim the market and installed capacity is growing rapidly, but that support from businesses needing the service is now crucial.

All founding members of the new Coalition have made a specific commitment regarding cleantech in at least one sector. The ambition is to create a rapidly-scaling market for specific technologies by 2030 – and a market that will continue expanding through to 2050.

Companies in the aviation sector are committing to using electric and hydrogen aircraft by 2030, as well as procuring lower-carbon options in the sustainable aviation fuels (SAFs) space. Shipping carrier sector members have committed to use zero-emission fuels in new and in retrofitted zero-emission vessels by 2030, with these furls accounting for at least 5% of their distance travelled by the end of the decade.

In the trucking sector, companies have committed to ensuring that at least 30% of their heavy-duty and 100% of their medium-duty truck purchases will be zero-emission trucks by 2030. Only zero-emission vehicles should be contracted or purchased going forward. Retailers and manufacturers will also set these requirements for trucking service providers.

Steel is the final sector for which the first phase of shared commitments has been launched. Steel users commit to ensuring that at least 10% of their annual steel procurement volumes by 2030 is met with net-zero or near-zero materials. Outside of the First Movers Coalitions, purchasers are already putting pressure on manufacturers through forums such as The Climate Group’s SteelZero.

Markets in developed countries are changing as a result of business intervention. In developing and low-income countries, businesses are using their influence to overcome national barriers to renewables. Google, for example, lobbied and engaged with the Taiwan Government to unlock an Electricity Act Amendment that enabled renewable energy purchasing.

With nations like Australia, Thailand and Japan all turning back to their trusted fossil fuel sectors just days after COP26, it is important that businesses not only spur demand for low-carbon solutions, but engage with these nations to help them overcome the barriers on the road to net-zero.

The Glasgow Climate Pact talks of a “just transition” and with crude oil price rises causing nations to sweat over their workforces, businesses need to gain access to clear roadmaps for decarbonisation that helps sectors upskill their workforce to ensure all members of society and brought on this journey.

COP26 is over and the furniture may remain unused in the carparks for months to come, but the trajectory that the Glasgow Climate Pact has created is only just beginning. The role of the private sector is to clean up the political confusion and backtracking with a clear and unified message: “Net-zero needs to be inevitable”.

Net-Zero November: Join the conversation during edie’s mega month of content and events

As critical negotiations at COP26 formally start, the award-winning edie content has launched Net-Zero November – a return to an entire month’s worth of digital content and live events, all dedicated to accelerating the race to a more resilient, zero-carbon economy.

Brought to you in association with edie’s headline partner EDF, Net-Zero November will offer edie readers an array of net-zero-themed exclusive interviews, downloadable guides, reader blogs, virtual events and podcasts throughout the month.

Click here for a full run-down of the agenda and information on how you can get involved.