Swedish lessons: Can data management enable the UK to deliver a net-zero economy?

The UK's net-zero climate target has been widely welcomed, but is currently lacking some actual points of delivery. Fortunately, Sweden's own net-zero target can teach politicians some interesting lessons, including how big data and digitisation can mobilise action plans.

Shalit (pictured) turned pages of data into one poster and then an online database. Image: ClimateView

Net-zero climate targets are ‘en vogue’ right now, but their long-term timeframes lack the sense of urgency and immediacy that climate change perhaps requires. They answer the ‘why’, ‘what’ and ‘when’, but in most cases, the commitments tend to skip on the ‘how’.

Analysis from the Energy and Climate Intelligence Unit (ECIU) has found that 16% of GDP is now covered by net-zero carbon emission ambitions, with fifteen nations, states and regional areas intending to reach the target by 2050 at the latest. It’s understandable that these targets are missing a lot of tangible actions, as the transformation of entire economies takes time, but they run the risk of nations committing to net-zero and then parking the actual delivery of it for a later, undetermined date.

Net-zero targets are the latest evolution in national efforts to tackle climate change. A decade on from the failed climate negotiations at the UN Copenhagen Summit, a handful of Governments have aligned their climate ambitions with the latest science in a bid to limit catastrophic climate damage.

This new wave of leadership is welcome and unprecedented. However, the nations venturing out towards net-zero emissions are in uncharted territory, and as such the targets are more aspirational than they are tangible.

Sweden was one of the first nations to set a net-zero target, in this case for 2045. Sweden's GHG emissions are among the lowest in the EU and OECD but the nation is facing recent problems to decarbonise in areas such as transport and heat – much like the UK. In fact, emissions increased year-on-year in 2018, although GDP growth is outstripping emissions increases.

To remedy both short-term and long-term decarbonisation issues, the Swedish Climate Policy Council enlisted Stockholm-based start-up ClimateView to create a publicly available digital platform that outlines policy gaps to create the foundations for a digital roadmap to meet net-zero emissions by 2045.

According to ClimateView’s chief executive Tomer Shalit, whose background is in agile business development for project management, the roadmap helps ignite discussions around climate policy in the same way that any business that wanted to transform its own model would have to engage with multiple stakeholders.

“I’ve spent a lot of time with banks and insurance companies, but I wanted to start applying solutions to the most important and complex problem of all, climate change,” Shalit tells edie. “Then I thought, ‘what if Sweden was my client’?

“We are working with the Swedish Climate Policy Council to address the climate change issue. But we’re not making new plans. ClimateView is just sharing and visualising the data the Government had collected. Presenting it in an accessible way is such an important part of getting people to the table to find gaps and come up with solutions.”

ClimateView’s solution is akin to Russian Dolls. A lot of Sweden’s climate data is entombed in books that could rival Homer’s 270-plus page Odyssey in terms of size; Shalit’s platform makes this data more accessible by shrinking the text that surrounds them. He started by taking data from multiple documents and presented it via one 6.5-foot-long poster that was presented to both the Council and to energy firm Vattenfall, which has helped develop the online version of the tool.

From here, ClimateView has successfully digitised this data into a tiered and easily navigable online “Panoroma” which outlines the current sources of Sweden’s emissions by sector before dropping into the final tier which highlights current policies and their intended impact. 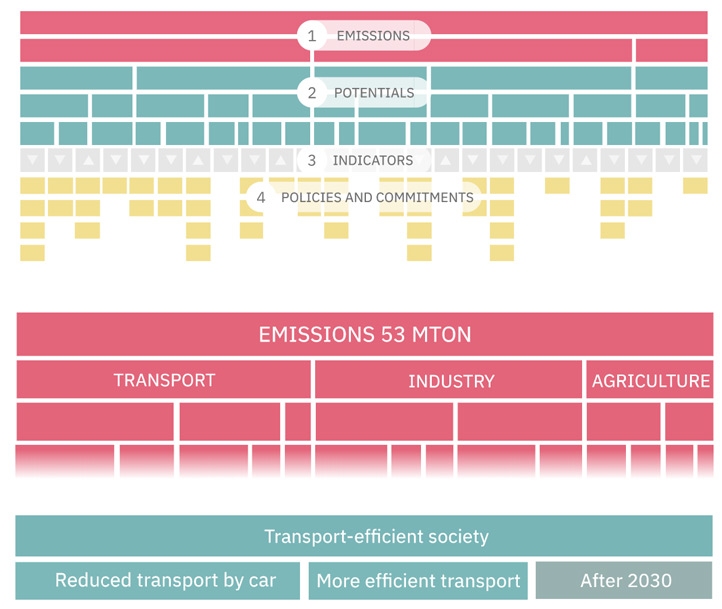 With net-zero covering the entire Swedish economy, it has to reach across Government departments and asking ministers to digest all that data is unrealistic. Shalit believes this birds-eye view of the nations’ climate policies will act as a catalyst to introduce new legislation that accelerates progress against the goal.

“If everyone is in charge of their own silo, then nobody's in charge of the big picture,” Shalit says. “What we've done with this platform is to take all these long-term goals and then start breaking them down into shorter-term targets by sector or by subject, that are measurable. The Government now has a clear picture of what's been done, where the gaps are and what needs to be done.”

A quick trawl through the transport section of this Panorama shows that a carbon tax introduced in 1991 has had a mixed impact on reducing emissions from road transport, while a “climate step” links the cost of projects at a local level to the associated emissions. In time, ClimateView should be able to add policy impact post-2030, to outline how close it pushes them towards a net-zero goal.

The public version of the platform is just one month old, but its launch is timely.

In recent months, the UK declared a climate emergency and approved legislation in Parliament on a net-zero goal as one of ex-Prime Minister Theresa May’s final policy announcements.

These targets were announced against a backdrop of public outcry on actions to combat climate change. Youth climate strikes orchestrated by the talismanic Greta Thunberg and the provocative Extinction Rebellion protests are, fortunately, built on the science listed in the Intergovernmental Panel on Climate Change (IPCC’s) special report, which calls for net-zero emissions to be achieved by 2050 at the latest.

But, amidst a major new Cabinet reshuffle in the UK, do new ministers easing into new roles have the time to read the Committee on Climate Change’s (CCC’s) 275-page recommendation report for a net-zero target? Arguably not, especially when Brexit continues to dominate every political discussion.

Crucially, the CCC believes that reaching net-zero by 2050 can be done using between 1-2% of GDP in 2050. This is the same level of funding currently allocated to work related to compliance with the Climate Change Act. However, some politicians have cast doubt over the achievability of this target, creating the need to get more people “to the table”, as Shalit puts it, to come to an agreeable roadmap.

Instead, a platform like ClimateView’s could be a viable option in the bid to streamline and accelerate climate action, especially in areas that green groups are demanding action in, such as transport and the built environment.

ClimateView is already in discussions with cities like Uppsala and Malmo, as well as other countries and even some businesses about adopting its innovative model to achieve net-zero emission goals.

Shalit notes that more nations and municipalities will set net-zero targets in the near future, and that data management is one of the first action points that should be addressed. Obviously, he wants ClimateView to be a part of the data management process.

“The UK and France have both set net-zero targets now, and a lot of people now know the need for these targets,” he adds. “However, these targets are also scary and the change can cause a lot of problems. But, if you can use data to start outlining the first steps towards this target it will bring more place marching towards net-zero.

“You can manage what you measure. If you don't break it down into small pieces, it's not going to happen. It's just as simple as that.”

While Sweden can forge ahead using the ClimateView platform, the UK’s efforts to reinforce itself as a leader on climate legislation were boosted by the announcement that the nation will host COP26 in 2020. A little over a year away, politicians have a chance to use the event to showcase a deliverable roadmap to the net-zero target and, therefore, the UK’s contribution to the Paris Agreement.

Doing so would set a new precedent for other nations to follow, and nation by nation, the world can start using big data to drag its way out of the climate crisis and deliver a low-carbon future.