New statistics from the Department for Business, Energy and Industrial Strategy (BEIS) have confirmed that low-carbon generation accounted for more than 51% of the electricity supplied in the UK in 2019, a 2% growth on 2018 levels.

Renewable energy production rose by 4.9% in 2019, with bioenergy outputs growing by 2.1% and “a record high level” of wind and solar capacity delivering an 11% growth. Nuclear output fell by 14% - the lowest level since 2008 – due to the summer power outages.

Production of coal fell to new record lows, recording a 14% decline in 2019, but oil production actually rose by almost 2%, largely due to new production from the Clair Ridge field which opened in late 2018. Gas production was down 1.3% in 2019. 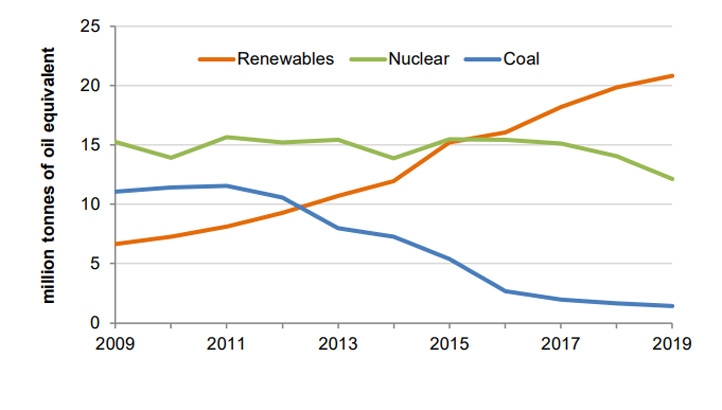 Primary energy production fell for the first time in four years, down 0.6% compared to 2018 to 129.2 million tonnes of oil equivalent. Energy production in 2019 was measured at 43% of the UK’s peak production levels recorded in 1999. Energy consumption similarly decreased, this time by 2%.

Last August, it was revealed that the amount of energy generated from coal sources in the UK fell to an output of 0.7% - a 63% decline on the same period the year prior, In fact, the first three months of 2019 saw the electricity grid clock up 650 hours of coal-free generation - more than was achieved during the entirety of 2017.

Despite the progress, it has been estimated that the UK will need to facilitate a four-fold increase in low-carbon energy, including expanding offshore wind capacity by up to 75GW, in order to reach its net-zero emissions commitment for 2050.

Research states that the 155TWh of clean energy in 2017 will need to reach 645TWh by 2050. While this can be accelerated by an additional 75GW in offshore wind capacity, the reports warn that policy plans to limit nuclear capacity in the mid-2030s will hinder the net-zero target.