The world's largest solar-powered boat is en route to Paris for the COP21 climate conference, where it will be moored up as an 'ambassador vessel' to draw attention to the key issues of ocean plastic waste and maritime emissions.

The catamaran will play host to six environmental conferences and events during COP21: Credit Vincent Brunet

The MS Tûranor PlanetSolar boat, renamed the "Race for Water" boat, will be officially 'christened' by the Race for Water foundation on 23 November and will drop anchor on the river Seine in Paris for the two-week duration of the COP21 talks.

The vessel will play host to six environmental conferences and events during COP21, allowing delegates and the public to find out more about the effects of plastic pollution in the oceans.

It will also provide a visual indicator of the innovative solutions that currently exist and could be scaled up in the maritime sector, where global carbon emissions could rise 250% by 2050. 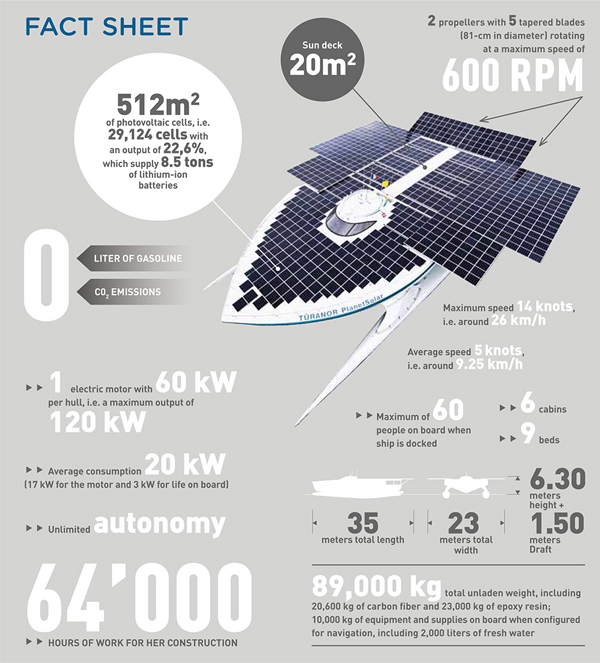 After Paris, the zero-emitting vessel will act as 'the voice of the Ocean’ as it is prepared for new expeditions in the service of ocean preservation.

The Race for Water boat became the first vehicle to complete a solar-powered trip around the world with previous owner PlanetSolar SA. The company has since donated the boat and its innovative solutions aimed at energy independence to Race for Water. PlanetSolar will remain in charge of the vessel’s energy system developments, which have so far seen 512m² of solar panels and 8.5 tonnes of lithium-ion batteries installed.

“We are pleased to be able to make the most of the substantial experience we have acquired throughout the design, optimisation, and operation of the MS Tûranor PlanetSolar, and to offer our services for projects that require tailor-made energy solutions," said PlanetSolar SA chief executive Pascal Goulpié.

“The experience acquired in solar navigation will help serve a sector that must reduce its gas emissions and its environmental impact."

To reduce maritime emissions, new partnerships are being formed to help drive innovation in the sector while simultaneously lowering carbon emissions.

With the Paris climate talks just a few weeks away, a number of green logistics schemes are cropping up around the city. Nissan and Renault, for example, have announced they will provide 200 pure electric vehicles (EVs) to transport delegates during the COP21 talks in Paris from 30 November to 11 December.

The hospitality sector has also jumped aboard, with official COP21 partner AccorHotels agreeing to offset the carbon footprint of all overnight stays in the Ile-de-France region - including those at rival hotels - for the duration of the talks.