Google looks to triple renewable capacity through RE100

The projects – a Swedish wind farm and a Chilean solar plant – has led the company to claim that it is the largest non-utility purchaser of renewable energy.

The new projects will power Google’s data centres and brings the company’s renewable energy capacity to 2 gigawatts – equivalent to taking nearly 1 million cars off the road.

A statement on Google’s official blog read: “These long-term contracts range from 10-20 years and provide projects with the financial certainty and scale necessary to build these wind and solar facilities—thus bringing new renewable energy onto the grid in these regions.

“For our part, these contracts not only help minimize the environmental impact of our services—they also make good business sense by ensuring good prices.”

Google has already struck agreements to fund $2.5bn into 22 large-scale renewable energy projects over the last five years, from Germany to Kansas to Kenya. 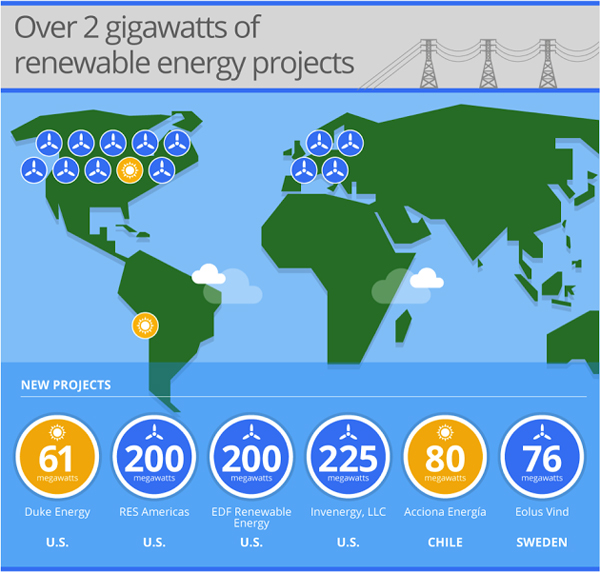 Last week the company announced it would be the first customer of Duke Energy's renewable programme, in a move that will see a North Carolina data centre receive clean energy from a local 61 MW solar project.

The acquisition forms part of the firm’s goal to power 100% of its operations with clean energy by 2025. This goal has been strengthened through joining the RE100 as Google looks to ramp up its clean energy sourcing.

Google is the latest tech giant to join the RE100 campaign after Microsoft and Adobe earlier this week. Microsoft co-founder Bill Gates has also amped up his clean energy pledge by launching The Breakthrough Energy Coalition.

As part of COP21, Google will be co-hosting an event with RE100 on 5 December, where sustainability leaders will discuss ways to reach a renewable future through scaling production and unlocking demand in the market through strengthened policies.

For a recap of what has happened so far in Paris click here.