EXCLUSIVE: Packaging and transportation giant UPS has called on the UK Government to create a 'level playing field' by allowing the transport sector to create a better support system for vehicle electrification and enable more investment into biofuels.

Currently 35 UPS EVs are in operation in London, with plans to double that number already in place

UPS’ director of sustainability for EMEA Peter Harris told edie that the company is using London as an alternative fuel hub for its operational fleet, but has hit roadblocks in the transition due to concerns over electric support assets and the availability of biofuels.

“We started deploying alternative fuel vehicles in the UK just before the Olympics and used bio-methane vehicles when we were undergoing logistics work,” Harris said. “Since that point, we’ve been in constant discussion with Government to create a level playing field so that the transport industry can have fair access to the fuels that other sectors are able to use.

“Obviously it’s not a simple debate and we have made steady progress in the right direction, so we’ll continue to work with Government to find a solution.”

UPS has been at the forefront of exploration into alternative fuel vehicles and is using its ‘Rolling Laboratory’ initiative to test which fuels work best in different regions. While the US has a large, subsidised quantity of natural gas and Hamburg has the infrastructure in place to use electric bicycles, the Rolling Laboratory testing revealed the London can act as an enabler for the EV market, if some hurdles are overcome.

Last year, UPS introduced 125 electric ‘trucks of tomorrow’ into operational circulation across seven US states and in London in the UK. Since the trials, UPS has purchased new facilities in the English capital that can cater for and charge up to 70 EVs.

Harris revealed that 35 UPS EVs are currently in operation in London, with plans to double that number. However, the costly association of having to purchase power supply assets from other companies has ramped up costs- a factor which could drive away investment into EV use in the capital.

“The vehicles are excellent and meet the needs of our duty cycles and are targeted for routes that are compatible with EV range,” Harris said. “However there is a lack of supply from manufacturers so we’ve had to make significant investments into power supply assets and infrastructure which is a quite a roadblock for the scaling of this technology.”

While UPS has taken this issue up with the Government, it has also turned to a conversion programme that can transform diesel-guzzling fleets into zero-emitting delivery vehicles.

UPS currently has a conventional diesel fleet that is designed to last for 15 years. But with the recent Paris Agreement calling for emissions to be cut, UPS has taken steps to convert these fleets, mid-life, into EVS.

“It gets us around the supply issue and also means we can leverage the long life span of our vehicles without the added disadvantage of owning an old diesel truck,” Harris said. “We can actually convert our fleets in a more cost-effective manner than purchasing a new truck so the ROI has actually improved.”

The ‘Rolling Laboratory’ project forms part of UPS’ plan to have alternative fuel vehicles travel one billion miles by 2017 - a feat that chief sustainability officer Rhonda Clark believes is firmly within reach.

“We’re well on track to hit this goal,” Clark said. “It took us 13 years to drive the first 350 million miles and now we’re driving that many miles a year because we’re growing the fleet.

“The next step will be the transition from having an alternate fuel fleet to having an entire portfolio that runs solely on renewables and we’re starting this transition already through biofuels and a synthetic diesel to address existing fleets.” 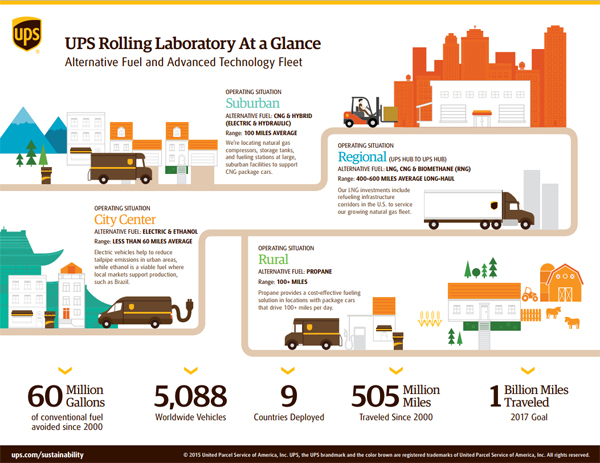 The current alternative fuel UPS fleet is over 6,800-strong and is actually travelling fewer miles than previously due to UPS’ driver optimisation software system, ORION, which takes big data collected by UPS to optimise the routes that the drivers deliver to.

This route optimisation, combined with the company’s Access Point – a delivery option that allows consumers to travel to convenient locations to pick up deliveries that they are at risk of missing – has seen mileage at UPS reduced by seven miles per driver per day, serving to highlight the company’s ethos that the ‘most efficient mile, is the mile you don’t drive’.

Clark revealed that the biggest challenge in embedding the ORION technology  has been getting the drivers on board. “When we told our drivers, who had been using their experiences and brains to get them to and from destinations, that we want them to use this new software optimiser, we had a little bit of friction,” Clark said.

However, through extensive behaviour change training - which included data analysts accompanying drivers on their routes to highlight the sheer volume of data that was being collected - the drivers eventually embraced the technology.

With work progressing to create the most efficient routes for the most efficient fleet, UPS remains weary of placing all of its eggs in one basket. With different countries needing different raw resources and infrastructure, the company continues to develop and innovate on all fronts.

“One thing is for sure:  the future we’re heading towards is one where there is no single solution,” Harris said. “We’re moving away from the days where just petrol and diesel worked for everyone and towards a future that is multi-polar.”