Plant-based food brand Quorn will explore how green hydrogen technology could help to decarbonise its manufacturing operations, as it works towards net-zero operational emissions by 2030. 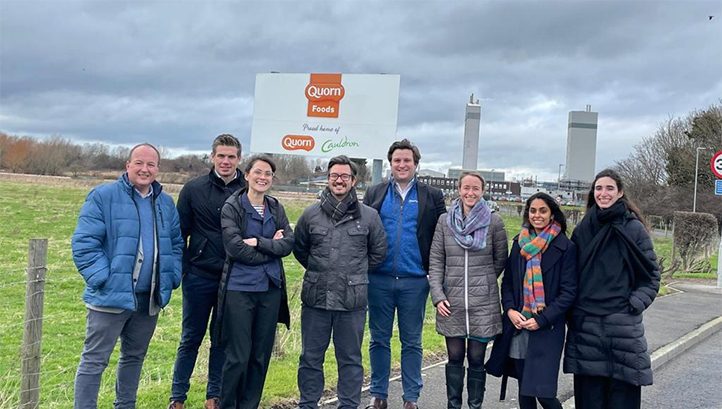 The business has this week announced a partnership with UK-based hydrogen production and services company Protium, to investigate how using dual-fuel boilers for heating processes at Quorn’s factory in Billingham could cut emissions and energy costs.

The boilers will be capable of running using natural gas – as is currently used at the factory – as well as pure hydrogen and hydrogen blends.

Under the partnership, Protium will supply the hydrogen to Quorn’s factory, called Belasis. In time, it is hoping to supply hydrogen generated at a new facility in Teesside, around one mile away. Protium has secured permission to install up to 40MW of electrolyser capacity at this site and is hoping to produce more than nine tonnes of green hydrogen daily once it comes online. Operations are set to begin in 2026.

“To achieve net-zero by 2030, we are considering all options to drive down the carbon intensity of our process heat and electricity consumption,” said Quorn’s chief engineering officer Mark C Taylor.

“The transformational opportunity which green hydrogen potentially presents is one we are taking very seriously. Changing well-established manufacturing processes comes with real challenges, and we are excited about working with Protium and their team of partners. The approach that Protium have taken with us has been highly collaborative; engineering-based; and commercially pragmatic.

“We look forward to completing this phase of the project and to fully understanding the green hydrogen opportunity.”

Quorn’s net-zero operational emissions target forms part of a wider vision for the firm to have a net-positive environmental impact by 2030 and to reach net-zero emissions across the value chain by 2040.

Protium is already contracted to supply green hydrogen to several businesses in the UK with net-zero plans, including Budweiser Brewing Group – the British arm of brewing giant Anheuser-Busch InBev (AB InBev). It is planning to deliver its first green hydrogen to UK businesses in 2024. As well as supplying to manufacturers, it is planning to supply to the aviation and road transport sector. The International Renewable Energy Agency (IRENA) has deemed these applications for low-carbon hydrogen a priority.

It’s been a busy week for hydrogen news in the UK.

In the South East, US-based hydrogen fuel cell firm HyPoint opened a new R&D facility at the Discovery Park in Sandwich, Kent. HyPoint confirmed at the launch event that it is planning to host more than 100 employees at the facility by 2025, and to host 100MW of fuel cell manufacturing capacity within the same timeframe.

The fuel cells produced at the facility will be supplied to aircraft manufacturers. While a commercial-scale passenger plane powered by hydrogen is something of a distant fantasy, trials of smaller aircraft, including electric vertical take-off and landing (eVTOL) aircraft are well underway. HyPoint is also working with Piasecki Aircraft in the hopes of commercially launching helicopters with hydrogen fuel cells in 2025.

Also this week, Octopus Energy’s Hydrogen arm has signed a Memorandum of Understanding with BayWa.r.e. concerning collaboration on the development of green hydrogen production facilities co-located with renewable energy arrays.

The two farms will target the deployment of 30MW of electrolysis capacity under the partnership. The model will involve Octopus Hydrogen installing electrolysers, compression and mobile hydrogen storage alongside new and existing BayWa.r.e. wind and solar farms.

“With electricity being a major factor for green hydrogen production costs, this concept is favourable as it ensures low electricity costs for the electrolyser,” BayWa.r.e. said in a statement.