Gridserve, the company behind the UK's first "electric forecourt", has announced plans to launch a UK-wide network of rapid electric vehicle (EV) charging points in a bid to help combat range anxiety. 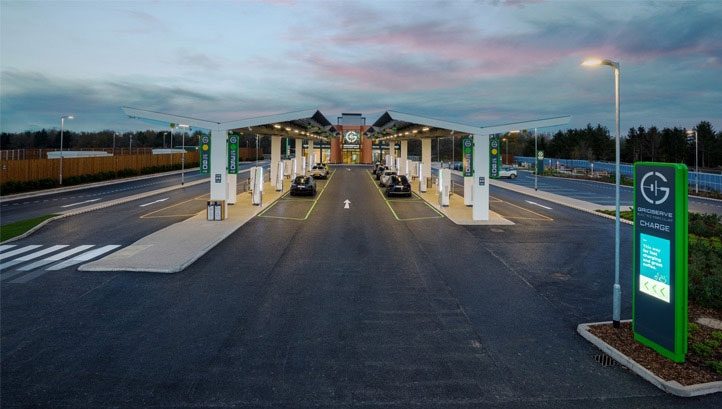 The firm has today (1 July) officially announced its plans for upgrading and extending the ‘Electric Highway’ network of EV infrastructure which it acquired from Ecotricity in June. Overall, Gridserve is planning to invest £100m into the Electric Highway network through the new plans.

Gridserve revealed that it has already upgraded some 80 charging points across 50 locations since the acquisition. It is on track to upgrade chargers at a further 70+ locations by September, bringing the total to 150. Under Ecotricity, the chargers had been installed in proximity to motorways and in Ikea car parks.

In addition to retrofitting these existing locations, the firm, which has received investment from Hitachi Capital and The Rise Fund, is planning at least 50 ‘Electric Hubs’ with ultra-rapid chargers. At least 10 of the 50 Hubs should be completed by the end of 2021. Each location will feature between six and 12 350kW chargers.

Exact locations are yet to be confirmed, but Gridserve has stated that the first Hubs will be accessible from motorway networks in Reading, Thurrock, Exeter and Cornwall. Customers will be charged 30p per kWh of energy; Gridserve estimates that the average electric car could add 200 miles of range for £15.

Gridserve’s founder and chief executive Toddington Harper said the aim of the Electric Highway is to “eliminate charging anxiety and make driving electric an enjoyable, ultra-convenient and stress-free experience”.

“We’re working at a phenomenal pace to roll out cutting-edge charging infrastructure and will continue to move heaven and earth to install new chargers en masse in as many locations as we can, and as quickly as possible.”

All of the new chargers will be powered by 100% solar electricity. Gridserve is investing in grid-scale solar farms to match every kW of charge with equivalent generation, where electricity cannot be directly sent from PV panels to chargers. The firm notably purchased the UK’s first subsidy-free solar farm from developer Anesco last summer and is planning further acquisitions in the future.

The announcement comes after Gridserve opened its first electric forecourt in Braintree, Essex, after delays due to Covid-19. Gridserve unveiled a £1bn programme in March 2019 to construct more than 100 “Electric Forecourts” across the UK. It believes it can deliver on this vision by 2026.

While the UK Government has mandated a ban on the sale of new petrol and diesel cars from 2030, many green groups and automakers have argued that more support for additional charging infrastructure is needed to enable the transition. A recent Policy Exchange briefing calculated that the current rate of EV charger installations would need to increase fivefold through to 2035, from 7,000 points per year to at least 35,000.

In other major EV news this week, Nissan has unveiled plans to transform its flagship Sunderland manufacturing facility into an EV hub, featuring a 9GWh battery ‘Gigafactory’. The Gigafactory will be the UK’s first.

You can read edie’s full coverage of that announcement here.