Blue Flame Syndrome or sometimes it pays to be devious

Going back to my early days with British Gas and to demonstrate that I’m not just (as some recruiters have said) an estates energy manager but can handle processes as well, I thought I’d muse on the Blue Flame Syndrome. Back in Sheffield (Lincoln and Rotherham no need to be racist here) we reburnered a lot of furnaces to modern, energy efficient and controllable systems. 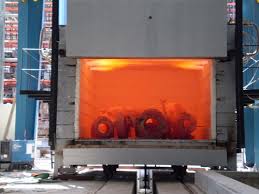 Previously they’d had natural draft systems that could achieve the Rolls-Royce standard of of plus or minus 5C across the hearth if they filled the furnace with thermocouples and spent a day adjusting every burner individually.

The trouble was that whenever we tested one in operation we were lucky to find less than a 50C variation and would find 125% excess air and 5%CO (usually a measure of insufficient air) simultaneously (it is possible despite a chemist’s logic of equlibrium).

We put in kit that would everytime give a less than 10C spread throughout the furnace and reduce gas consumption by over 30% -everyone was happy except the operators who complained that because there was no blue flame in the flue it wasn’t hot enough. No showing them temperature measurements or even that ingots being softened were actually melting would convince them.

Now that flame in the flue is evidence of Carbon Monoxide burning there meaning that too much gas is being added for the available air – not only does that waste gas -it is usually evidence that the furnace is cooling down!

So what did we do? We told them not to touch the controls after we’d spent hours adjusting them with accurate combuston analysis – they interfered. We locked the controls, glued them in place, even secured them inside a cabinet – they still fiddled. Finally we had an idea.

We installed a set of unlocked, highly visible and accessible controls next to the burner. Trouble was they’d had their working parts removed and the real control train was quietly tucked away on the roof of the furnace (we’d put it in while the operators weren’t around).

Finally everyone was happy – the operators could fiddle to their hearts content (they still couldn’t obtain a blue flame in the flue though) and our carefully adjusted burners kept their settings. Most memorable moment was when one of the operators nudged me “I had to give it a little tweak but it’s fine now” little did he know!