COP26 will go ahead in person, Alok Sharma confirms

COP26 President Alok Sharma has confirmed that the Government is planning to host the conference in-person rather than on Zoom, stating that face-to-face meeting is important to deliver "an inclusive summit". 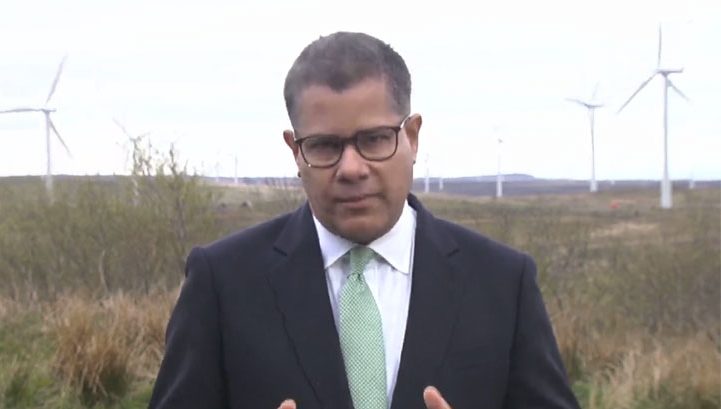 Sharma, who had served as Energy Minister before becoming COP26 President on a full-time basis, made the announcement at a speech delivered from Scotland’s Whitelee wind farm this morning (14 May).

After alluding to “meeting at the negotiating table”, he said: “I have always championed a physical COP. The desire for one is what I have been hearing loud and clear from governments and communities around the world. So, we are planning for a physical summit.

“We are ensuring that the safety of delegates and the local community will be paramount. Along with our colleagues at the Scottish Government, Glasgow City Council, public health bodies and the UN, we are exploring every possible Covid-19 security measure – that includes testing, vaccines and other measures – to keep COP26 Covid-19.”

Covid-19 measures will be publicly shared “in due course”, Sharma added.

Sharma alluded to how an in-person format could support “an inclusive summit, where all voices are heard, including the voices of developing countries, women, young people and indigenous peoples”. This is despite the fact that the UK Government only added women to its own COP26 team following public criticism.

“Historically marginalised communities are some of the most impacted by climate change; they also hold some of the most effective solutions to tackling it,” Sharma elaborated. “For me, it is vital that developing countries are able to sit at the same table – face-to-face – with the larger countries and the big emitters.”

The announcement follows months of speculation around whether COP26 would need to be hosted online or postponed once more, largely due to the developing Covid-19 situation in several of the nations due to take part in the negotiations, including India.

Ministers at BEIS and Defra including Kwasi Kwarteng and George Eustice have repeatedly stated that the Government would prefer a face-to-face meeting – at least for the key negotiations – and that there are no plans for a second postponement. Prime Minister Boris Johnson has reportedly stated that agreements consistent with 1.5C will not be possible unless nations with stricter climate targets can “look China in the eyes”.

Tory MP Philip Dunne, chair of the Environmental Audit Committee, said the decision to go for an in person summit is “very welcome news”.

Dunne said: “Following the UK’s success in our own vaccination programme, we are in a good position to help source vaccinations for accredited delegations from countries where there is not the same speedy roll-out of vaccinations. I hope the Government and the UN will give this serious thought, either through the existing COVAX scheme or other appropriate channels.

“A physical conference, even if this requires fewer delegates than normal, should make for a more productive conference. The climate crisis is a global crisis, and it is imperative that leaders from around the world can come together to set new, binding climate targets. For those unable to travel due to the pandemic, I would expect to see some virtual participation so that all countries can play a role in shaping the global response to tackle climate change.”

Opinion across the green economy on how the conference should be hosted has been mixed. The UN itself has insisted that the talks must go ahead in November – physically or virtually – to “advance the extensive work that needs to be addressed”.

But thought leaders including Greta Thunberg and Yvo de Boer have argued that, if the conference cannot go ahead in person – or if a ‘hybrid’ format is taken – further delays could help deliver outcomes that are more ambitious and more broadly supported.

Sharma insisted that his team are striving to deliver a “balanced agreement”.

Sharma’s key message for today’s speech was to other nations, urging them to “keep 1.5C alive” by phasing out coal power generation and by taking part in pre-conference events over the next six months. He described existing renewable energy arrays as “a glimpse into our future”.

He also urged individuals to remember that everyone has a role to play in the drive to reduce emissions and build in climate resilience.

Detailed updates about each of the UK COP26 unit’s themes for the conference were also provided. These are namely clean energy, clean transport, nature-based solutions, climate finance and adaptation and resilience. On the latter, Sharma said the conference will seek to develop shared, numerical, time-bound goals for adaptation. A short-term vision will be improving protections for one billion people globally by 2025.

Overall, Sharma said the conference will deliver “wide-ranging” negotiations, covering topics including the Paris Agreement ‘rulebook’, international carbon markets and trading, and climate risk reporting for cities and businesses. Discussions over the coming months will be essential, he said, to agreeing “common rules” with a “common timeframe”.

Readers are encouraged to attend edie’s flagship Countdown to COP26 event, which is uniting hundreds of business leaders in preparation for the UN conference.

The virtual event is taking place on Thursday 20 May, with the aim of informing and inspiring businesses to seize the opportunity of the crucial UN climate talks which are being held in Glasgow this November.

One of the keynote speakers for the event is notably Green Finance Institute chair Sir Roger Gifford, who will be speaking to the importance of ensuring a ‘just’ transition to net-zero. Other keynote speakers include The UK Cabinet Office’s director of partnerships and engagement Matt Toombs,  WBCSD director Claire O’Neill and O2’s head of corporate responsibility and sustainability Tracey Herald.

For a full agenda, and to register, click here.