The UK COP26 unit's director of partnerships and engagement, Matt Toombs, used his keynote speech at edie's flagship Countdown to COP26 event to outline exactly how businesses can properly prepare for the crucial talks. 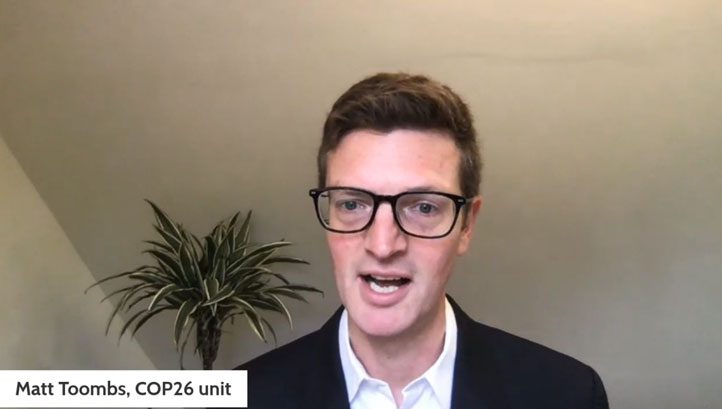 Toombs outlined how business can contribute to each COP26 'goal'

Speaking at the virtual event on Thursday morning (20 May), Toombs outlined the UK COP26 unit’s four ‘goals’ for the summit – the desired outcomes from preparations for, and key negotiations at, the summit – and explained how businesses can get involved in each case. The goals were initially unveiled by COP26 president Alok Sharma in a speech last week, in which he implored all nations to “keep 1.5C alive” and in which he confirmed that the UK is pressing ahead with a face-to-face event.

Toombs said the four goals are “based very strongly on the Paris Agreement” with the aim of showing that 1.5C is “still achievable”. Indeed, the primary goal is to mobilise global commitments to net-zero by 2050 at the latest. The UK Government will specifically encourage other nations to accelerate the coal phase-out, tackle deforestation, accelerate the transition to electric transport and scale up investment in renewable electricity and heat.

“When we started this presidency, about 30% of the world was covered by net-zero targets,” Toombs said. “We’re now at a point where almost 70% is covered, in terms of GDP. That’s huge progress in terms of the framework we’re operating within, but the speed that we need to move at is still the real challenge.”

The second and third goals cover adaptation to protect communities and habitats, and mobilising at least $100bn of global climate finance per year. The second goal covers early warning systems, improved infrastructure and greater support for nature-based solutions – in which Toombs said that indigenous peoples would be placed at the “front and centre” of plans.

The fourth goal centres around collaboration on delivering the prior three. While this is partly about collaboration at the negotiating table, Toombs spoke of the importance of businesses collaborating with each other, cities, regions, nations, academia and civil society to ensure that work towards sweeping long-term climate goals is done in the short and mid-term.

“Businesses have an absolutely crucial role in delivering all four of these goals, because the scale of transformation needed in the next decade involves a full change across the economy, and, because, to make the bold commitments to achieve [1.5C], governments need to know that they are going to be welcomed – not resisted – by business,” Toombs said.

Businesses can specifically contribute to goal one by joining the Race to Zero campaign, Toombs said. This UNFCCC campaign now represents commitments of more than 2,360 end-user businesses and 163 investors. It was recently revealed that one-third of FTSE100 firms are now signed up. Membership requires long-term net-zero targets backed up with “science-based, credible” interim goals and short-term pledges on decarbonising power and transport.

Building on Toombs’ comments, Bridget Jackson, business engagement lead at the High-Level Climate Champions, said Race to Zero membership is a strong way to prevent “net-zero washing”, as it sets “time-bound and ratcheting processes for businesses” and includes “processes and applications around pledging and planning to get to net-zero and proceeding and take action”.

The ‘Race to Resilience’ campaign, running in tandem with Race to Zero, was flagged by Toombs as a way for businesses to align with goal two. It is targeting improved resilience for four billion people globally this decade, urging greater collaboration between stakeholders including cities, finance and businesses.

On goal three, Toombs urged businesses to consider how public and private finance intersect and how both can be scaled. He highlighted how businesses can work with financial institutions with which they are involved to press for aligned ambitions and actions. Notably, the Race to Zero already covers $10trn of combined revenue.

As for goal four, Toombs said: “Business has a really critical role as advocates for the positive vision of a low-carbon society – and that is with peers, customers, the supply chain and governments across the world.