Europe's deployment of solar PV in 2012 fell 27% but countries such as India, Australia and Korea are lifting the global industry into the next stage of capacity.

Europe's solar deployment in 2012 dropped to 17 gigawatts (GW) from a record 23GW in 2011, according to new industry figures. It was the first time the market for PV in Europe decreased since 2006, dropping well below the record achieved in 2011.

Significant decreases in Italy and France have been to blame for Europe's decline, according to preliminary figures released by the European Photovoltaic Industry Association (EPIA). However, Europe still continues to contribute a significant capacity to the global figure.

Germany continues to lead Europe with 7.6GW deployed in 2012, while Italy recorded 3.3GW, a massive drop from the 9.3GW in 2011. France added a total of 1.2GW to Europe's capacity, but is still performing well below its "theoretical potential", says the EPIA.

Behind the top three in Europe, the UK installed 1.1GW in 2012 for the first time, up from 875MW in 2011. The Government has announced its commitment to solar recently in the UK highlighting it as a key technology in its Renewables Roadmap.

Speaking to edie, a spokesperson for the Solar Trade Association (STA) said: "There is every sign that solar has a bright future in the UK. The early years of this decade have seen a lot of policy instability across Europe, compounded by the financial downturn.

"But in the UK, solar enjoys both public and political support - it always comes out top choice in DECC's Public Attitudes Tracker and it is of course now listed as a key technology in DECC's Renewables Roadmap. We have relative stability in the support mechanisms and the dramatic cost reductions are putting the technology within reach of more and more people."

However, STA said the Government's finalisation of the Energy Bill will be a deciding factor in the industry's growth prospects.

"To maintain the growth in utility-scale solar, the key issue now is to address route-to-market issue for independent generators in the Energy Bill. For this reason the Solar Trade Association is backing the Green Power Auction Market, which Government is now considering and which provides wider benefits for solar power, for example, better clarity on the true costs of grid balancing," added STA. 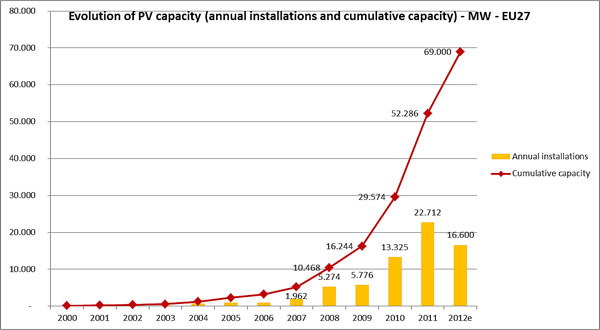 Despite the fall in Europe, 2012 showed an important shift towards a more global PV market, with those outside of the continent recording substantial growth. For the first time, the cumulative global installed PV capacity passed the 100GW mark, achieving just over 101GW.

According to the EPIA's figures, the 101GW capacity produces as much electricity as 16 coal power plants or nuclear reactors of 1 GW and, each year, saves 53 million tons of CO2. The non-European PV market grew much faster than it has in previous years, with at least 13GW installed in 2012.

"The top three non-European markets were China, the US and Japan, which all accounted for more than 8.5GW of newly installed capacity in 2012," it said.

However, the EPIA questioned the real size of China's market, which varies according to sources between 3.5GW and 4.5GW.

"Several other non-European markets performed well, including India, Australia, and Korea and to a certain extent Canada, Israel and Thailand. Very large projects have been announced in Chile, South Africa and several other markets, but their realisation will take longer than expected," it said.

The final results of the figures will be published in May 2013 in the EPIA's "Global Market Outlook for Photovoltaics 2013-2017".


© Faversham House Group Ltd 2013. edie news articles may be copied or forwarded for individual use only. No other reproduction or distribution is permitted without prior written consent.