These tips were taken from discussions at the 2014 Energy Management Forum, which showcased existing and emerging technologies that can improve energy management performance and explored the latest energy obligations facing business.

Npower, which supplies 24% of the industrial and commercial energy in the UK, was one of the sponsors of this year's Forum. Tony Slade, npower's head of I&E energy solutions, gave a broad presentation businesses, explaining that they need to know exactly where they stand in terms of energy consumption before setting off on any journeys to reduce it.

"Start with the basics - you need to spend the time, money and effort establishing exactly where you are first," said Slade. "Lighting, pumping, heating, cooling, transport - all of these things need to be fully understood in terms of current consumption and then you know the size of the prize.

"Any business, no matter how large or small, needs to start with the most basic thing of all - switch it off. If you save a kilowatt, you save it for ever. If you get a cheaper kilowatt, you've only saved that money until the next price rise, and prices will keep going up.

"The cheapest energy you have is the energy you don't use, so switch it off. Everybody says they've done it, but if you stand on top of the towers in Canary Wharf at 3am, the lights are on and there's nobody home.

"Be as smart as you can and then look at how you can reduce your carbon. But before you start, find out exactly where you are and plan from there."

2) Get in BED with your Big Energy Data

Businesses with diverse corporate estates could save up to 10% of their energy costs by simply embracing 'big energy data' and using technology to make various energy management systems work together.

That was the view of Richard Funnell, senior manager for Wipro EcoEnergy EMEA - another of the Forum's sponsers - who told delegates that they should not be afraid of technology and data; but instead be making the most of both to ensure higher energy efficiency and lower operational costs. 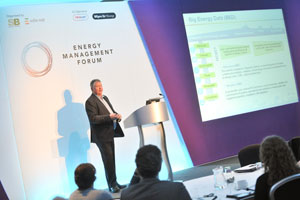 "Big data is here to stay," said Funnell. "Many businesses have months and months of valuable data sitting on their PC that they do nothing with. If you take that data and understand what it means, you can save 10% of your energy-related operating costs.

"Heating, cooling, vent fans, access, security, telephones, lifts - the data you collect from the energy consumption of all of these things should be reporting together and giving you a true picture of what's going on in your building.

"That technology is certainly here now and cloud technology allows you to do that very easily.

"It also gives you greater compliance and an extended life cycle on each of those products. When collected together, the energy management data is richer - and it can be manipulated into reports that mean something to lots of significant people."

3) ESOS is a good thing for business

The recent launch of the Energy Savings Opportunity Scheme (ESOS) requires all companies in the UK to undertake mandatory energy-efficiency assessments over the next 18 months.

Andy Cowdrill, policy advisor for the Department of Energy and Climate Change (Decc), explained to delegates at the Forum that the various efficiencies identified by these Esos assessments could save businesses £1.9bn.

There have been concerns that companies taking a 'make do' approach to the legislation will incur the scheme costs - estimated to average £10,000-17,000 for each business audit cycle - without any financial gain. But it quickly became apparent at the Forum that the potential benefits will undoubtedly offset those concerns.

"ESOS is fantastic," said the Energy Managers Association's (EMA) CEO Lord Redesdale, who believes Esos is going to pump billions of pounds' worth of investment in retrofit across the country.

The EMA, which represents energy managers, is outside of the scope of Esos as the organisation doesn't have over 250 employees. But Lore Redesdale believes it will give qualifying businesses the push that they need to become more energy efficient.

"The age of subsidy is dead and that's why Esos is fantastic," he said. "It basically gives large companies a wish list of all the things they want to do to reduce their energy costs and they can then take it forward. And it actually forces them to do that - I actually wish it went further." Esos - is your business ready?

4) LED lighting is a bright idea

Richard Laxton is the global sustainability manager of Arla Foods, a major dairy producer that processes around three-and-a-half million litres of milk in the UK every year - around 30MW of power is needed to process that milk. 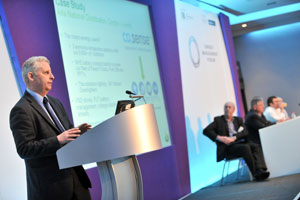 Speaking at the Forum, Laxton explained how Arla Foods has invested in LED lighting to reduce its energy consumption; as part of the group's strategy to reduce absolute carbon by 34% by 2020 and cut down on energy by 3% year-on-year - all in the face of significant growth.

"We have massive lighting requirements and the lights are high intensity and high lux," said Laxton. At our national distribution centre in Leeds, around 15% of our costs were energy. Before we made the change, we had 381 sodium downlighters that often needed replacing.

"The benefits of installing LED lighting were just incredible. We went from using 22,000kWh per week in terms of lighting to just 5.5kWh per week. Financially, we saved £80-90,000 a year. The biggest saving was the heat load - whilst we reduced the electricity demand by 80%, the major saving we made was actually on refridgeration.

"We were saving about 12% in our energy consumption in the first year alone - the payback was around 15 months. Since 2012, we've reached 15% savings on our energy. And the effect on staff in terms of engagement has also been great.

"From my perspective, the question for all businesses is 'why wouldn't you invest in LED?'"

'Implementing a smart metering strategy to enable significant energy, cost and carbon savings' was the title of the final presentation of the day made by Guy Lee-Potter, the Co-operative Group's group retail estates energy manager.

Co-op has over 5,000 sites nationwide, spread including food retail, pharmacy, banking and head office. The group has taken heed of point three on this list and began focusing on energy data, with smart meters implemented across virtually all of its estate.

Lee-Potter explained it was actually staff engagement that held the key to capitalising on all of the data received from the smart meters.

"Implementing smart metres doesn't save energy - it's what you actually do with the data you get that saves it," he said. "That's where engaging with staff is crucial.

"Whatever the energy-efficient measure you're trying to implement, you need to first make sure that your people understand what you're trying to do. Never underestimate how easy something can happen if you've involved the right people at the right time.

"If you've got people that really understand what you're trying to do, it will smooth the waters at senior level. Education at site level is also important - communicate, educate and ultimately make sure everyone is on-board with why you're trying to do something.

"People generally do actually want to help. You just need to spend some real time thinking of how best to engage with them. Sometimes, staff don't realise the simple energy saving techniques they can be doing themselves, so education about that is key.

@edieEnergy great to hear corporates leading on sustainability. Lots to do, but a big fan of big ambition. #energyforum

Based on the data it now receives from the smart meters, Co-op is launching a nationwide campaign to engage with its people. The firm is giving every region the chance to compete with each other; to reduce their energy consumption, with a reward given to the best-performing region - that's all based on the data it has from smart metres.

"We couldn't believe just how bought-in some of our staff members have been with our energy saving initiatives," added Lee-Potter. "It's our initial and continual engagement with those staff members that allows for that."

Got any tips of your own? Tweet us @edie or leave a comment below to let us know your thoughts.

The third annual Energy Management Forum, organised by edie and Sustainable Business, took place at the Holiday Inn Birmingham City Centre on 14 May 2014. For more information on the event, click here.