With deadline day for entry to the 2015 Sustainability Leaders Awards fast approaching, this new series of articles profiles the businesses, people and initiatives that won over last year's judges. And where better to start than 2014 hat-trick winner B&Q?

In November 2014, a glittering awards ceremony, hosted by TV comedian and environmentalist Alistair McGowan, saw74 shortlisted finalists whittled down to winners in 14 categories ranging from Carbon Management to Stakeholder Engagement and Sustainability Reporting.

The esteemed panel of judges - which included the Carbon Trust's chief operating officer Michael Rea, BRE's chief executive Peter Bonfield and Forum for the Future's chief executive Sally Uren - praised B&Q for having "sustainability wrapped around the core of its strategy" and for its overall willingness to transform the green credentials of the entire home improvement industry.

So, here's a closer look at the specific initiatives that won those three awards.

Carbon management - and, by extension, carbon reduction - is a core metric in the sustainability function. But B&Q set an entirely new standard with its One Planet Home programme, which outlined a commitment to reduce the business’s absolute carbon footprint by 90% by 2023 through efficiency and innovation, and not by offsetting. 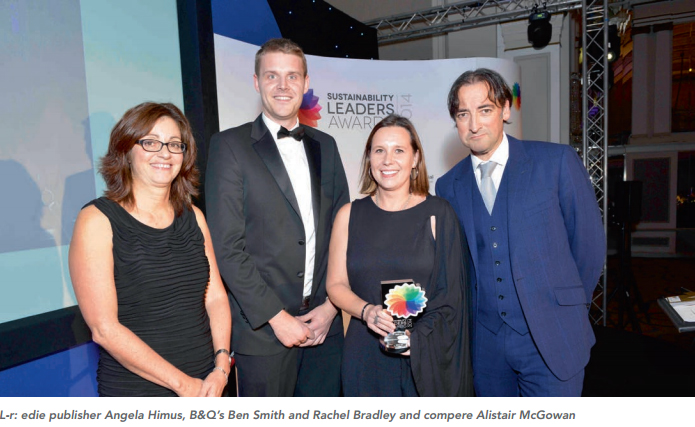 Launched in 2008, One Planet Home breaks from the business norm when it comes to target setting. Rather than base carbon targets on estimated savings connected to planned initiatives or activity, B&Q set targets based on what needed to change to avert climate change disaster – a bar setting 90% reduction by 2023.

And, through a combination of embedding sustainability throughout the business and encouraging consumer take up, the business has already exceeded its 20% interim reduction by 10%, delivering a 30% absolute CO2 reduction across store energy, transport and waste. And that’s despite growing the store estate by 10% in the same period.

This impressive saving has been delivered by a mixture of technology improvements, behaviour change and a long-term commitment to renewable energy capacity. Employees have been engaged at all levels, from the boardroom down to in-store 'Eco Heros'. Accountability, however, is key to the strategy, and two team managers are specifically tasked with reducing store and fleet carbon, including annual targets agreed with the CSR team and approved by departmental directors.

Initiatives include a £2.1m investment in LED lighting trials, resulting in a new LED technology being brought to market. In store, an LED trial in the Caerphilly store saw energy use reduced by 52%, prompting a nationwide roll-out to more than 300 stores over an eight-year period. This initiative alone is set to save more than 60,000tCO2 per annum, reducing B&Q’s scope 1 and 2 footprint by 47% compared with 2006.

Investment in 500 double-deck lorry trailers, which have 35% more capacity, and 50 dual-fuel trucks which run on 60% landfill-derived biomethane has totalled more than £5m to date. This, coupled with better route planning and the use of rail to transport 27% of imported containers, has driven a 31% reduction in carbon emissions from transport since 2006.

Electricity consumption has been reduced by 19% and gas consumption by 47% compared with former office facilities, a 250tCO2 saving per annum. But it isn’t just its own behaviours that B&Q is attempting to change, its consumer behaviour as well. B&Q is making sustainable products mainstream, introducing more than 4,000 eco products from recycled paint to solar panels under the One Planet Home initiative. It has also calculated a full scope 3 carbon footprint, which informs product development.

By making range review decisions with sustainability as a key criterion – A-rated is the minimum standard on appliances B&Q stocks for example – it’s driving greener decisions at the point of purchase. And the learning is being used to inform and extend its parent company’s own sustainability strategy. In fact, it directly influenced the development of Kingfisher’s Net Positive approach, launched in 2012.

Leadership begets leadership and as Net Positive pushes the boundaries and challenges the definition of sustainable business, B&Q was undoubtedly worthy of the Carbon Management award.

Launched in April 2014, B&Q’s easyGrow is a fantastic example of how rethinking a retail staple can drive environmental improvements, drive change and also drive sales.

B&Q is the largest garden retailer in the UK and sells about 140 million bedding plants each year. Historically, these plants would have been packaged in non-recyclable polystyrene trays using peat-based growing media. B&Q had trialled different forms of packaging for years and had ‘tinkered’ with lower peat formulations. However, no viable alternative had been found.

So, to accelerate change, B&Q held a summit, inviting all its growers and buyers together and laying down a challenge – to find a way of eliminating both polystyrene and peat from B&Q bedding plants. The answer was easyGrow and its ‘Teabag Technology’.

Each individual packaging unit consists of a ‘teabag’ made of corn starch (renewable and fully compostable) which protects the plant’s roots and makes them easy to handle. Each teabag is filled with coir, made from coconut husks rather than peat, which is sourced from Sri Lanka and independently audited to ensure high ethical standards.  In fact it has created 750 local jobs and B&Q is funding a school there.

The plants then sit in a tray made from 100% recycled content, which is recyclable and designed to be reused as a growing tray or propagator. The innovation, says B&Q, comes not from the materials that have been used, but in using them together, and in the scalability of the scheme. It has already identified that a wide range of plants could be sold in easyGrow packaging and having successfully replaced peat with coir, is testing whether greater levels of coir could help the chain to reduce the peat content in its bagged growing media as well.

The results are game changing. Peat use has been reduced by up to 99% across the 140 million bedding plants, and 22,500 cubic metres of polystyrene has been removed from the supply chain – that’s enough to reach from Land’s End to John O’Groats, or, put another way, enough to fill 87,200 wheelie bins. Packaging volume has been reduced by 50%, driving a 30% increase in logistical efficiency and – making the most compelling business case of all – sales were up 35% year-on-year resulting in an additional £1m in sales.

And for the customer, they are investing in a more responsible, more sustainable product. Far from being a ‘green’ compromise, the technology makes for an improved product that is easier to use and delivers better results. As each plant is encased in the corn starch teabag, which is biodegradable, the plant can be placed direct into the ground, teabag and all. The self-contained plants also reduce wastage in store as, if one or more plants in a tray get damaged or are unfit for sale, plants from two or more trays can be amalgamated into one.

The initiative has already won internal awards, with the buyer who led the development of easyGrow being named ‘Buyer of the Year’ by B&Q parent Kingfisher. The hope, says the company, is that it will encourage other buyers to engage with the supply chain to find products that are “better for business, people and the planet” – a perfect summation of what the Sustainability Leaders Awards are all about.

Tapping into the strength of the supply chain has enabled this year’s winner B&Q to set new standards in horticulture product sustainability for its customers. Highlights include developing a new technology to replace peat and polystyrene from bedding plants with natural fibres, reducing associated packaging volume by 50% and gathering better data on pesticide use to help minimise chemical impacts. 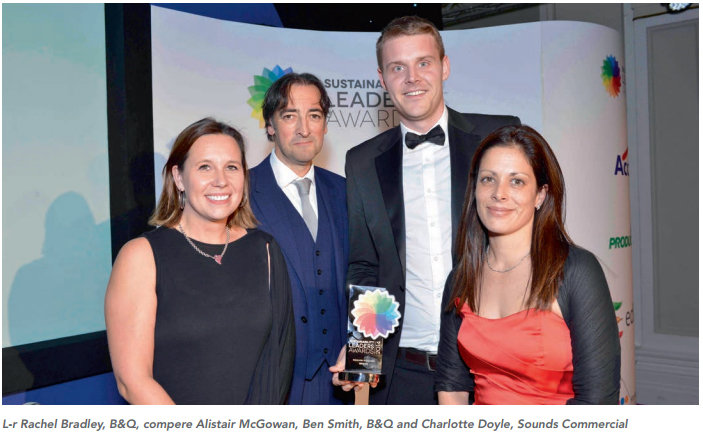 Last year, the retailer held a Grower’s Summit, where it brought together its internal CSR team as well as buyers from its horticulture commercial team and their suppliers. Two big challenges were laid down during the exercise: How is B&Q going to eliminate peat and polystyrene from the bedding plants (some 140 million products) it sells every year? What can it do to reduce the impacts of pesticide use on Britain’s bees?

A series of workshops were held to explore solutions – the collaborative nature of the discussions helped fast-track solutions. This resulted in one of B&Q’s main bedding plant suppliers devising a solution based on corn starch and coir (a natural fibre extracted from coconut husks) products to remove peat and polystyrene from bedding plants – easyGrow with Teabag Technology.

Launched earlier this year, the technology has enabled B&Q to replace 95-99% of peat with coir encased in a biodegradable ‘teabag’ made from corn starch, a renewable resource that is compostable. The plants sit in a tray made from 100% recycled content and are recyclable. So far this initiative has helped drive an extra £1m in sales with summer bedding plant pack sales up 35% year-on-year. The innovation is also cutting costs and carbon footprint – it has reduced packaging volume by 50%, and enabled a 30% improvement in logistical efficiency.

Meanwhile on pesticide use, B&Q claims to have been the first retailer in the UK to remove pesticides containing imidacloprid from its shelves, prompting others in the market to follow suit. It is now working with its supply chain to understand better where neonicitinoids are used and where this practice can be stopped. On a consumer level, it is promoting a range of bee-friendly plants.

Looking ahead, the retailer is seeking to work with more of its suppliers to apply the easyGrow concept across other product lines. It is also researching how coir could be used as a replacement for peat in bagged growing media, where peat use has so far has been reduced by 60%.

On a wider level, in conjunction with environmental campaign group Friends of the Earth, B&Q has devised a smartphone ‘Bee App’ to enable people to identify bees and log sightings while out and about, as part of its drive to help reverse the decline in bee populations in recent years. According to the company, the research and development that resulted from the Grower’s summit was substantial, and far greater than any work previously undertaken by its horticulture suppliers and buyers to solve environmental challenges.

The buyer who led on the development of the easyGrow solution was awarded the prize of ‘Buyer of the Year’ by parent company Kingfisher Group – B&Q hopes this will inspire other managers within its commercial teams to engage with their suppliers on the development of more sustainable products.

By being able to develop more sustainable products through making some material changes, but not significantly affecting the production processes, B&Q has shown it is possible to deliver quick and cost-effective solutions that are widely replicable.