The coal announcement makes the UK the first major economy to set a clear date to phase out coal.

The UK's energy policy "reset" has sparked a chain reaction across the renewable energy and sustainability industry, with major consequences expected across several sectors.

Here at the key points from the speech and the subsequent reactions from the industry heavyweights. In short, this is everything YOU need to know...

Rudd said "we need to build a new energy infrastructure, fit for the 21st century". Specifically, the Government will be launching a consultation on the coal phase out early next year.

The consultation document will then set out the proposals to close unabated coal-fired power stations by 2025, and restrict use from 2023. But nothing is set in stone at this point in time.

2) The UK's coal use is already plummeting...

The UK’s use of coal in electricity generation is already plummeting. Total coal imports decreased by 52% year-on-year to 5.2 million tonnes in the second quarter of 2015. 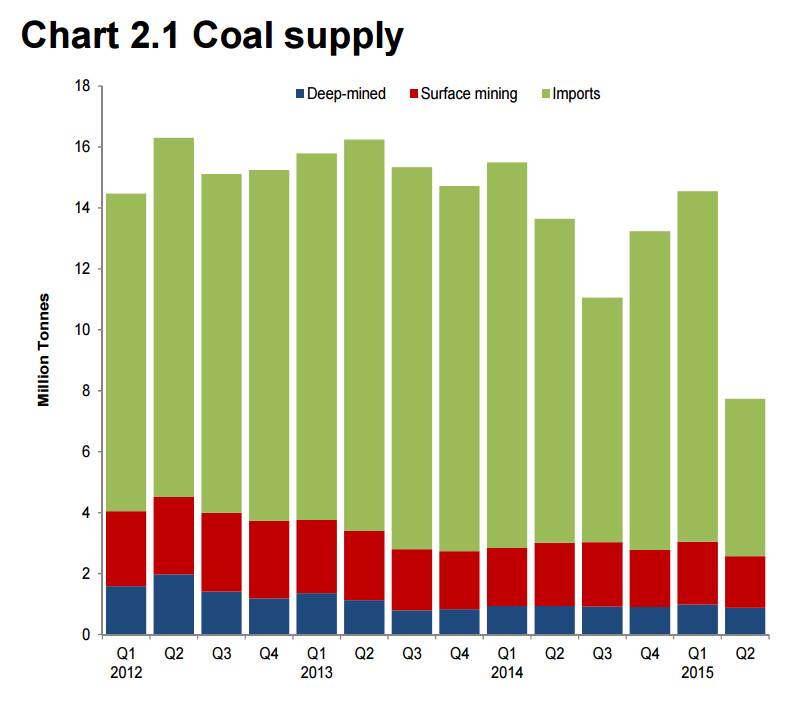 However, much of that reduction is because the UK’s overall  electricity consumption has also fallen. As Rudd pointed out, a higher proportion of our electricity came from coal in 2014 than in 1999

3) Rudd has sent out a powerful message

The announcement has made the UK the first major economy to set a clear date to phase out coal.

Among those welcoming the move, former US Vice President Al Gore said: “With this announcement, the UK is demonstrating the type of leadership that nations around the world must take in order to craft a successful agreement in Paris and solve the climate crisis.

“I am hopeful that others will follow suit as we repower the global economy with the clean energy we need for a sustainable future.”

Gore has previously been very critical of the Conservative Government's energy policy. 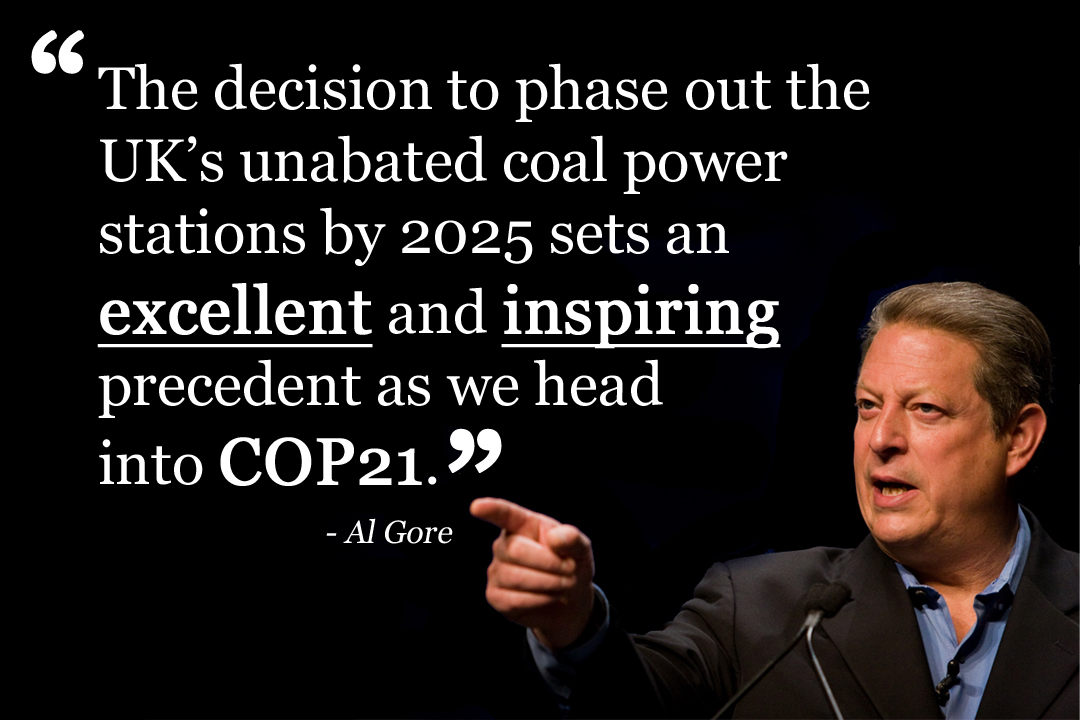 4) Gas is expected to pick up the slack

In her speech, Rudd gave her explicit backing to new gas generation. She said: "We need to give a clear signal to people who are in the market for building gas stations that coal will no longer crowd out new gas.

“Gas is central to our energy secure future. In the next 10 years it’s imperative that we get new gas-fired power stations built.”

Burning gas emits around half as much carbon as coal and is considered by some to be a 'bridging fuel', as countries transition towards renewables.

Only one large gas-fired plant is currently under construction in the UK. Another, which secured a subsidy last year, is reportedly struggling to find investors.

According to Bloomberg New Energy Finance, the cost of combined cycle gas generation in the UKis $115/MWh once carbon costs are taken into account – the same as coal and higher than the average $85/MWh for onshore wind.

Bruce Davis, the managing director of sustainable investment site Abundance, added: “Rudd’s revival of the 'dash for gas' suggests she is a fan of the 1990's. 'Don't look back in anger' will be an appropriate refrain to her backbenchers when their constituents face red energy bills in 2020.”

6) Shale is still seemingly a priority

Despite opinion polls which suggest the UK public would prefer to see resources allocated to renewables, Rudd confirmed that shale gas would play an important part in the transition to gas generation.

Rudd: UK is oil + gas global leader. We should build on that expertise and exploit shale gas safely #energy

Rudd: gas could be 75% imported by 2030. Need to diversify supply and secure shale gas.

She said opponents ‘misread the science’ about nuclear power, and that the technology could provide up to 30% of the UK’s low carbon electricity through the 2030s and create 30,000 new jobs.

The recent Hinkley announcement prompted outcry around the renewables and sustainability industry, as various trade groups were baffled by the subsidy support being handed out to nuclear at a time when green subsidies are being cut to the bone.

Rudd called for a shift away from the energy policy of the past eight years, whereby “success was measured by how fast renewable energy could be installed, not by how cost-effective our carbon cuts were or what the impact on energy security would be".

Considering the energy trilemma of security, equality and sustainability, Rudd seemed willing to deprioritise affordability in favour of the latter two options.

She said the need to decarbonise had to be balanced with the need to keep bills as low as possible and added: “Energy security has to be the first priority. It is fundamental to the health of our economy and the lives of our people”.

9) Continued support for offshore wind, but “no blank cheques”

Rudd confirmed there would be three auctions for offshore wind subsidies by the end of this Parliament, “if - and only if - the Government’s conditions on cost reduction are met.”

The first of these auctions could be held as soon as 2016, but the cost target that Rudd mentioned is expected to be £100/MWh. Current costs are around £110/MWH.

Green Alliance director Matthew Spencer welcomed the move, commenting: “The cost of offshore wind is falling, but Amber Rudd has been wise to make future support conditional on the industry bringing costs down further.

“Future conditional support protects the consumer, whilst giving the industry greater confidence to invest in the supply chain, which is crucial to growing UK content and lowering costs.”

Green Alliance said the subsidy rate for offshore wind electricity has fallen by 52% in the past three years, while the technology has grown from 1% to 10% of the UK electricity supply. The think-tank said the technology is likely hit an existing target the government has set for it of £100/MWh by 2020, which will be a cost reduction of 30-40%.

.@AmberRudd_MP: Gov will support #offshorewind in this Parliament but conditional on accelerated cost reductions #climate @DECCgovuk

Paul Barwell, the CEO of the Solar Trade Association (STA) added: “Solar has grown from providing 0% to the current 2% of UK electricity supply within just the last five years, and could get to 5% by 2020 with very little extra support. There is plenty of room to include solar alongside gas and nuclear in the coal phase out.

"No industry could be more fully behind the 'consumer-led' and 'competition focused' power system the Secretary of state wants to see than solar power. Solar empowers consumers more than any other technology and transforms competition in the electricity sector."

And the REA’s head of policy and external affairs, James Court said: “Amber Rudd has yet again stated she wants to de-carbonise in the most cost-effective way, but her actions through supporting higher cost technologies, such as nuclear, at the expense of more cost-effective renewables such as onshore wind, solar and biomass, means consumers will be paying more.

“This speech gives no comfort to companies and investors wanting to bring down costs for renewable technologies, and leaves the whole renewable heat industry in limbo as they still wait to find out if RHI has a future."

Rudd said the Government remains committed to meeting the UK’s 2050 target, and reaching an ambitious deal in Paris.

She said: “Climate change is a global problem, not a local one. Action by one state will not solve the problem. It’s what we do together that counts. And that is why achieving a global deal in Paris next month is so important.

“But climate change will not be solved by a group of over-tired politicians and negotiators in a Conference centre. It will take action by businesses, civil society, cities, regions and countries."

Rudd said: “We now have an electricity system where no form of power generation, not even gas-fired power stations, can be built without government intervention”

Amber Rudd: Lawson model of limited intervention has been wiped away. Government became too involved in energy market.

The idea was actually welcomed by renewables generators, who claim that perverse fossil fuel subsisides are holding the industry back.

The STA's Barwell concluded: “The level playing field the Secretary of State wants to see in energy is very welcome, and if implemented that should mean solar is squarely back in the game. However fossil fuel incentives [2] currently distort the market.”