Simply upgrading a few core components in gaming PCs could save enough energy to stop the construction of 40 500MW power plants, a new study has claimed.

Gaming computers currently represent 2.5% of the global PC base, yet they are responsible for 20% of the energy output

Research from the Berkeley Lab entitled “Taming the energy use of gaming computers” found that gaming PCs could achieve energy savings of more than 75% with simple modifcations.

Head researcher Evan Mills said: “Your average gaming computer is like three refrigerators. When we use a computer to look at our email or tend our Facebook pages, the processor isn’t working hard at all. But when you’re gaming, the processor is screaming. Plus, the power draw at that peak load is much higher and the amount of time spent in that mode is much greater than on a standard PC.”

Gaming computers currently represent 2.5% of the global PC base, yet they are responsible for 20% of the energy output. Mills calculated that typical gaming computers use 1,400 Kwh per year, which is 6 times more output than a standard PC and 10 times more than a gaming console.

As part of the research, five gaming computers were built with progressively more efficient components being incorporated. They followed industry protocols for benchmarking performance alongside measuring energy consumption.

They were able to reduce energy use by 50% without affecting PC performance. By modifying operational settings of the PC, the total savings amounted to more than 75%. 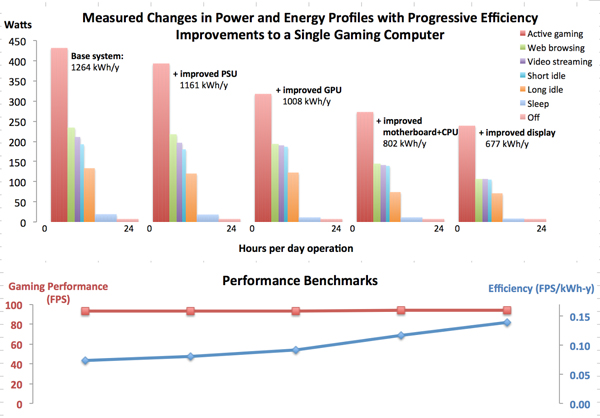 “The huge bottom line here is that gamers don’t have to sacrifice performance to save energy,” Mills said. “You can have your cake and eat it too. In fact, the efficient systems run cooler and quieter, both of which are desirable attributes among gamers.”

The report also estimates that the number of consumers using personalised gaming consoles could double by 2020. A 75% increase in efficiency would save an estimated 75Twh of electricity, worth approximately $18bn.

The Berkely Lab has a history of trying to slash energy from electronics. Last year the Lab delved into the energy consumption of supercomputers.