Labour leadership contender Jeremy Corbyn has announced a far-reaching green vision for his environmental policy in an announcement today (7 August).

The left-wing candidate has set out an environmental policy with 10 pledges emphasising green energy; calling for the breakup and renationalisation of the Big 6 energy firms and a ‘root-and-branch’ review of energy market subsidies.

The Protecting Our Planet manifesto was launched at the eco-hub at Kings Cross in Central London.

The announcement follows reports this morning in edie's sister title Utility Week that Corbyn plans to renationalise the Big Six and National Grid.

In a statement on his campaign website, Corbyn said: “I pledge, if elected Leader of the Labour Party, to meet the challenge of climate change with 10 energy pledges to reform our broken, dated and polluting energy market.” 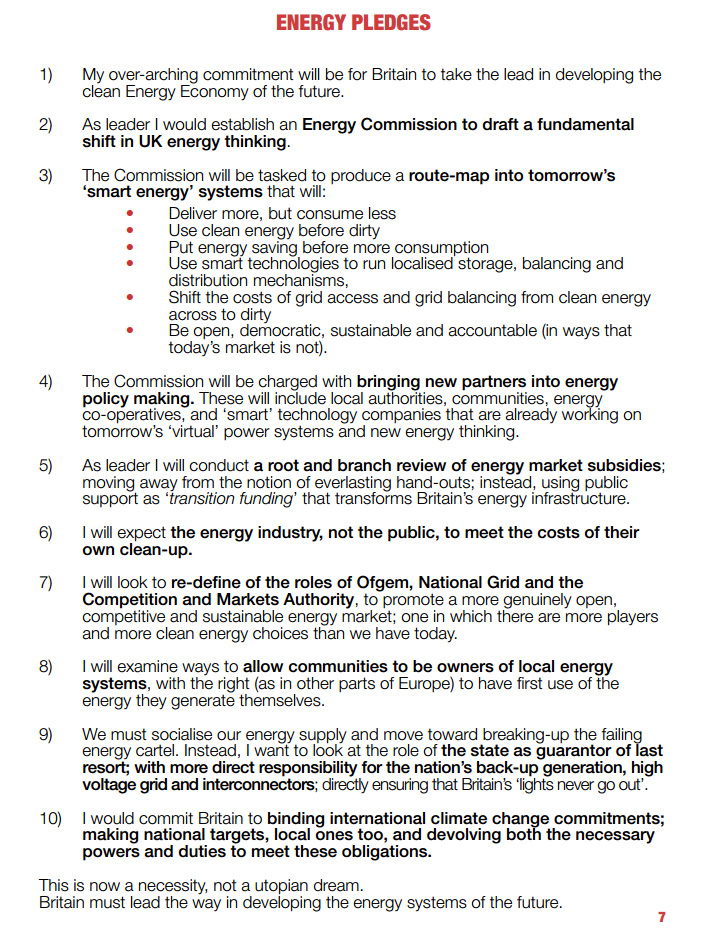 The manifesto sets out Corbyn’s energy and environmental vision in opposition to a number of cuts and policy changes made by the Conservative Government in recent months.

Corbyn singled out the Government’s record on fracking and the cancellation of the Zero Carbon homes policy for criticism in the manifesto. He stated in the pledge he was opposed outright to fracking for shale and to new nuclear.

His pledge for a ‘modern, green, resource-efficient economy’ called for the creation of one million new jobs and his energy pledges included opening new ways for communities to be owners of local energy systems.

The manifesto said it would reverse “The Tories’ ideological restrictions on renewable energy projects” by establishing a National Investment Bank, described as a "Green Investment Bank”, to borrow money and boost the green economy.

Corbyn said: “There is an electoral dimension. To win, we must show we have a modern vision of an innovative country that has a new idea of prosperity and success. Our collective aspirations must lie with a greener vision of Britain. And we must reach out to those voters who care deeply about the environment if we are to build the electoral alliance we need.”

The Islington North MP has also taken a strong anti-nuclear weapons stance and called for the Government to scrap Trident, the UK’s nuclear deterent.

Proud to announce Protecting Our Planet strategy with @AlanSimpson01 - a green economy for growth & sustainablility pic.twitter.com/6ySGn8a0FA

Last month, the Guardian reported Labour leadership rival Andy Burnham had called for a moratorium on hydraulic fracturing, or fracking, for shale gas in the UK until scientific evidence could show it was safe.

But writing in the Guardian today, former Labour cabinet minister and deputy leadership candidate Angela Eagle said the Labour Party itself had repeatedly ignored environmental policy and treated it as an afterthought.

Eagle said Labour had given the Green Party and the Liberal Democrats a “free-run” of the environmental agenda. “The environment isn’t something remote from us,” she wrote. “It’s embedded in our communities, in our homes, our streets, in how we keep warm and what kind of world we hand on to our children. It’s central to this country and I’m determined, as deputy leader, to ensure it’s central to Labour as well.”