Speaking exclusively to edie, Mars' global sustainability director Kevin Rabinovitch said the company was “deep into the process” of discussing an internal carbon price, although nothing had yet been decided.

“We’re considering it for two reasons,” Rabinovitch explained. “One: if you think a carbon price is coming, and all indications are that is the case, then deploying an internal price now can help get your business ready to make these very important decisions.”

“The second rationale, which applies to businesses like ours that are moving proactively on carbon, is it becomes a way of incentivising change in your business.

"Put a price on carbon and bend the economic landscape and drive people where we want to go. It’s a very common practice in business – do your accounting in ways that drives the outcomes you want."

Rabinovitch said much of the discussions so far had centred around what the system might look like in practice.

The 'lightweight' end of the spectrum would simply be adding an ‘imaginary’ price when calculating the returns on an investment. For example, the ROI on a carbon-intensive asset might drop to 10% instead of 17% when its emissions are factored in, even though no money is ever actually charged.

At the other end of the spectrum, the global headquarters of a company could levy a carbon tax on its various business units around the world, based on emissions. These funds could then be reallocated as necessary to boost sustainability programs.

The discussion is particularly pertinent given that the crucial Paris climate change conference is looming, where multiple corporations have been calling for an international carbon price to be established - including Shell, Statoil and BP.

Rabinovitch said that Mars did not back any specific policies at the Paris talks – “that’s for the policy-makers to decide,” he said. But he does want a science-based two-degree target to be adopted.

Mars, which generates more than $33bn in global sales, has been very vocal in its support for a binding agreement at Paris; signing an open letter to global governments last week and joining numerous clean energy campaigns including RE100 and WWF’s Renewable Energy Buyers Principles.

“That’s part of our whole strategy,” said Rabinovitch. “The more vocal and visible we are, the more likely it is to help drive a positive outcome. “If we really believe that climate change is happening, doing our part in our own operations is not enough. We need to help demonstrate to others what’s possible. Because if only a handful of us do our part, we’re still all going to suffer the consequences.”

It is hard to argue that Mars isn’t doing it part. The company has increased its use of renewable energy by 54% in the past year alone, thanks in part to a new Paris-sized windfarm in Texas that powers its entire US operations.

With a target to be fossil-fuel free by 2040, Rabinovitch said that Mars is planning similar renewable energy projects in five or six other countries within the next five years. He pointed out that these massive offsite projects were the ideal power source for large corporations.

He said: “As soon as you go offsite, you can start to aggregate the demand of multiple sites and build even bigger project with better economics, and you can go put it where the wind is really blowing or the sun is shining, and now suddenly we’re talking about renewable energy at cost parity and hey, here we go.”

Mars also expects to be zero-waste-to-landfill across its 130+ factories by the end of 2015, but is likely to miss its water reduction target of 25% from a 2007 baseline. 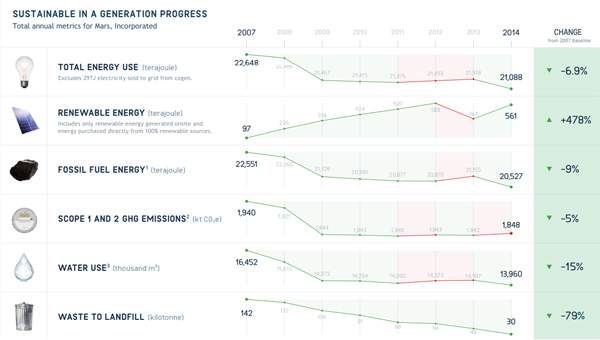 Rabinovitch added: “We’ve struggled slightly because the business case for water efficiency is more difficult because water is so underpriced by the market that’s its really challenging to find clever ways to reduce water usage in a scalable way.

“Its very important that we find business-case solutions for these problems, not because we’re unwilling to spend money on this issue, but because we know we can’t replace an environmental problem with an economic one - that’s not a scalable solution."

Earlier this week, edie reported that Mars Bars containing Fairtrade-certified cocoa had gone on sale in the UK and Ireland for the first time. Read more here.