The world's bestselling electric car manufacturer Nissan has teamed up with energy powerhouse Enel to revolutionise the EV market by allowing drivers to act as 'energy hubs' with the ability to store and send back excess electricity to the grid.

Trials have begun in Denmark using Nissan LEAFs to develop a ‘Vehicle 2 Grid’ system that aims to integrate EV owners and fleets into the grid by charging the cars at low-demand times with cheap tariff periods.

Energy generated during these periods can then be stored at home or fed back into the grid to generate greater returns.

“Our pioneering partnership with ENEL is a perfect example of those plans, taking the car beyond a pure road vehicle, and using it to charge your home or office. It ultimately means that electric vehicles can now become a fully integrated part of our national electricity systems right across Europe.” 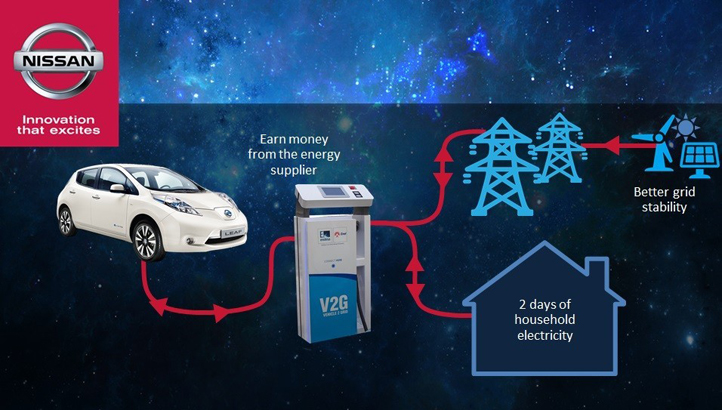 If the trials in Denmark are deemed successful, deployment will branch out to Germany, Netherlands and other areas of Northern Europe.

Using France as an example Nissan explained that the current 130GW capacity for the 38 million strong EV sector could triple to 380GW of capacity if the Vehicle 2 Grid system was implemented.

A similar idea was mooted by scientists back in September, using underground wire coils to wirelessly transfer the energy.

The prospect of futuristic fuel station has also taken a step closer to reality with Nissan revealing a new teaser video for the ‘Fuel Station of the Future’ concept in collaboration with architects Foster + Partners.

David Nelson, Head of Design, Foster + Partners: “As we look ahead at the next 10 years, autonomous cars, artificial intelligence and greater connectivity will come at great pace – and it is our job as architects to inspire and support that change.”

“Pre-empting those developments and integrating technologies to offer urbanites a totally seamless experience is vital, if we are to succeed in creating cities that serve us.”

Nissan announced the partnership with Foster + Partners to create the Future Fuel Station back in August.

The two announcements strengthen Nissan’s ideologies of the future of EVs which has seen the company unveil concepts for what it calls 'the future of autonomous driving and zero emissions'.