The Scottish Government has been called upon to act as a catalyst for the uptake of solar power in Scotland, with new figures revealing that the PV sector rose by more than a quarter in 2015.

Solar capacity in Scotland has increased by 8,850% against 2010 figures

WWF Scotland and the Solar Trade Association's (STA) Scotland branch have published the new figures, revealing that total installed capacity of solar photovoltaics in the country had risen by 39MW - to a total 179MW capacity - representing a 28% increase from December 2014.

WWF Scotland director Lang Banks said: “Despite the challenges facing the industry, it’s fantastic to see so many homes and businesses embracing solar power. Collectively these solar panels are helping to prevent thousands of tonnes of climate-damaging emissions being emitted every year.

“Following the recent conclusion UN climate talks in Paris, alongside energy saving measures, we’re going to have to see an even greater uptake of solar and other renewable technologies here and globally. We therefore call upon the Scottish Government to do all that it can to help ensure Scotland switches on to the full potential of solar power.”

According to Ofgem, more than 40,000 homes and 850 businesses in Scotland are now fitted with solar PV arrays. As a result, solar capacity has increased by 8,850% against 2010 figures.

John Forster of STA Scotland said: “It’s great to see the use of solar power continue to grow. Scotland's new building regulations are a great example of where Scotland is leading the way, as they are helping to increase the uptake of solar on thousands of new homes every year.

"This is very much in contrast to the scrapping of the Zero Carbon Homes target by the Westminster Government.

“However, as new homes make up a tiny fraction of our housing stock, it’s critical we find a way to encourage the use of solar on existing buildings too. We’d like to see the Scottish Government bring forward measures to encourage much greater uptake of solar power on the many more existing homes and buildings.”

The ongoing rise in solar PV is going a long way in helping Scotland reach its target of generating the equivalent of 50% of its energy from green sources – a halfway marker for 100% green production by 2020.

Stats from the latest quarterly Energy Trends report published by the Department for Energy and CLimate Change show that the renewables sector generated 49.7% of electricity for Scotland in 2014 up 12% since 2013. 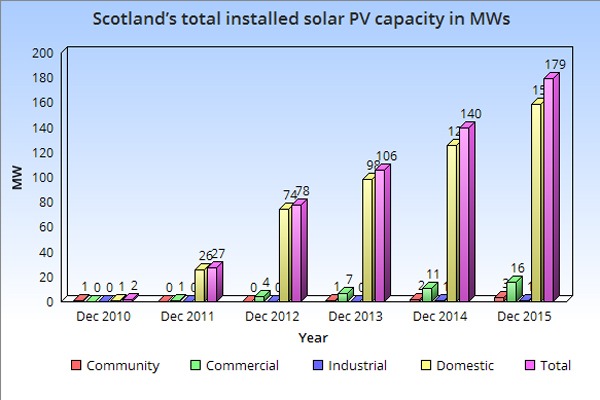 “While we are now almost half way to our 2020 goal of producing the equivalent of 100% of our electricity from renewables, the second half of the target is going to be much harder to achieve than the first.

“To see further progress, both the UK and Scottish Governments must now put renewables at the heart of their energy policy in terms of cutting carbon emissions, reducing bills for consumers and increasing our energy security.”

Last year, an unexpectedly warm September saw enough sunshine in Scotland to provide more than 70% of the electricity and hot water needs of the nation's homes fitted with solar panels.