Researchers have urged the UK Government to establish a lead department dedicated to developing new clean-cold technology as a new report highlights the rising demand in cooling and refrigeration systems.

The ‘Doing Cold Smarter’ report, published today (28 October) by experts from the University of Birmingham, warns that current poor standards of cold storage combined with a worldwide increase in demand will raise GHG emissions by more than 1.5 billion tonnes a year within 15 years - three times the current energy emissions of Britain.

The report also claims that a lack of adequate systems has led to two million preventable deaths each year as well as leading to the loss of 200 million tonnes of perishable food in developing markets.

Toby Peters, chief executive of global technology firm Dearman and visiting professor of power and cold economy at the University of Birmingham, said: “Cold is essential to modern life – yet it remains the Cinderella of the energy debate. It’s overlooked, under resourced and all too often relies on energy intensive, inefficient and polluting technology.

“If we are to meet the booming global demand for cold, without creating unintended environmental consequences, then we must learn to do cold smarter.

“Britain has a unique opportunity to lead this clean cold revolution, by developing new technologies and establishing know-how, which can be exported around the world. But we must act now and the Government has a crucial role to play in turning the UK into a global shop window for our cutting-edge technology and world-class expertise."

The report specifically calls for the UK Government to establish a department body to champion innovation and development in the sector. This body should conduct a Technology Innovation Needs Assessment (TINA), similar to current heating analysis, which could reduce UK energy costs by up to 66bn.

The Government should also develop rigorous system level analysis and the environmental and financial impacts that a cold economy could develop, the report claims. 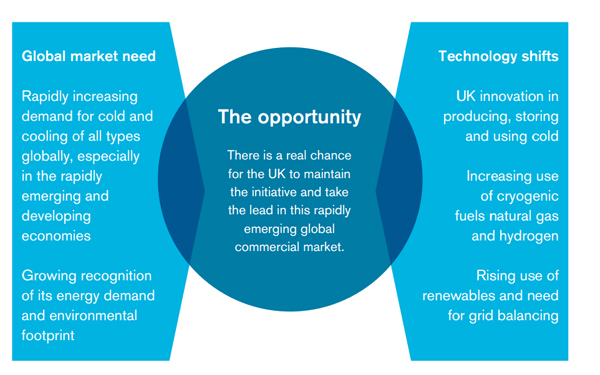 The report calls for the implementation of these "urgent requirements" in the wake of revelations this week that worldwide demand for cooling could overtake heating by 60% by 2060. Meanwhile, refrigerated fleet vehicles are set to rise in demand, from four million to 18 million by 2025, at a cost of £22bn.

Currently, refrigeration and air conditioning account for 10% of global CO2 emissions, more than three times that of the aviation sector. Not only could a new cold economy lower emissions but, as the report states, it could also tackle issues surrounding food waste, water conservation, public health and data collection.

The report echoes calls from the Carbon Trust for the UK Government to seize the opportunity of becoming the global leader in developing low-carbon cooling technologies. Seperate research from the Institute for Governance and Sustainable Development (IGSD) earlier this year also found that improving the energy efficiency of air conditioning would have huge beneficial impacts on the climate.

IGSD highlighted that up to 100 billion tonnes of CO2 could be saved by 2050, preventing a potential 1,200GW of electricity production, and halting up to 0.5 degrees of global warming alone.