With less than five months to go until COP26, this new series from edie will provide a regular temperature check of global climate action from nations and businesses.

After a string of important climate decisions were deferred to COP26 at the Chile-Madrid COP25 summit in 2019, this year’s event will see nations finalise the Paris Agreement ‘rulebook’ and update climate commitments in light of the updated science which has fuelled the global net-zero movement.

The Conference is also the first since the US re-joined the Paris Agreement and since China pledged to deliver peak emissions by 2030 and carbon neutrality by 2060. In other words, the world’s two biggest emitters are back at the table.

Moreover, it’s not just the main negotiations that are making headlines. Businesses across the UK and beyond are preparing for COP26 with thousands of new science-based climate commitments; dozens of new collaborative initiatives, and what seems to be a greater willingness to call for tighter environmental policies.

With all of this in mind, edie has launched this COP26 Action Tracker – a regular round-up of the policy and business preparations being made here in the UK and across the world. The key elements of the Tracker will be updated every two weeks with all of the need-to-know updates ahead of the November talks.

In this first edition of the Tracker, we recap the key happenings at last month’s G7 Summit and meeting of the UN Framework Convention on Climate Change’s (UNFCCC) subsidiary bodies, known as SB2021. 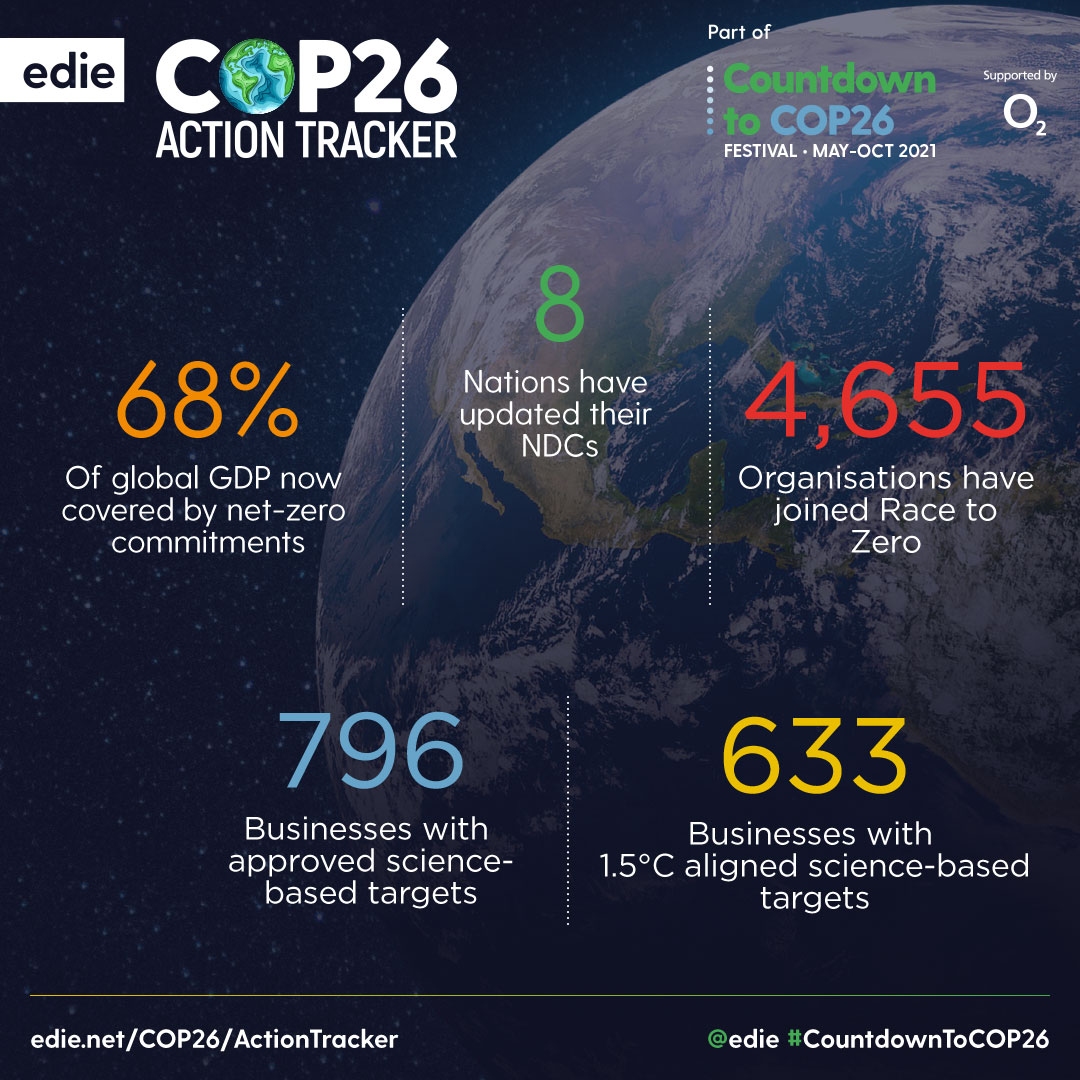 On domestic decarbonisation, the green economy is growing impatient in awaiting the Heat and Buildings Strategy and Hydrogen Strategy – both promised in autumn 2020 – and the Transport Strategy, promised in winter 2020. The absence of these announcements has prompted fresh calls for urgency from the Climate Change Committee (CCC).

However, the National Infrastructure Bank (NIB) has finally launched, with tackling climate change as part of its core mission and strategic objectives and there is a new green infrastructure commitment to ensuring that all major infrastructure projects have a net-positive impact on nature. Green groups are still pressing for more specifics on how loopholes will be avoided in both cases.

The Welsh Government, meanwhile, has created a new ‘super-ministry' in the hopes of delivering a joined-up policy approach to the net-zero transition. The body will operate for at least five years, bringing together those working on energy, transport, nature, planning and housing.

Last month saw the G7 Summit along with the meeting of the UN Framework Convention on Climate Change’s (UNFCCC) subsidiary bodies, known as SB2021.

At the G7 meeting of Finance Ministers, Chancellor Rishi Sunak worked with peers to ensure that the nations will mandate climate finance reporting in line with the recommendations of the Taskforce on Climate-related Financial Disclosures (TCFD) in the coming years.

The final communique from the G7 commits members to:

You can read edie’s coverage of the G7 outcomes in full here.

Outside of G7, the EU has approved a new climate change adaptation strategy through to 2050. The strategy was first unveiled back in February.

Meanwhile, Joe Biden’s proposal for a $2trn green jobs plan – with the majority of the funding going to low-carbon industries and the decarbonisation of existing infrastructure – is reportedly facing opposition from the Republican Party and some Democrats despite strong support from the general public. The bipartisan alternative is worth $1.2trn, of which less than half can be badged as ‘green’.

And elsewhere, local authorities in Poland have applied for a share of the EU’s Just Transition Fund to support the closure of the Belchatow coal plant – described as the most polluting in Europe – between 2030 and 2036.

SB2021 was never intended to be a stage upon which new policies were announced. However, observers have described progress as “pretty slow, if not non-existent”, according to Carbon Brief.

The Prince of Wales’s Sustainable Markets Initiative presented Ministers at the G7 with a tool enabling users to compare the investment pipelines for specific green technologies and a set of ‘market signals’ that governments can use to track and encourage private investments in manners compatible with long-term climate and nature targets. They also outlined plans to create ten new ‘transition coalitions’ to assess how investment must be scaled to decarbonise high-carbon sectors.

The Investor Agenda, supported by more than 450 investors who collectively manage around 37% of the global total of assets by value, issued a statement outlining “priority” climate policy actions for nations ahead of COP26. Then, 70 executives, convened by the World Economic Forum’s (WEF) Alliance of CEO Climate Leaders, published a similar open letter.

Major businesses including Salesforce, Amazon, Netflix, Unilever and Microsoft launched the Business Alliance to Scale Climate Solutions (BASCS). With the support of the Environmental Defense Fund, the UN Environment Programme and WWF, BASCS will work to scale nature-based and man-made solutions.

Hot off the heels of London Climate Action Week, the pre-summit for the UN's first Food Systems Summit is taking place in Rome from 26-28 July.

It is also worth noting how climate adaptation and resilience has been rising up the global agenda. The UK’s CCC recently published its third national climate risk assessment and the headline conclusion is that climate-related risks are increasing in number and magnitude more rapidly than expected, with the UK largely underprepared for even the best-case scenario.

In terms of the logistics of COP26 itself, representatives from the UK Parliament and Scottish Government this week began an inquiry into whether Glasgow is prepared to host the event.

"Between now and COP26, the world will look for delivery, not promises.”