'The moment we decided to save our planet': US and China ratify Paris climate deal

"History will judge today's effort as pivotal," proclaimed President Barack Obama as the US and China both officially ratified the Paris Agreement on climate change, marking a major breakthrough in the battle to limit global warming.

The two nations - together responsible for around 40% of the world's carbon emissions - made the announcement on the eve of the G20 summit in China, putting pressure on other G20 nations to move faster with the ratification of the Paris Agreement.

“Where there is a will and there is a vision and where countries like China and the United States are prepared to show leadership and to lead by example, it is possible for us to create a world that is more secure, more prosperous and more free than the one that was left for us,” said Obama, who was speaking in the presence of the Chinese President Xi Jinping and United Nations (UN) Secretary General Ban Ki-moon.

When in full force, the Paris climate deal essentially commits countries to aspire to keep temperatures below 1.5C above pre-industrial levels and for richer nations to continue giving climate aid to poorer nations beyond 2020. 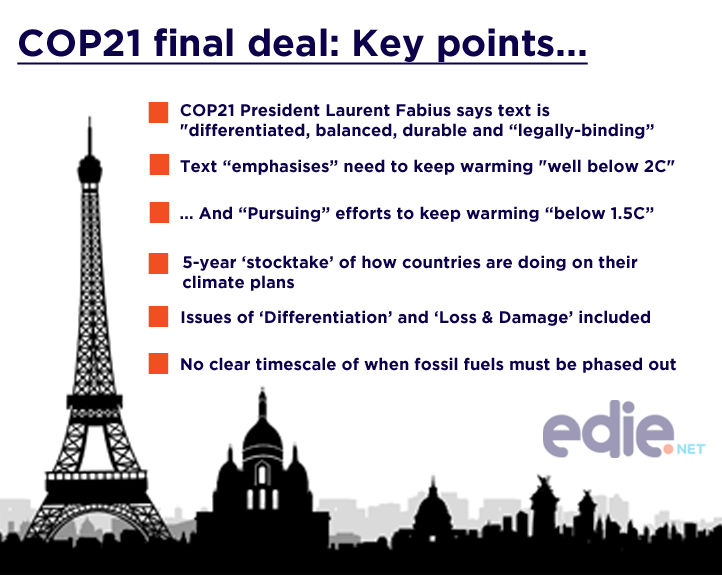 After being agreed in Paris less than nine months ago, the deal needs to be officially ratified by at least 55 countries, which between them produce at least 55% of global carbon emissions, to come into force. Before China and the US confirmed their long-awaited ratification today, 180 nations had signed the Agreement, but just 24 nations - accounting for just over 1% of global emissions - had actually ratified it.

In the UK, campaign groups are now calling on Prime Minister Theresa May to ratify the climate deal, with Greenpeace organising a petition that has gathered more than 100,000 signatures. Regardless of 'Brexit', the UK falls under the EU's 'national-determined contribution' to the deal; with a target of cutting emissions by 40% by 2030 based on 1990 levels.

Yesterday (2 September), edie reported that London Mayor Sadiq Khan joined other mayors of major cities within the G20 group of nations to call upon leaders to take urgent action on climate change, and speed up the ratification of the Paris Agreement on climate change.

US and China ratify Paris Agreement: The reaction

Today's US-China announcement has been welcomed by climate campaigners around the world as a significant advance in the global warming mitigation efforts. Read the full reaction below: -

“The world finally has a global climate agreement with both the US and China as formal Parties. This signals a new era in global efforts to address climate change. Both countries now need to scale and speed up their efforts in charting a future that avoids the worst impacts of climate change."

“This announcement is hugely important. The leadership of China and the United States is crucial to taking the Paris Agreement forward. They bring significant additional momentum to keeping global warming under 2C.

“And by putting the well-being of our planet at the top of the agenda, the two largest economies in the world are also showing that our economic future is low-carbon and green.

“The fight against climate change remains difficult and urgent, but having heavy-hitters like China and the US on your side is extremely heartening.”

“The joint announcement between the US and China means that the commitments contained in the Paris Agreement are set to become real laws in major economies. The regulatory environment for business is about to change in ways that will define the global economy for decades to come.”

“The world’s two largest emitters have joined the Paris Agreement not out of charity or altruism but because it makes economic sense for both of them. The Paris Agreement doesn’t just offer the possibility of a safer world for future generations. It promises new jobs and industries in the low carbon economy. With China and the US on board, we can expect the rest of the world to follow, and bring this vital agreement into force as early as possible.”

“That two of the world’s biggest emitters of greenhouse gases are moving to ratify the landmark Paris climate change agreement is really significant and exciting news. There’s now a strong likelihood that it will come into effect this year, which for a major international agreement of this sort is fast.

“It shows that the big countries are taking the Paris deal seriously and are committed to stepping up the world’s drive to tackle the risks posed by climate change. It’s also likely that states like China, which is rapidly becoming a global powerhouse for renewable energy, can see the positive opportunities that effectively addressing the problem do bring.

“There’s no reason now for the UK not to ratify the agreement as soon as possible. Doing so would help cement our reputation for leadership on climate change and send a strong signal to countries globally that we’re looking to build stronger links with in a post-Brexit world that we’re working with them towards a common goal.”

“This marks the moment the two biggest economies throw their weight behind the Paris Agreement. It means the deal, agreed less than nine months ago, will now likely have the full force of law before the end of the year.

“This choreographed announcement shows that the US and China are still working together collaboratively to address climate change. And it shows how far we’ve come from the days when they were both at the back of the class, dragging their heels.”

Alden Meyer, director of strategy and policy, the Union of Concerned Scientists

“Today’s announcement, coupled with other key countries signaling intentions to take similar action, all but assures the Paris Agreement will take effect this year. Logistically, negotiations on the agreement’s detailed rules will likely take another year or two to finalise, and all countries will need to raise the ambition of their commitments under the agreement if we’re to avoid the worst impacts of climate change and reach a goal of net zero global warming emissions by mid-century.

"But this is an important step forward that reinforces the U.S. and China’s continued leadership in building a robust, durable international climate framework.”

“Ceres commends the US and China for formally joining the Paris Agreement on climate change, and calls on all nations to take the same step this year. Today’s action sends a powerful signal to the markets that the shift to a low-carbon, clean energy economy is now accelerating and the rest of the world should be getting on board.

“As we celebrate this leadership from the world’s two largest economies, we must build on momentum and ratchet up global investments in clean energy by an additional $1 trillion a year to achieve the Paris accord’s objective of limiting global temperature rise to well below two degrees. Investment in clean energy today are tracking at $300-$350 billion a year, which is far short of Ceres’ Clean Trillion goal.