Onsite renewable arrays and low-carbon packaging innovations have helped Carlsberg to achieve a 20% reduction in its relative carbon emissions since 2015, as it strives to become a 'net-zero' carbon business by 2030. 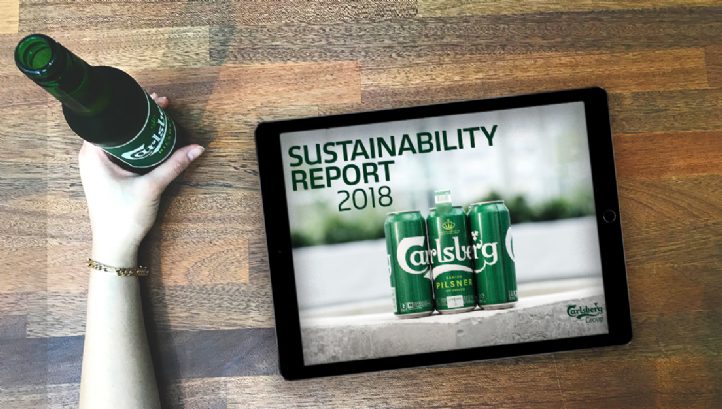 Carlsberg is one of four companies to have set science-based targets in line with 1.5C

The Danish brewer this week unveiled its second sustainability report since the launch of its Together Towards Zero strategy, which targets zero water waste and includes science-based targets aligned to the 1.5C aims of the Paris Agreement as key goals.

Published on Wednesday evening (6 February), the report states that Carlsberg has reduced its relative carbon footprint by one-fifth since 2015, putting it on track to meet its 2030 carbon goals. This progress, the report states, has largely been driven by a shift towards renewable energy, compounded by the introduction of several innovative products and packaging lines.

Carlsberg used 100% renewable energy to power its 29 breweries in Western Europe for the first time in 2018, with power sourced from a mixture of onsite solar arrays and through power purchase agreements (PPAs), the report states.

This shift means renewables now account for one-fifth of the company’s total energy usage, up from 18% in 2017. Its coal usage, meanwhile, has fallen by 78% since 2015, with all breweries and factories globally on track to achieve ‘zero-coal’ status by 2022.

Given that packaging production, disposal and transportation accounted for 40% of Carlsberg’s supply chain emissions in 2015, a further key driver of carbon reductions was the introduction of several packaging innovations.

These include Cradle to Cradle Certified™ silver inks on bottle labels, shrink wrap containing at least 50% recycled plastic and the ‘Snap Pack’ concept – where traditional plastic multi-pack packaging is replaced with a recyclable glue that sticks the cans together. The brewer has also redesigned its range of 500ml glass bottles so they weigh 10% less – a move which has helped to decarbonise both the manufacturing and transportation processes.

“I’m pleased with the progress on our sustainability ambitions since the launch of Together Towards Zero in 2017. But as I look back at 2018 and forward to 2019, I am keenly aware of our responsibility to act. We’ll continue to sharpen our focus and accelerate our journey towards zero to emphasise that a successful business is a sustainable business.”

The report comes at a time when Carlsberg is increasingly turning to innovation to decarbonise its operations. The firm last year retrofitted its Sverige brewery in Falkenberg to run completely off of biogas and renewables, making it the company’s first carbon-neutral brewery.

It has additionally run a string of initiatives aimed at engaging consumers with its environmental sustainability efforts, including trials of a “climate-friendly” bar and a carbon-neutral mini-pub.

Despite making strong progress towards its carbon and waste goals, Carlsberg’s latest report highlights the fact that it is currently off track to meeting its 2030 goal of helving water usage and achieving zero-waste status for water.

The company last year maintained its 2017 average water efficiency of 3.1 hectolitres (hl) per hl of production, with its water use plateauing. For breweries located in the high-risk areas, predominantly Asia, Carlsberg is aiming to reduce water consumption below 2 hl/hl by 2030, well below the global best practice average of 3.4hl/hl.

In a bid to spur further and more rapid progress, Carlsberg last year refined its water waste roadmap to include a detailed action and investment plan from 2018-2022 and 2023-2030. The roadmap places an increased focus on emerging technologies in the water-saving space and highlights the company’s role in creating Europe’s first beer made using 100% recycled waste water.